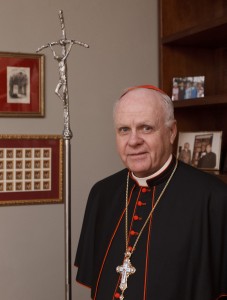 Cardinal Edwin F. O’Brien, grand master of the Knights of the Holy Sepulcher, is pictured near a replica of Blessed John Paul II’s crosier and other personal mementos in his residence at the Vatican Nov. 24. (CNS photo/Paul Haring)

VATICAN CITY (CNS) — On the eve of his first trip to the Holy Land as grand master of the Knights of the Holy Sepulcher, Cardinal Edwin F. O’Brien said he hoped to encourage the region’s Christian minority with a message of solidarity from Pope Benedict XVI and other Catholics in the West.

“The church in the Holy Land has been under unfriendly domination throughout the centuries, and the fact that we still exist there is almost a miracle,” Cardinal O’Brien told Catholic News Service Nov. 24. “We have to do everything we can as a Catholic people to encourage them and to let them know that we are one with them in their struggle.”

The cardinal, a former archbishop of Baltimore whom Pope Benedict named to lead the chivalric order in August 2011, left Rome Nov. 26 for a weeklong pilgrimage whose itinerary was to include Jerusalem; Bethlehem, West Bank; and Amman, Jordan. He was scheduled to meet with Jerusalem’s Latin Patriarch Fouad Twal, who serves as the order’s grand prior, and other Catholic, Orthodox and Muslim leaders.

The cardinal also planned to visit a few of the more than 100 institutions that the knights support in the region, including parishes, schools and Bethlehem University.

Cardinal O’Brien was not planning to visit the Gaza Strip and said he did not expect the recent fighting there to affect his visit, which was planned almost a year ago. But he noted that Patriarch Twal has been on the “front lines” in aiding victims of the violence there.

Eight days of Israeli airstrikes, launched in retaliation for rocket attacks by Palestinian militants, killed more than 150 people and destroyed thousands of dwellings in Gaza before both sides agreed to a cease-fire Nov. 21.

“The church does not take one side or the other” in the conflict, the cardinal said, “but simply says, do whatever we have to do to bring about peace and a secure way of living for all the people in that land that Christ walked.”

Cardinal O’Brien noted that the church’s charitable and educational activities in the Holy Land often serve a greater number of Muslims than Christians, which he said helped the cause of peace.

He particularly noted the contribution of Christian Brothers-run Bethlehem University, in the West Bank, to interreligious harmony.

“More than half the students over the years have not been Christian,” the cardinal said. “And they graduate to leading positions in the Holy Land. Their gratitude to the church and their influence in building bridges between Islam and Christianity, we just can’t measure the worth of that.”

“We don’t do it so that we can get credit,” he said. “We do it so that the dignity of every human being will be developed to its highest potential. Bethlehem University, Madaba University, our high schools — all the good work that our people far away are doing to support these institutions is going to pay great dividends in the decades ahead.”

PREVIOUS: Catholics on both sides of Gaza border pray for hostilities to end

NEXT: Vatican says it will promote religious liberty in Saudi-backed center