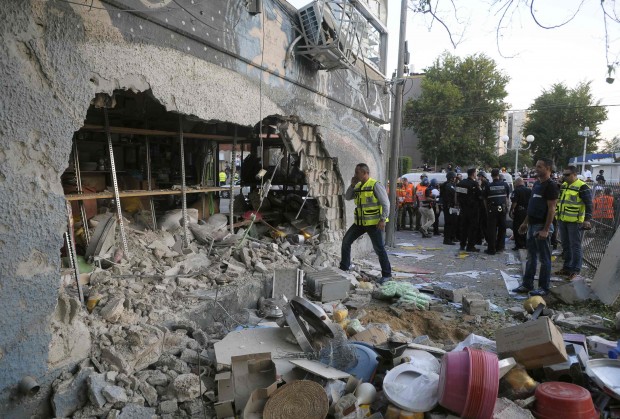 An Israeli municipality worker speaks on his phone as he surveys the damage after a rocket fired from the Gaza Strip landed in the southern city of Ashdod Nov. 20. As talks intensified regarding a possible cease-fire between Israel and Hamas, the Islamist group that controls Gaza has been pressing for an end to an Israeli blockade as a condition for halting rocket attacks on Israel. (CNS photo/Avi Roccah, Reuters)

JERUSALEM (CNS) — As diplomatic efforts were underway to reach a ceasefire agreement between Hamas and Israel Nov. 20, Catholics on both sides of the Gaza border prayed for peace.

“When we pray for peace, we pray for peace for everyone,” said Father Yoel Salvaterra, who serves the Hebrew-speaking Catholic community in the southern Israeli city of Beersheba, after a morning in which more than 20 rockets landed in the city. “Our prayers have no borders. We know we are suffering here and they are suffering there. It is just suffering.”

Egypt was reported to have been brokering a cease fire agreement between Hamas and the Israeli government late Nov. 20, according to news reports.

The parish celebrated Mass Nov. 18 in the church bomb shelter, Father Salvaterra said, and only 15 people came to pray, about half the normal number. The community has about 150 members.

“People live in fear,” he said. “Everybody is staying home. Sometimes they call me for assurance, sometimes I call them. The situation has not been easy as even before the Israeli operation we suffered from rockets once or twice a month. The uncertainty was difficult.”

Though several homes in Beersheba took direct hits from the rockets, no one from the community has been injured, he said.

Going to Sunday Mass is a way of supporting one another and finding strength through prayer, said Rafoul Assy, 50, who hails from the northern all-Melkite village of Fassuta and has lived in Beersheba for more than 20 years. Although Assy was unable to attend Mass because of his work, he said his wife and four children found comfort in the familiar routine of the prayers.

“The Mass itself took only three-quarters of an hour but they stayed there for over an hour talking to the other people,” said Assy, whose four children range from 4 to 14 years old. “It is difficult for the children. They spend their days in the bomb shelter. Every time there is a siren the little one grabs the iPad and runs to the shelter. They are afraid.”

In Gaza, George Antone, 31, project manager for the Pontifical Mission for Palestine and father of a 6-month old daughter, told Catholic News Service Nov. 20 that people are staying home because it is too risky to leave. No one knows where Israel’s bombs may land next, he said.

“It can be anywhere, between houses, in government institutions, schools, universities, a football field,” he said. “The situation here is terrible. Last night it was as if we were living in hell. Every 15 minutes you could hear an explosion.”

One member of Holy Family Parish in Gaza died of a heart attack during a bombing and had just been buried at the church cemetery, he said. Otherwise, people leave their homes only to get essentials. Supplies such as fuel and bread are running low because flour can’t be delivered to the bakeries, he said.

“I don’t like the killing on either side. I respect life,” Antone said. “This is not the way in which we can find a solution. Peace never comes with blood. That is what we say to the people in church. This will lead to nothing only a very bad scenario on both sides and the people will pay the price.”

He added that he sees the conflict between Hamas and the Israeli government as not only political but also one stemming from religious fanaticism from both Muslims and Jews.

“We Christians are not political, we call for peace and to save lives,” Antone said. “This conflict will lead to nothing. We pray a real truce will be reached and then afterward they have to start negotiating for peace. That is the only way to solve the problem. They have to sit and speak and find a way where there will be no war for our children and the coming generations.”

One Catholic Gazan, who asked not to be identified, said he and his family had not left their home for almost a week.

“The explosions are terrible for us,” he said. Although the family’s pantry was well-stocked, he said family members have little appetite under the dangerous circumstances.

Though some people may disagree with Hamas’ tactics “nobody can say anything against Hamas,” he said.

“They are in control. You have to say yes, whoever says ‘no’ will end up saying ‘yes’ later,” he said. “You have to walk with your back very close to the wall. You have to be careful.”

In a Nov. 19 report Sami El-Yousef, regional director for the Catholic Near East Welfare Association’s office in Jerusalem, noted widespread destruction in Gaza and said almost all of the Christian institutions have sustained some damage from the shelling in the form of broken glass and doors.

He said children and the elderly are paying the heaviest price and called for prayers that the hostilities would end as soon as possible. 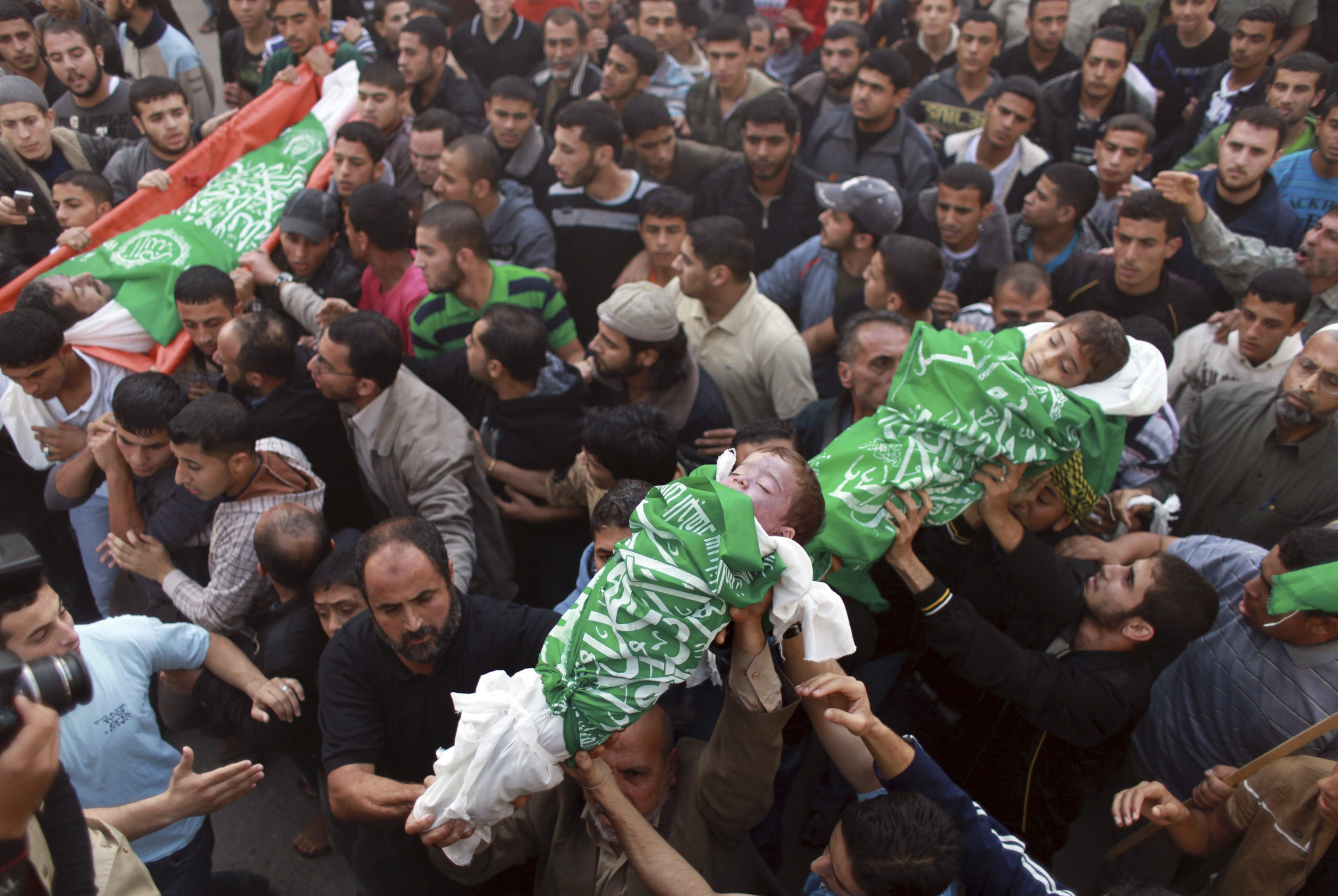 Palestinians carry the bodies of two children and their father during their funeral in Beit Lahiya in the northern Gaza Strip Nov. 20. They were killed when an Israeli airstrike in the Gaza town of Beit Lahiya destroyed their home Nov. 19, the Hamas Health Ministry said. (CNS photo/Mohammed Salem, Reuters)