Christians, Hindus must educate young to be peacemakers, Vatican says 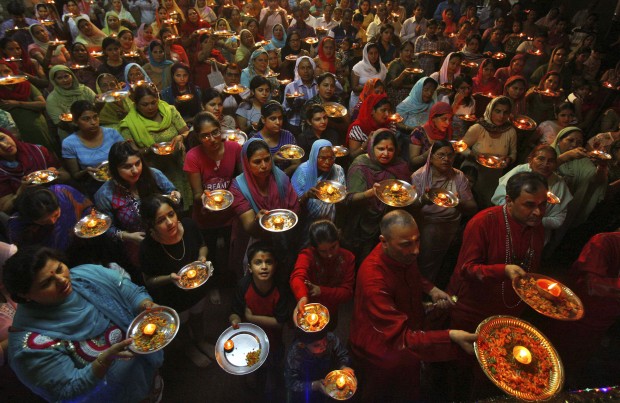 Hindu devotees hold oil lamps as they pray during a religious festival at a temple in Chandigarh, India, Oct. 16. (CNS photo/Ajay Verma, Reuters)

VATICAN CITY (CNS) — Christian and Hindu parents, teachers and religious leaders must educate young people to recognize and resist ideologies that teach disrespect for certain groups of people and sow divisions in society, said the leaders of the Pontifical Council for Interreligious Dialogue.

Extending their best wishes to the world’s 1.1 billion Hindus for the feast of Diwali, Cardinal Jean-Louis Tauran and Father Miguel Ayuso Guixot, respectively the president and secretary of the council, called for greater efforts to support young people’s yearning for a better world by educating them to be peacemakers.

The message to Hindus was released Nov. 8 by the Vatican.

Diwali, a three-day religious festival, was to begin Nov. 13 in most parts of the world. The festival focuses on the victory of truth over lies, light over darkness, life over death and good over evil.

As the primary educators of children, the message said, parents obviously have the first responsibility for equipping their children to be peacemakers. Parents “have the unique privilege of forming their children in values that are essential for peaceful living: mutual trust, respect, understanding, listening, sharing, caring and forgiving.”

But religious leaders, too, have a special role, particularly because they are called to be spiritual and moral guides, the message said.

“If peace is to be authentic and enduring, it must be built on the pillars of truth, justice, love and freedom, and all young men and women need to be taught above all to act truthfully and justly in love and freedom,” it said.

The majority of the world’s Hindus live in India, where in the recent past, Christians have endured violence at the hands of Hindu militants trying to assert their vision of a Hindu India and painting Christianity as a recent foreign import despite its centuries of presence in the country.

In their message, Cardinal Tauran and Father Ayuso said that in efforts to educate people for peace, “cultural differences ought surely to be treated as a richness rather than a threat or danger.”