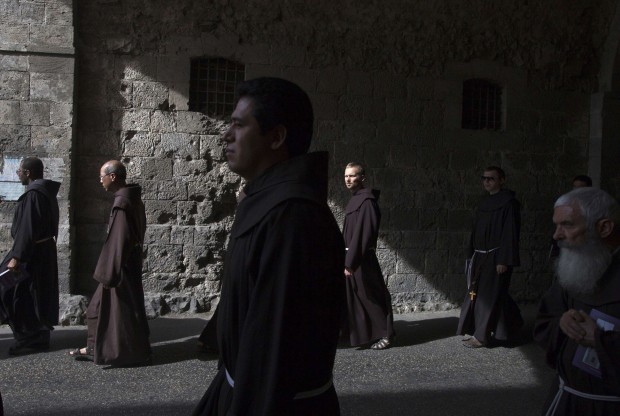 Franciscan friars walk inside the Church of the Holy Sepulcher in Jerusalem Nov. 2. A dispute over an unpaid water bill reportedly running to $2.3 million could threaten the daily functioning of the church, one of Christendom's most holy sites. (CNS photo/Baz Ratner, Reuters)

JERUSALEM (CNS) — A dispute over an unpaid water bill reportedly running to $2.3 million could threaten the daily functioning of the Church of the Holy Sepulcher, one of Christendom’s most holy sites.

The dispute stems from a unilateral cancellation of a long-term agreement — dating to Turkish rule — which exempted the Church of the Holy Sepulcher from paying for the water it used, according to a well-informed source who did not want to be named. The church has a copy of a signed 1969 letter outlining the agreement, he said, and has made copies available to the municipality.

He said negotiations over payment of the bill had been going on for some two years but in late October the municipal water company, Hagihon, froze the Greek Orthodox Patriarchate’s bank account and, according to a report in the Israeli Maariv newspaper, the patriarchate was threatening to close its doors.

An official at the Greek Orthodox Patriarchate told the British news agency Reuters that the patriarchate was willing to pay water bills from now on but that the accumulated debt “would be problematic.”

In the meantime, the patriarchate is unable to pay salaries for its employees or pay for food, toll road charges or their electric and phone bills.

“It doesn’t make sense to us to be asking to pay a retroactive bill that the municipality has a written commitment (not to charge),” said the source.

He said the payment was not the issue but rather the unilateral cancellation of the traditional agreement. He said demanding payment was tantamount to breaking the historic Status Quo agreement, which determines the details of how the church is run.

He said Christian church leaders have been having “extensive meetings” among themselves to determine what steps they should be taken next.

A spokesman for Hagihon said it has held talks and meetings with representatives of the churches “for years” and had suggested the Greek Orthodox Patriarchate turn to the Ministry of Interior with its concerns, since the law does not allow the company to make exceptions.

He said the church was being charged retroactively only since 2004, when the company was formed.