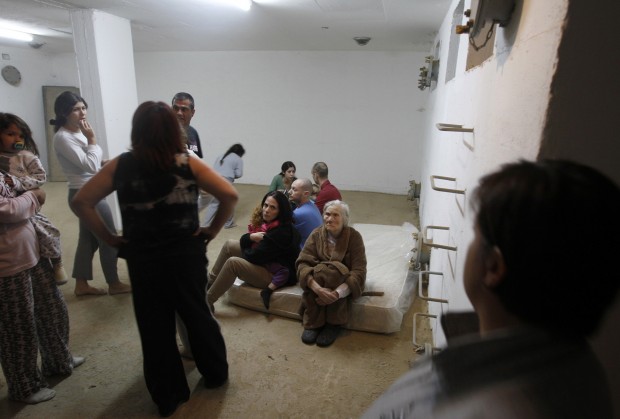 JERUSALEM (CNS) — The Israeli government and leaders of Hamas must make courageous decisions to end the violence that has once again forced residents of Southern Israel into their bomb shelters and residents of the Gaza Strip into their homes, said Auxiliary Bishop William Shomali of Jerusalem.

“We are sad for this escalation. It does not lead to peace but only leads to more violence,” Bishop Shomali told Catholic News Service Nov. 16. “This is a vicious circle of violence and (retaliation) is really not the solution. Courageous decisions need to be taken from the part of Israel and also on the part of Hamas not to remain in the circle of retaliation.”

He said simultaneous international intervention from Egypt and the United States is needed if the violence is to stop.

“Left alone, Israel and Hamas will remain in a circle of retaliation,” he said.

“The most important thing is to find a comprehensive solution to the whole Palestinian-Israeli conflict; if not, we will remain with the same retaliations and the same problems,” he said.

Israel’s Ministry of Foreign Affairs said some 120 rockets were fired into southern Israeli communities from Nov. 10 to Nov. 14, when Israel launched air strikes that targeted and killed Hamas military leader Ahmed Jabari. More than 20 Palestinians and at least three Israelis have died in the violence.

In a Nov. 15 statement, Jerusalem’s Latin Patriarch Fouad Twal expressed his “deep concern” at the escalation, reiterating that violence will not solve the crisis. Only a global solution can find a resolution to the conflict, said a statement from his office.

“In this particular tense context the patriarch is in solidarity with all victims who are at the center of his thoughts and prayers,” the statement said. “He also prays that all those in position of responsibility in this situation do not give in to hate.”

Sami El-Yousef, regional director for the Catholic Near East Welfare Association’s Pontifical Mission office in Jerusalem, said he has been in touch with the organization’s partners in the Gaza Strip and it appears that Israel is specifically targeting the Hamas leadership, as opposed to the 2008 incursion that involved large-scale destruction of civilian residential areas.

“So far in this early stage we are not seeing the large-scale destruction (we saw in 2008). It remains to be seen if … it will escalate to much greater damage,” El-Yousef said Nov. 16. As many as 1,400 Palestinians died in the 2008 incursion.

He noted that Egypt is also under a different regime, and it is likely that the borders to Gaza will be more open and accessible to transmit goods and services and allow people to reach hospitals. After the election of the Hamas government in 2007, Israel blockaded the Gaza Strip, and Egyptian President Hosni Mubarak enforced the blockade during the 2008 attacks.

El-Yousef said civilians in Gaza rushed to bakeries to buy bread following the assassination of the Hamas leader, and many food stores have run out of supplies. People are under curfew and are very concerned about any possible ground operation escalating the violence.

“The next couple of days will be critical as to where this is heading,” he said. “Based on that, we need to assess the situation and decide how to respond.”

El-Yousef said he had been in Gaza three weeks earlier and “things were looking up.” CNEWA was hopeful that staffers would be able to look at sustainable issues where people could take over their lives and move out of the humanitarian needs, he said.

The situation will continue like this, he said, “unless both sides are willing to take difficult decisions.”

He said Israel was wrong to think that if it can get rid of a Hamas leader, the whole organization will collapse.

“There will be someone to replace him … and they will have to deal with someone much worse. With each possible new person, they are dealing with a more and more extreme leadership, and the likelihood of reaching a solution becomes more difficult,” he said. “The cycle gets worse and worse. This is going nowhere and just creating more hatred.”

He said he hopes that new leaders in the Middle East might play a positive role in calming things down so that a lasting solution can be found.

“What we have now is conflict management rather than resolution,” he said.

NEXT: The ‘green’ pope: Benedict’s calls to care for creation earn notice