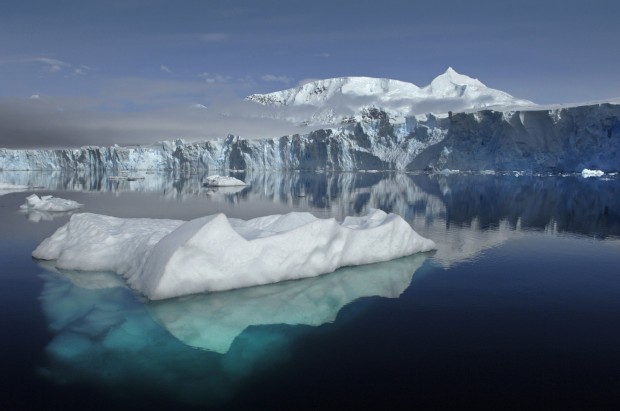 The Sheldon Glacier with Mount Barre in the background is seen from Ryder Bay near Rothera Research Station, Adelaide Island, Antarctica, in this undated handout photo. Climate change is causing the world's glaciers to melt at an unprecedented rate. Catholic leaders gathered at The Catholic University of America in Washington Nov. 8-10 discussed Pope Benedict XVI's teachings on the environment and climate change. (CNS photo/NASA handout via Reuters)

WASHINGTON (CNS) — Care for creation has been a hallmark of Pope Benedict XVI’s papacy.

From his 2009 encyclical “Caritas in Veritate” (“Charity in Truth”) to his leadership in guiding the Vatican to reduce its carbon footprint, Pope Benedict continues an 800-year Catholic tradition of holding up the environment as a gift from God that must be protected and sustained.

His writings on the environment are so extensive that some Catholics call him the “green” pope.

Taken collectively, Pope Benedict’s unwavering writings on the importance of protecting God’s creation and the need to address climate change offer a starting point for Catholics to respond to the ecological dangers facing the world.

In an effort to consider the fullness of those teachings, the U.S. Conference of Catholic Bishops, the Catholic Coalition on Climate Change and The Catholic University of America’s Institute for Policy Research and Catholic Studies hosted a symposium Nov. 8-10 in Washington to examine the U.S. Catholic response to environmental concerns might entail.

Dan Misleh, executive director of the Catholic Coalition on Climate Change, told Catholic News Service that the time was right for Catholics to share the rich tradition of Catholic teaching on the environment in an effort to shape how the world addresses climate change and other environmental concerns.

“If we don’t do it right, if we’re not faithful to who we are as Catholics, then we cede the issue to the environmental groups. The solutions (they offer) won’t be as attentive to the needs of people, particularly poor people,” he said.

Overall, about 60 people attended the event to hear a dozen presenters on a wide range of topics: the influence of works by St. Francis of Assisi, St. Bonaventure, St. Thomas Aquinas, Pope Paul VI and Blessed John Paul II on Pope Benedict’s writings; biblical images of creation; the prayers and ritual in the celebration of Mass that call to mind God’s creation; the American lifestyle and the nature of sin; and everyday habits people can adopt in an effort to take better care of the environment.

Some speakers called for the pope’s teachings to be explored in Sunday homilies, school curricula and parish Bible study and discussion groups. The environment, they said, is far too important to be ignored by church institutions.

Underlying the symposium was a special focus on the impact of climate change on poor people around the world and Pope Benedict’s distinctive concern for them. Presenters noted it is poor people who suffer most because of climate change and benefit least from industrialization and economic globalization, major contributors to environmental degradation.

“It means protecting people from hunger, drought, increases in tropical diseases, dislocation of climate refugees,” she said. “It is essential that the church’s powerful social justice tradition bring light to that.”

Christiana Z. Peppard, assistant professor of theology and science and ethics at Fordham University, raised ethical questions surrounding the evolution of water as a commodity to be bottled and sold as opposed to being a gift of the earth that is a necessity for life.

Citing a statement from the Pontifical Council for Justice and Peace, she identified fresh water as a right-to-life issue. “This is powerful language in an American context,” she told the symposium.

David Cloutier, associate professor of theology at Mount St. Mary’s University, on sabbatical as he writes a book on the morality of luxury, examined how Pope Benedict ties environmental concern to traditional Catholic moral values as expressed in the concern for hungry, poor and marginalized people.

“The bottom line is taking care for the environment is a serious commitment that is required of Catholics,” he told CNS.

The symposium also pointed to the long history of church teaching on creation’s goodness. Scott Hefelfinger, doctoral candidate at the University of Notre Dame, called for Catholics to tap that history on behalf of the common good, as expressed in the Second Vatican Council document “Gaudium et Spes,” the Pastoral Constitution on the Church in the Modern World.

The celebration of the Eucharist at Mass can inspire Catholic values on creation as well when worshippers understand the meanings of prayers and see the gifts of bread and wine as gifts of the earth, explained Msgr. Kevin W. Irwin, professor of liturgical studies at The Catholic University of America.

“If liturgy is what we pray and what we believe, then it ought to impact on how we live,” he said “We use the things of this world to worship God and worship of God is about a common celebration. Therefore, how does that celebration help us revere and share with the world?”

In the end, the conference offered no definitive solutions, but held out a wide range of actions and reflections for Catholics to consider in raising their awareness of the church’s respect for creation. Speaker Mary Ashley, doctoral student at the Graduate Theological Union in Oakland, Calif., said there are many ways for Catholics to “plunge in” on behalf of the environment.

“We image God when we love God’s creation,” she said.

Misleh said the symposium’s proceedings will be published some time in 2013, with the goal of making it available to parishes, schools and environmental groups interested in putting the pope’s teachings into action.

NEXT: Catholic workers, Missionaries of Charity praised by Muslim refugees in Indian camps