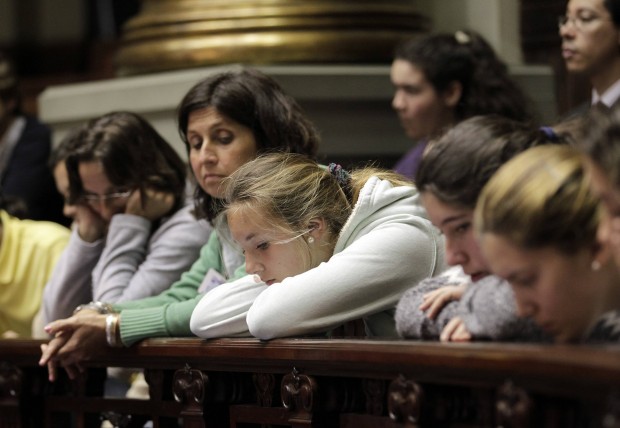 Women look on as Uruguayan senators in Montevideo debate a bill to legalize abortion in mid-October. Uruguay made abortion legal during the first trimester of pregnancy, a rare move in largely Catholic Latin America. (CNS photo/Reuters)

SAO PAULO (CNS) — Maria Lucia Tavares, 43, works as a maid in one of the most affluent neighborhoods in Sao Paulo, Brazil. The mother of three girls is four months pregnant and hoping for a boy this time.

“Although I don’t know how me and my husband will make ends meet with the extra mouth to feed, we never considered abortion,” she said. “It’s a sin and against God’s wishes.”

Tavares said she does not go to church as often as she should, but follows Catholic teachings. The housekeeper is among the 82 percent of Brazilians who are against abortion.

A recent survey conducted by the Brazilian Senate showed that, of the 82 percent, 78 percent would approve of abortion if the woman was raped and 74 percent said it would be acceptable if the pregnancy put the mother at risk.

Brazil has more Catholics than any other Latin American country.

According to the Catechism of the Catholic Church, abortion is “gravely contrary to the moral law” in all cases. Under canon law, any “formal cooperation” in abortion automatically incurs the penalty of excommunication.

The abortion issue has made the front pages of newspapers across Latin America in recent months, with controversial decisions being made in countries such as Uruguay and Argentina.

In October, Uruguay’s Congress passed a bill decriminalizing abortion during the first trimester of pregnancy. Seven days later, Uruguayan President Jose Mujica signed the bill into law, making the country the third in Latin America, behind only Cuba and Guyana, to legalize the procedure.

In Argentina, where according to the country’s Ministry of Health almost 500,000 illegal abortions are performed annually, Supreme Court judges ruled in March that women who were raped were legally allowed to get abortions. The court’s ruling, however, seems to have fallen on deaf ears, with many doctors and hospitals refusing to perform the procedure.

In late October, Argentina’s Supreme Court reiterated its decision, after a woman claiming to have been forced into prostitution and raped requested an abortion but was unable to find a hospital willing to perform the operation.

Although many believe that the decision by Uruguay’s Congress may strengthen pro-abortion voices, these groups are unlikely to gain much ground, said Capuchin Brother Carlos Rockenbach, former executive secretary of the Department of Mission and Spirituality at the Latin American bishops’ council, or CELAM.

“Although pro-choice groups … may make a little more noise now and feel strengthened by the ruling, in general, I don’t see the decision taken by the Uruguayan government as exerting a strong influence on the rest of the continent,” Brother Rockenbach said.

He said Uruguayan society “is very secular; convictions are not as intense.” Most other countries in the region are much more religious, and religion plays an important role in local politics, he said.

In early November, Uruguay’s largest newspaper reported that Mujica said he favored conducting a referendum on the abortion issue so that the people may decide.

“This is a matter of conscience that each must decide within himself,” Mujica was quoted as saying.

Nonetheless, in Brazil some Catholics are worried pro-abortion groups may use Uruguay’s decision to push forward their agenda.

Father Rafael Fornasier, assistant for the Brazilian bishops’ life and family commission, said Uruguay’s law came after the creation of a program to reduce the dangers of illegal abortions. A similar program, says the priest, is being discussed in Brazil by a multidisciplinary group supported by the Ministry of Health.

“We are concerned that a discussion of a similar program in Brazil will be used to push forth other measures which are pro-abortion,” he said, adding that, if that occurred, Brazilians would be apt to resist abortion strongly.

The World Health Organization reports that Latin America has one of the highest abortion rates in the world, 32 per 1,000 women, despite having the greatest number of countries that ban abortion under any circumstance. The WHO estimates that more than 4.4 million abortions took place in Latin America in 2008, 95 percent of which were unsafe.

Programs for the reduction of dangers from illegal abortions have been implemented in countries such as Argentina, Peru, Bolivia and Venezuela with the objective of reducing deaths caused by clandestine procedures. Although in these countries abortion is still illegal, exceptions to the rule have been made, and some abortion opponents say this may be the first step to decriminalizing abortion.

As discussions about this continue in Brazil, activists such as Jaime Ferreira Lopes, national vice president of the National Movement of Citizens for Life — better known as Brazil Without Abortion — are taking to the streets to raise awareness.

“The approval of abortion in our neighboring country only makes us fight harder in defense of human life,” Lopes said.

He said anti-abortion movements in Uruguay promise a long and hard battle in the country’s highest court and even an appeal to the Inter-American Commission for Human Rights. He said Brazilians would fight just as hard if a similar measure is proposed in Brazil.

“Several surveys have shown that the Brazilian people will reject any and all bills which try to decriminalize abortion in our country,” said Lopes.