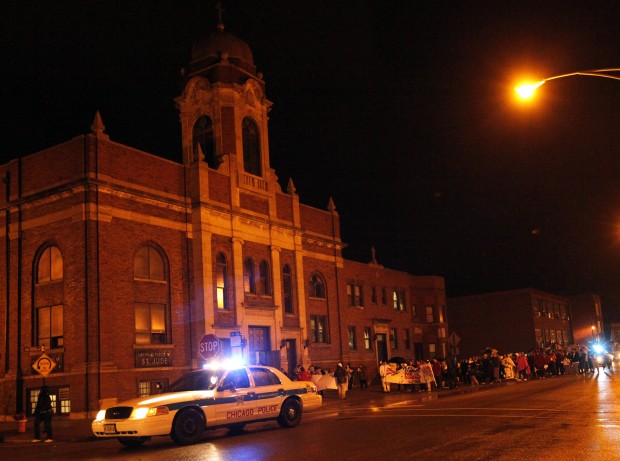 A police car leads members of various parishes from St. Mary Magdalene Church to Our Lady of Guadalupe Church in Chicago during a "Pilgrimage for Peace" in mid-October. The marchers stopped to pray at some of the places where youth and adults have been killed in gun and other violence over the last year. (CNS photo/Karen Callaway, Catholic New World) 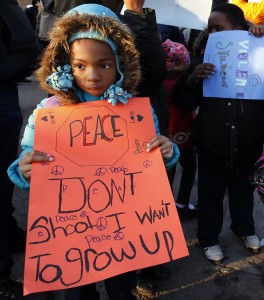 A student from the Chicago International Charter School, located on the campus of St. Anselm Parish, holds a sign as hundreds gather for a peace vigil and march Nov. 30 following the recent shootings of two men outside of St. Columbanus Church. (CNS photo/Karen Callaway/Catholic New World)

CHICAGO (CNS) — In a metropolitan area rocked by crime, Chicago-area Catholics are being challenged to respond and realize their spiritual responsibility to build peace.

More than 200 children and adults gathered on a street corner on Chicago’s South Side Nov. 30 to pray for peace on their streets.

Earlier that week, shots rang out at nearby St. Columbanus Church following the funeral of a reputed gang member. One man was killed and another injured in the shooting.

Catholic and other Christian pastors organized the prayer service, march and concert because the man whose funeral the mourners were attending was a member of their community and was himself slain.

Divine Word Father Abelardo Gabriel, administrator of St. Anselm Parish, said his church’s neighborhood has seen increased violence in the past months, with more shootings including drive-bys. St. Anselm is located across the street from where the march and service were held.

According to the Chicago Tribune on Nov. 30, shootings in the city of Chicago were up 11 percent over last year. Eleven more shootings occurred the evening of Dec. 3 and into the next morning. The city’s homicide rate also has increased over past year.

So far in 2012, homicides have risen to 480, a 21 percent increase from 398 a year earlier. If trends continue, the Chicago Tribune reported, Chicago will likely exceed 500 homicides for the first time since 2008.

The violence claims a direct impact on the social, spiritual, economic, intellectual and physical dimensions of communities big and small.

And Catholics, many local faith leaders contend, have a role — some would even argue a leading role — in combating the grim realities.

Earlier this year, Father Michael Pfleger, pastor at St. Sabina Parish, was named the archdiocesan representative for newly developing anti-violence initiatives. He has consistently urged Chicago-area Catholics to be “the lobbyists against violence.”

“Among all the great gifts Jesus gave us, he chose to give us the gift of peace,” Father Pfleger said. “Our responsibility is to share peace and lift it up.”

If Catholics disregard the responsibility and adopt apathy, the priest foresees a bleak future littered with unmet potential.

“Part of our Christian responsibility is to make sure that the children we bring into this world are protected so that they may reach their full destiny,” Father Pfleger said.

Amid a steady rain back in October, Father Carl Quebedeaux marched a group of more than 200 down the streets of Chicago’s Southeast Side.

Together, the group — predominantly a collection of parishioners from four South Side parishes — prayed for a more peaceful community, lit candles in memory of local residents who died as a result of violent acts, and reflected on the individual and collective roles they might play in constructing peace.

At one point, the traveling group stopped at an intersection dubbed “Death Corner.” There, Father Quebedeaux, pastor of Our Lady of Guadalupe Church, blessed the intersection and, borrowing a Native American tradition, offered prayers in all four directions.

The march then carried on, concluding with a Mass at Our Lady of Guadalupe where participants made a public pledge to create peaceful environments and protect the gift of life.

“It was an effort to join in prayer, to build community and to awaken the courage to resist violence in our communities and our homes,” Father Quebedeaux said.

“There’s a tendency to grow numb and say, ‘Violence isn’t my problem,’ but this is something we’re all involved in,” the priest said.

Students at the parish school at Holy Angels on the South Side have adopted anti-violence as their signature cause. Back in May, they joined more than 350 students from nine other South Side Catholic schools for an anti-violence rally.

“We want to keep kids aware of their role in this issue and help them understand that they play a part in bringing about change,” Holy Angels Deacon Leroy Gill told the Catholic New World, Chicago’s archdiocesan newspaper.

In the months since, Deacon Gill said the school’s older students have taken ownership of the issue and committed themselves to being positive, peacemaking role models for younger students.

Father Pfleger, meanwhile, continues pushing for solutions that will curb violence and promote tolerance and respect. He’s called for church-led workshops teaching conflict resolution, sponsored a petition calling for the banning of assault weapons and urged his fellow priests to preach about the need for Catholics everywhere to fill peacemaking roles.

“There’s an unraveling of society and we need to counteract this,” he said. “Peace has to be created — that’s our job as Catholics and Christians.”

With archdiocesan resources and more than 2 million Chicago-area Catholics, Deacon Gill said the local church is well positioned to take a stand on violence and spur change.

“I believe that if we take the lead, others will follow,” he said.