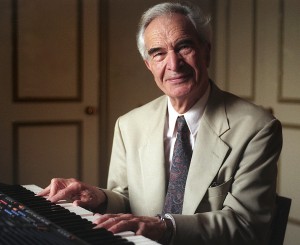 Jazz musician and composer Dave Brubeck is pictured in a 1996 photo. The Catholic musician died of heart failure Dec. 5 in Norwalk, Conn., after being stricken while on his way to a cardiology appointment. He would have turned 92 the following day. ( CNS photo/Bob Roller)

WASHINGTON (CNS) — Dave Brubeck, the influential and prolific pianist whose composition “Take Five” became a standard in the annals of jazz, died Dec. 5 at age 91, one day before his 92nd birthday.

He died of heart failure. He was reportedly on his way to visit a cardiologist in Norwalk, Conn., with his son Darius when he suffered a heart attack.

He became a Catholic in 1980 after completing a commission from Our Sunday Visitor — a Mass titled “To Hope.” Brubeck said in a PBS biographical profile, “I didn’t convert to Catholicism, because I wasn’t anything to convert from. I just joined the Catholic Church.”

He received the Laetare Medal from the University of Notre Dame and the Christophers’ Life Achievement Award, both in 2006, and the Grammy Lifetime Achievement Award in 1996. He got an honorary degree in sacred theology from the University of Fribourg in Switzerland in 2004. Brubeck also received the Kennedy Center Honors in 2009 for his contributions to American culture and the arts.

Over a half-century, Brubeck and his band gave concerts in foreign lands during goodwill tours. He was honored by the State Department in 2008 for his efforts.

He formed the Dave Brubeck Quartet in 1951 and kept the combo going, with different musicians, through 1967. It was during this period that he co-founded Fantasy Records, had his first huge hit with “Take Five” (credited to his saxophonist, Paul Desmond), and toured regularly despite recording up to four albums a year.

“When the quartet was on the road in the early days, we were being played so much that we just used to go on the car radio and turn the dial,” Brubeck told Catholic News Service in a 1996 interview. “One night we heard three of our songs being played on three different stations at the same time. That’s how much we were being played.”

Later versions of the group after it re-formed included his four sons and even his grandsons.

Brubeck originally turned down the commission for “To Hope” since he wasn’t a Catholic then, but Ed Murray, then the editor of Our Sunday Visitor, “just wouldn’t take no for an answer,” Brubeck said.

“When I’d say I didn’t know anything about the Mass, he’d say, ‘Exactly what I want, it’s a fresh view. Somebody who will come in and just look at this with fresh eyes.'” Brubeck said. He eventually told Murray, “I’ll do it if you have some very knowledgeable Catholic people — I’ll write three parts of the Mass — and if they like it, then I’ll continue.” After they listened to what he had written, the word came: “Tell Dave to continue and don’t change a note.”

As for “On This Rock,” which he composed for the 1987 visit of Blessed John Paul to San Francisco, he was also reluctant, Brubeck told CNS. “I wouldn’t accept that. They called me late in the evening and they needed an answer right away, the next day,” he recalled.

“So I said no, and then I asked for the text. And the text was ‘Upon this rock I will build my church and the jaws of hell cannot prevail against it.’ So I’m thinking, ‘Now they want nine minutes on this one sentence. How am I going to do that?’

“I went to bed and in the middle of the night I thought the only way to do this is how Bach would have done it — with a chorale and fugue. We can use the words over and over. I was dreaming the subject of the fugue,” Brubeck continued.

“And when I woke up I said, ‘Jeez, I’ve got it. This is the way I can do it, is with a chorale and fugue.’ I think it’s the best thing I’ve ever written.”

Among Brubeck’s favorite jazzmen were Duke Ellington, Louis Armstrong and a fellow pianist-bandleader, Art Tatum. Brubeck was chagrined when, in 1954, he became only the second jazz musician after Armstrong to grace the cover of Time magazine, believing such an honor more rightly belonged to someone like Ellington.

In addition to dozens of albums of jazz compositions, he wrote several oratorios, including “Bending Towards the Light … A Jazz Nativity,” a live recording of the annual Christmas jazz pageant performed at Lincoln Center in New York.

Brubeck, a native of Concord, Calif., and a veteran of World War II, was active at his craft until his death. His last album release was a live recording, “The Last Time Out,” in 2011.

Besides his four sons, he is survived by his wife, Iola, herself a lyricist; a daughter, Catherine; and 10 grandchildren and four great-grandchildren. Another son died a few years ago.

NEXT: Amid ongoing violence, Chicago-area Catholics challenged to build peace