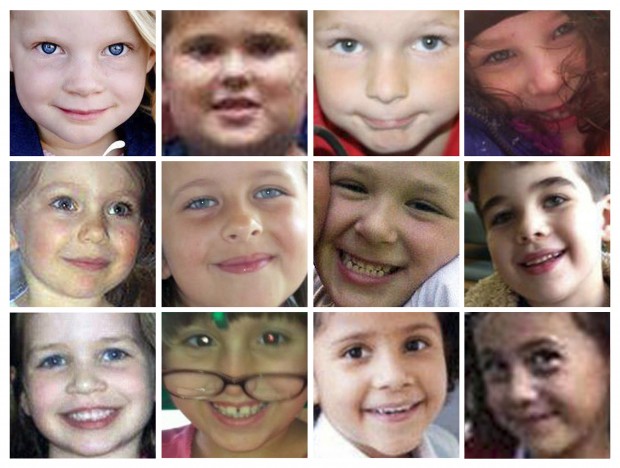 When the enormity of the tragedy began to unfold, other priests, chaplains and Catholic Charities personnel “were on the ground,” Brian Wallace, director of communications for the Bridgeport Diocese, told Catholic News Service.

In the days since St. Rose of Lima has taken center stage as people gathered for a prayer vigil the night of the shootings and flocked to Sunday Masses seeking solace. They looked to Msgr. Weiss and his staff and other Catholic leaders for pastoral outreach in the aftermath of the violence, which left 20 children and seven adults dead.

Eighteen children died at the school and two others died after they had been rushed to the hospital. All of the children were first-graders. The adults included the principal and five teachers, as well as the gunman.

Police officials identified the shooter as Adam Lanza, 20, and said he killed himself as first responders arrived on the scene.

“There are no words,” Msgr. Weiss told a TV reporter Dec. 15 in an interview for NBC’s “Today” show after spending hours helping law enforcement officials inform parents that their child had died in the shooting. At least eight of the children belonged to the parish and will be buried from St. Rose.

Msgr. Weiss said many of the family members thanked him for his presence. “There was a lot of hugging, a lot of crying, a lot of praying, a lot of just being silent,” he said, adding that at the previous evening’s vigil, community members “came together to care and to support. … People really care here and hopefully we can just keep the community together and they can console each other.” 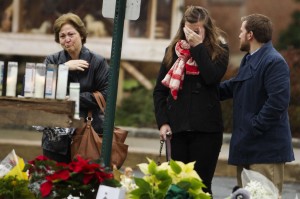 Mourners visit a memorial outside St. Rose of Lima Church in Newtown, Conn., Dec. 16. Twelve girls, eight boys and six adult women were killed in a shooting massacre Dec. 14 at Newtown’s Sandy Hook Elementary School. Eight of the children were to be buried from St. Rose of Lima. (CNS photo/Lucas Jackson, Reuters)

The priest, along with Lutheran, Episcopal, Jewish, Congregationalist, Methodist, Baha’i and Muslim leaders, participated in an evening interfaith service Dec. 16 at a Newtown auditorium.

President Barack Obama addressed the gathering after meeting separately with each family who lost someone in the shooting. He expressed his condolences and the nation’s support as they face their grief and bury their dead.

“I come to offer the love and prayers of a nation. I am very mindful that mere words cannot match the depths of your sorrow, nor can they heal your wounded hearts,” Obama said at the service.

“I can only hope it helps for you to know that you’re not alone in your grief; that our world too has been torn apart; that all across this land of ours, we have wept with you, we’ve pulled our children tight,” he continued.

“And you must know that whatever measure of comfort we can provide, we will provide; whatever portion of sadness that we can share with you to ease this heavy load, we will gladly bear it. Newtown — you are not alone.”

Obama pledged in the coming weeks to “use whatever power” his office holds “to engage my fellow citizens — from law enforcement to mental health professionals to parents and educators — in an effort aimed at preventing more tragedies like this.

“Because what choice do we have? We can’t accept events like this as routine,” he added.

Before closing his remarks, Obama named each child by name, and added: “God has called them all home. For those of us who remain, let us find the strength to carry on, and make our country worthy of their memory.”

In a Dec. 16 statement, Msgr. Jerald A. Doyle, administrator of the Bridgeport Diocese, said: “On this Gaudete Sunday we realize how quickly our joy can be turned to sorrow and how our faith can be challenged.

“On behalf of the clergy, religious and all the faithful of the Diocese of Bridgeport I extend my prayers and condolences to the families of the victims. … Our concern and support go out to the whole community of Newtown as you try to assist and support one another, especially those who were directly impacted.”

Msgr. Doyle pledged whatever diocesan resources are needed “to assist those affected by this tragedy,” including counselors from Catholic Charities. “As we continue our journey toward the Christmas feast, may our hope for the peace and comfort of the divine Savior, be a true source of assurance of his loving presence in our lives,” he added.

At all of the Sunday Masses at St. Rose, a letter was read from Baltimore Archbishop William E. Lori, Bridgeport’s bishop from 2001 until he was named to Baltimore in March.

“Along with you, and along with the rest of our nation and, indeed, the rest of the world, I was shocked and horrified to learn of what had taken place in Newtown so suddenly and terribly on Friday morning. I was in Rome for meetings, and it was early evening there when I heard,” the archbishop wrote.

“Since that moment, my heart has been heavy, and I can’t stop thinking about everyone in Newtown, especially the victims, the children, and their families,” he continued. “So I just wanted to say very sincerely and simply that I am close to all of you in my thoughts and prayers right now.”

He added: “Our lives will never be the same. But neither will we have to face a single day without the strength and peace that only Christ can give to us. In that strength and in that peace, I am very much united with you today.”

In a statement released late evening Dec. 14, New York Cardinal Timothy M. Dolan, president of the U.S. Conference of Catholic Bishops, said the shooting “wrenches the hearts of all people” and the “tragedy of innocent people dying through violence shatters the peace of all.”

“We pledge especially our prayerful support to the Diocese of Bridgeport and the community of Newtown as they cope with this almost unbearable sorrow … as they deal with the injuries they have sustained and with the deaths of their beautiful children,” he said.

“Once again we speak against the culture of violence infecting our country even as we prepare to welcome the Prince of Peace at Christmas,” the cardinal added. “All of us are called to work for peace in our homes, our streets and our world, now more than ever.”

The Bridgeport Diocese’s website included several other messages of condolences, including one sent on behalf of Pope Benedict XVI by Cardinal Tarcisio Bertone, Vatican secretary of state.

He conveyed the pope’s “heartfelt grief and the assurance of this closeness in prayer to the victims and their families, and to all affected by the shocking event.”

NEXT: ‘Sacramental sense’ of priest’s response after shooting called powerful