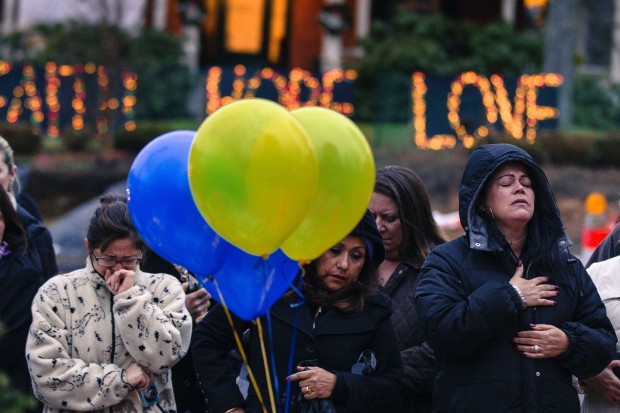 People mourn at a memorial to the victims of the Sandy Hook Elementary shooting in Newtown, Conn., Dec. 16. A gunman's rampage left 20 children and six adults dead after he forced his way into the school Dec. 14. (CNS photo/Lucas Jackson, Reuters)

VATICAN CITY (CNS) — After 20 children and six adults were shot dead in Connecticut, Pope Benedict XVI offered his condolences and prayers, urging all to dedicate themselves to acts of peace in the face of such “senseless violence.”

After reciting the Angelus Dec. 17, the pope, speaking in English, said he was “deeply saddened” by the Dec. 14 shooting at an elementary school in Newtown, Conn. In addition to the students and staff killed, the gunman took his own life.

“I assure the families of the victims, especially those who lost a child, of my closeness in prayer,” he said. “May the God of consolation touch their hearts and ease their pain.”

Just before blessing the Nativity-scene statues of the baby Jesus that Italian children brought to the square, Pope Benedict urged people to use the rest of Advent to dedicate themselves more “to prayer and to acts of peace.”

Cardinal Tarcisio Bertone, Vatican secretary of state, sent a message Dec. 14 to the Diocese of Bridgeport, which includes Newtown, saying the pope had asked the cardinal “to convey his heartfelt grief” and his prayers to the victims, their families and “all affected by the shocking event.”

“In the aftermath of this senseless tragedy, he asks God our father to console all those who mourn and to sustain the entire community with the spiritual strength which triumphs over violence by the power of forgiveness, hope and reconciling love,” the cardinal wrote.

In the United States, Cardinal Timothy Dolan, president of the United States Conference of Catholic Bishops, said the tragic shooting “wrenches the hearts of all people. The tragedy of innocent people dying through violence shatters the peace of all.

“At this time, we pledge especially our prayerful support to the Diocese of Bridgeport and the community of Newtown as they cope with this almost unbearable sorrow. We pray that the peace that passes understanding be with them as they deal with the injuries they have sustained and with the deaths of their beautiful children.

“Once again we speak against the culture of violence infecting our country even as we prepare to welcome the Prince of Peace at Christmas. All of us are called to work for peace in our homes, our streets and our world, now more than ever.

“In the shadow of this shooting, may we know that God’s sacrificial love sustains us and may those pained so deeply by this tragedy experience that care in their own hearts.”

A front-page article Dec. 15 in L’Osservatore Romano, the Vatican newspaper, said the people of the United States must look at ways to “stem the violence that strikes them from within, heinous violence that is increased by easy access to increasingly lethal weapons and this time struck children in an elementary school.”

“The Newtown massacre is destined to reopen the debate about the free circulation of guns,” it said. While many individuals and groups called for more stringent gun-control measures in the immediate aftermath of the shooting, “the National Rifle Association, on the other hand, entrenched itself behind an embarrassing silence,” the Vatican newspaper article said.

“In a pure coincidence, the massacre of the Connecticut children occurred on the eve of the anniversary of the Second Amendment to the U.S. Constitution, which guarantees the right to have weapons. It was ratified Dec. 15, 1791, and was made to measure for the United States as it was 221 years ago,” the article said. 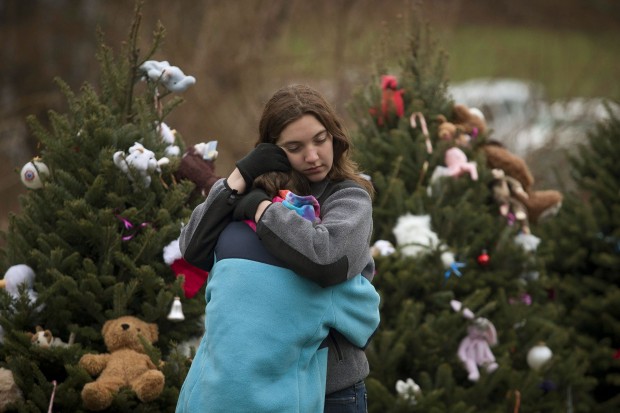 NEXT: ‘No words’ can describe shock, sadness after Conn. shooting, says priest