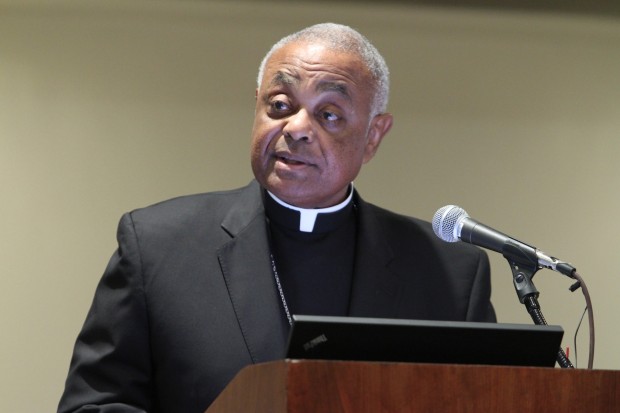 ATLANTA (CNS) — Some 200 national immigration leaders surveyed the landscape of immigration reform at the federal and state level during a three-day Catholic conference in Atlanta Dec. 3-5.

Archbishop Wilton D. Gregory of Atlanta told the leaders that while the federal government recently acted to offer young people brought into the country as children some relief by postponing deportation and granting them work permits if they qualify, the U.S. Catholic bishops will continue to advocate for comprehensive reform with more opportunities, particularly for families and those already living and working in the United States.

The bishops “will resist” any proposal that offers undocumented individuals legal status without a path to become citizens, he said in a Dec. 3 keynote address.

“We will argue against the creation of a permanent underclass in this country, where certain parts of our population do not have the rights that others do,” Archbishop Gregory said to applause.

The conference was organized by the U.S. Conference of Catholic Bishops and the Catholic Legal Immigration Network Inc., known as CLINIC. It was titled “Migration Policy and Advocacy in 2013 and Beyond: New Challenges and New Opportunities.”

In his keynote, Archbishop Gregory drew a connection to Atlanta’s native son, the Rev. Martin Luther King Jr., and the civil rights movement, saying that has shown the “disastrous results” when people are denied their full rights.

“Our nation has been down this road before, with disastrous results. As we know from our nation’s history, many persons, including Dr. King, have fought and died so that all persons can enjoy the full rights of citizenship. We cannot forsake this principle for the purpose of political expediency,” the archbishop said.

A second priority of the U.S. bishops, he said, is to ensure that “family reunification remains the cornerstone of our nation’s immigration policy.”

Many families with some members who are U.S. citizens are divided by the current policies and others applying for family reunification wait for years, he said. The system needs to ensure families remain together and the immigration process moves quicker, he said. And reform should not replace a family-based system with a system that “places value on a person’s resume over a person’s family ties.”

Recently, the U.S. House of Representatives passed a measure to increase visas for foreigners who earned advanced graduate degrees in the U.S. for science, technology, engineering and mathematics. It did away with the diversity visa system.

The archbishop said the bishops “accept and support reasonable enforcement measures” for the integrity of the nation’s borders and to protect the common good of citizens. However, “such measures must respect basic human rights and dignity” and include due process protections for immigrants and their families, he said.

Too often over the past 25 years, the government has “pursued an enforcement-only immigration policy,” he said. “We have witnessed the results of this policy in the inhumane detention conditions in which many immigrants are held in this country; the separation of parents from their children due to deportation; and the deaths of thousands of our brothers and sisters in the American desert,” he said.

He said a number of states, including Georgia, enacted laws that criminalized actions of “all citizens who, in the exercise of their religious teachings, want to assist those in need.”

Federal courts intervened to prevent enforcement of these laws, but “we must continue our vigilance and our advocacy against legislation which demeans human beings and interferes with religious freedom.”

The Catholic perspective on immigrants is rooted in the theological truth that all human beings are made in the image of God and retain that dignity, regardless of their circumstances.

In the Old Testament, God commanded his people to welcome the alien and stranger, and in the New Testament, Christians are told they encounter Jesus himself in the face of the stranger, Archbishop Gregory said.

“As bishops and as a church, we do not seek immigration reform based on some political calculus of how many votes can be garnered by one political party or the other,” he said. “We seek justice for all migrating peoples because they are our brothers and sisters and are made in God’s image.”

Conference workshops covered a variety of topics, from recent federal court rulings and the future of immigration reform to reaction from state leaders to the two-year reprieve from deportation with President Barack Obama’s federal Deferred Action for Childhood Arrivals program.

Conference attendees talked about glimmers of hope to rewrite immigration laws following the election, but also said vigilance was needed.

Pat Chivers, director of communications for the Atlanta Archdiocese, said she hopes immigration reform becomes one of priorities of the incoming Congress and the Obama administration.

Chivers said the political parties learned how “powerful the Hispanic community is in voting and contributing to the political process.” That awareness “has definitely brought immigration reform to the forefront of issues to be addressed this year,” she told The Georgia Bulletin, Atlanta’s archdiocesan newspaper.

Sister Marie Lucey, director of advocacy at the Franciscan Action Network in Washington, said she hoped the president “holds true to his word” to make immigration reform a priority.

“There is a lot of hope in the immigrant community that something is going to happen. We have to be very vigilant about what form immigration reform will take,” said Sister Lucey, who is a member of the Sisters of St. Francis of Philadelphia.

Paulette Croteau, from Tennessee, attended to learn more so she could share the issues with her parish. She’s the director of religious education at her small church, with a sizable majority of Hispanics.

“I see fear. I see hostility. My heart cries because my Hispanic brothers and sisters are getting a raw deal,” she said.

Nelson is a staff writer for The Georgia Bulletin, newspaper of the Archdiocese of Atlanta.