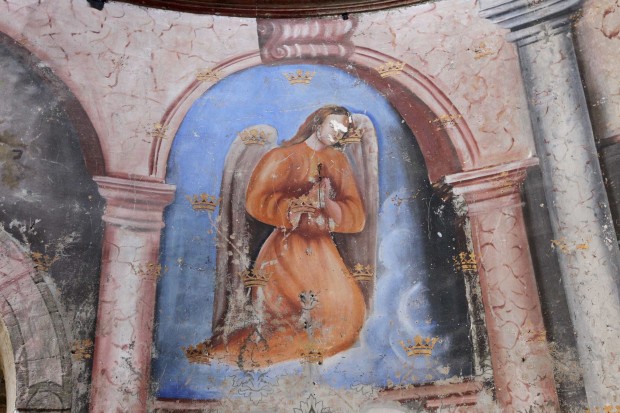 A defaced religious painting is seen with the eyes and mouth scratched out in the old city of Aleppo, Syria, Dec. 27. (CNS photo/Muzaffar Salman, Reuters)

VATICAN CITY (CNS) — Because of ongoing fighting in the city, Catholic leaders in Aleppo, Syria, canceled their traditional Christmas visits to local government officials, but the local governor dropped in on a meeting of bishops and priests Dec. 27 to offer his best wishes, said Bishop Giuseppe Nazzaro.

The bishop, who is the Latin-rite apostolic vicar of Aleppo, said Gov. Mohammad Vahid Akkad, an appointee of besieged President Bashar Assad, expressed his appreciation for Pope Benedict XVI’s Christmas appeals for peace in Syria.

After praying for peace in Syria in his midnight Mass homily, Pope Benedict expressed his concern Christmas Day for the “deeply wounded and divided” Syrian people. He called for “an end to the bloodshed, easier access for the relief of refugees and the displaced, and dialogue in the pursuit of a political solution to the conflict.”

Besides the absolute need for peace, the people of Aleppo need fuel. “It is very cold in Aleppo,” said Chaldean Catholic Bishop Antoine Audo.

Bishop Nazzaro, in an interview Dec. 28 with Fides, the news agency of the Congregation for the Evangelization of Peoples, said, “The leaders of nations must do everything to stop the conflict which is destroying the whole country.”

After six months of fighting in Aleppo and with no clear victor in sight, whether the government or the rebels prevail, he said, “they will find themselves facing a mountain of human and material rubble.”

Although fighting continues, especially for control of the airport, Bishop Nazzaro said most Christians were able to enjoy a bit of “holy Christian joy” at Christmas. Because of the fighting and danger posed by snipers, midnight Masses were celebrated in the late afternoon Dec. 24 and Christmas Day Masses were either at 10 or noon.

“The Latin (-rite) cathedral and parish were overflowing with faithful. The same occurred in the churches of the other rites. It was surprising considering that many people have fled the city or are displaced,” the bishop said.

“Everyone is coming to church seeking a word of comfort and consolation, which they don’t find anywhere else. You hear gun and mortar shots everywhere. We don’t know where they are coming from or where they are aimed; we only know that they bring death and destruction.”

He said that besides the absolute need for peace, the people of Aleppo need fuel. “It is very cold in Aleppo.”

“Especially for the hospitals, the schools and, of course, in the houses — it’s really a real problem, this problem of fuel. And we don’t have electricity and we have to use generators (which require) fuel and it’s very expensive,” the bishop said.

Bread is also scarce and expensive, Bishop Audo said. “All the people have become poor generally in Syria … now even the middle class is living like the poor in Aleppo.” 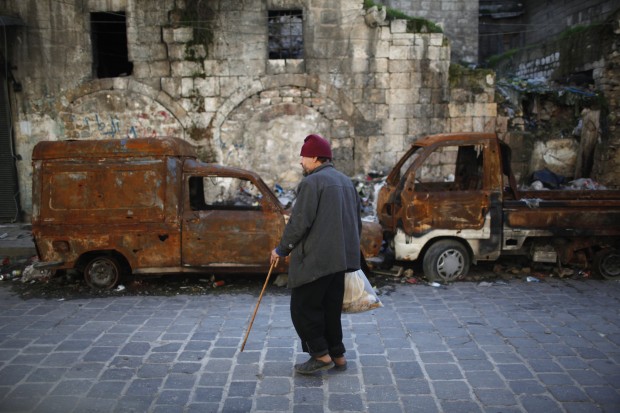 A blind man walks past cars and buildings damaged in fighting in the old city of Aleppo, Syria, Dec. 27. (CNS photo/Ahmed Jadallah, Reuters)