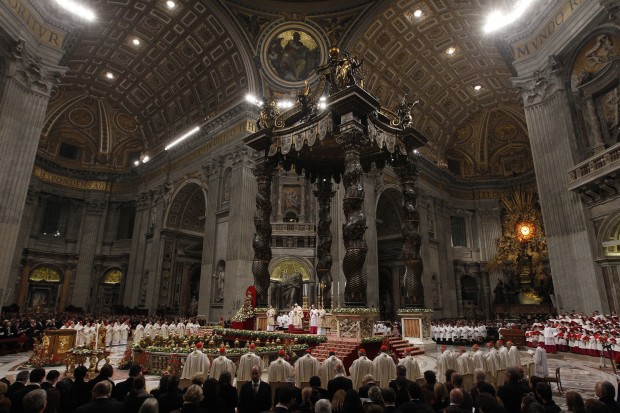 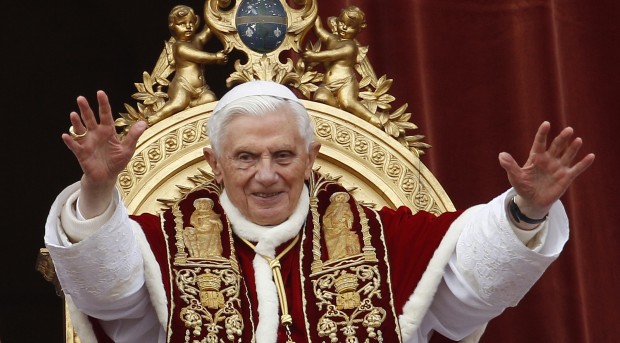 Pope Benedict XVI greets the crowd after delivering his Christmas message “urbi et orbi” (to the city and the world) from the central balcony of St. Peter’s Basilica at the Vatican Dec. 25. (CNS photo/Paul Haring)

VATICAN CITY (CNS) — Pope Benedict XVI urged people to think seriously about their faith at Christmas, and he urged them to recognize the connection between believing in God and helping others through acts of charity and by praying and working for peace.

The birth of Jesus is a source of hope for the world, “a hope in which we can trust, even at the most difficult times and in the most difficult situations,” the pope said Dec. 25 before giving his solemn blessing “urbi et orbi” (to the city of Rome and the world).

Standing on the central balcony of St. Peter’s Basilica, he wished people a merry Christmas in 65 languages. In English, he said, “May the birth of the Prince of Peace remind the world where its true happiness lies, and may your hearts be filled with hope and joy, for the Savior has been born for us.”

With the birth of Jesus, God “has done the impossible: he was made flesh,” the pope told tens of thousands of people gathered in St. Peter’s Square for the blessing.

“Yet this same God cannot enter my heart unless I open the door to him,” Pope Benedict said. God’s desire to be close to each person is a source of hope and truth that results in “kindness, justice and peace.”

Pope Benedict prayed for the people of Syria, “deeply wounded and divided” by conflict and violence. He appealed for an end to the fighting, for “easier access for the relief of refugees and the displaced” and for a dialogue that would bring a political solution to the crisis that began in March 2011.

During his Christmas Day address, he also repeated his prayers for peace throughout the Middle East, for peace in the Holy Land and for the people of Egypt as they continue to struggle to build a new democracy. He also prayed that China’s Communist Party leader Xi Jinping and the other new leaders of China’s government would respect the contribution that religions want to make to the country.

Support for Latin American migrants and an end to conflicts, ethnic and interreligious tensions in Mali, Nigeria, Congo and Kenya also were among the pope’s Christmas Day prayers.

As he began celebrating midnight Mass Dec. 24 in St. Peter’s Basilica, Pope Benedict looked tired, though he brightened up when laypeople brought up the gifts of bread and wine for the offertory.

He wore gold vestments, topped by a “fanone,” a round silver and gold vestment that he began wearing last October at a canonization Mass.

Msgr. Guido Marini, master of papal liturgical ceremonies, said the traditional papal vestment — last worn by Blessed John Paul II early in his pontificate — was seen as a symbol of the “shield of faith that protects the church.”

On separate gold thrones in front of the central altar of St. Peter’s Basilica were a statue of the baby Jesus and an illustrated Book of the Gospels open to the Christmas story. Ten children, representing every continent, laid flowers before the statue at the beginning of Mass, and then accompanied Pope Benedict to the basilica’s Nativity scene at the end of Mass to lay the baby in the manger.

In his homily, Pope Benedict said God made himself a baby so that people could overcome their fear of God and “dare to love him.”

The pope said he always is struck by the line in the Gospel Christmas story that there was no room in the inn for Mary and Joseph, so Jesus was born in the stable.

Christians should ask themselves, “What would happen if Mary and Joseph were to knock at my door?” he said.

In addition to raising “the great moral question of our attitude toward the homeless, toward refugees and migrants,” the question goes deeper and asks, “Do we really have room for God when he seeks to enter under our roof?”

People get so busy today and so full of themselves, he said, that “there is no room left for God.”

In addition, he said, more and more people are under the mistaken impression that faith leads only to strife because of instances when people claiming to be religious have done horrible things, supposedly in God’s name.

“It is true that religion can become corrupted and, hence, opposed to its deepest essence,” he said. “We must be on the lookout for these distortions of the sacred.”

At the same time, he said, people of faith must show the world that belief in God means belief in the dignity and sacredness of every human being created in his image, and honoring the divine image “in every person, in the weak, in the stranger, in the poor.”

Religion also has been a constant source of efforts to promote reconciliation and goodness, he said.

During his homily, Pope Benedict offered special prayers for peace in the Holy Land, Lebanon, Syria and Iraq. He prayed that “Christians in those lands where our faith was born may be able to continue living there” and that Christians and Muslims in the Middle East would cooperate in building peaceful societies.

Friars belonging to the Franciscan Custody of the Holy Land wrote the prayer intentions for the pope’s midnight Mass. A prayer recited in Aramaic, the language that Jesus spoke, asked that his light to shine on all nations, “so that peoples in the midst of war may discover the paths of understanding and that acts of violence will end in the Middle East and in the entire world.”

The day after Christmas, Pope Benedict recited the Angelus with visitors gathered under gray skies in St. Peter’s Square. Marking the feast of the first martyr just a day after celebrating Christ’s birth, the pope said, is an affirmation of faith that “believers called to give witness in difficult and dangerous situations are not abandoned and defenseless: the Spirit of God will speak in them.” 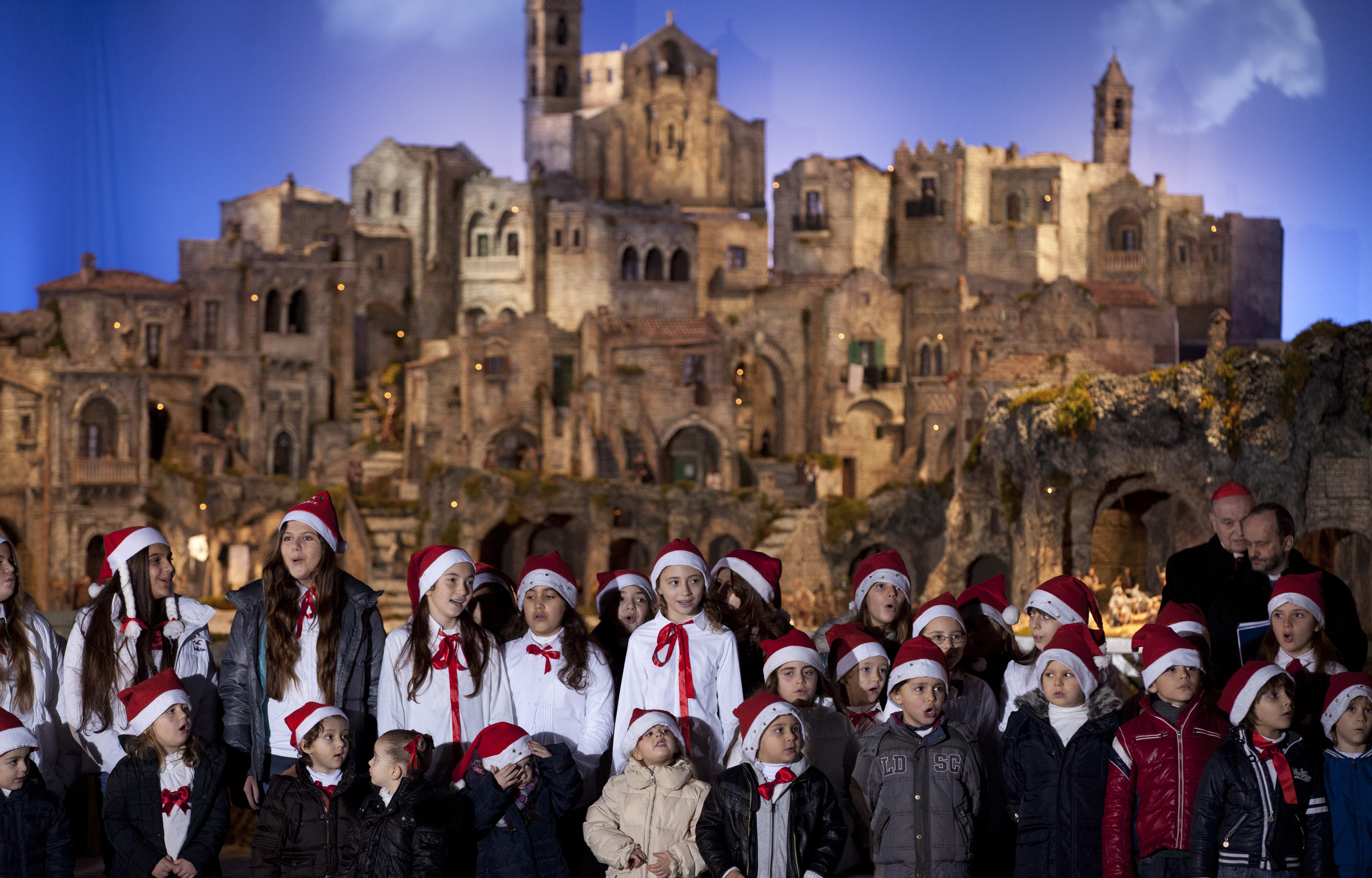 Children sing in front of the Nativity scene during its unveiling in St. Peter’s Square at the Vatican on Christmas Eve Dec. 24. (CNS photo/Paul Haring)