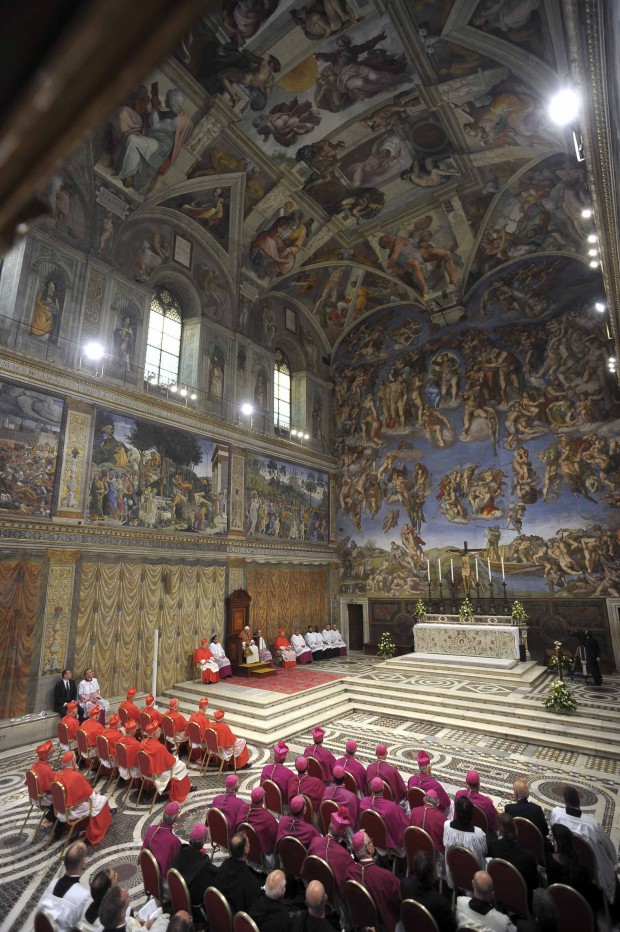 Michelangelo's depiction of the "Last Judgment" adorns the wall behind the altar of the Vatican's Sistine Chapel during a vespers service in late October. In an effort to protect Michelangelo's famed frescoes in the chapel, the Vatican Museums will be installing a new ventilation system to suck out the dust, dirt and humidity. (CNS photo/L'Osservatore Romano)

VATICAN CITY (CNS) — In an effort to protect Michelangelo’s famed frescoes in the Sistine Chapel, the Vatican Museums will be installing a new ventilation system to suck the dust, dirt and humidity from visitors.

With 5 million tourists pushing through the turnstiles each year, all that traffic is taking its toll as “dust, temperature, humidity and carbon dioxide are the great enemies of paintings,” said Antonio Paolucci, director of the Vatican Museums.

To lighten the heavy human footprint, the museums’ are installing a 110-yard-long carpet leading to the chapel’s entrance to clean off people’s shoes, he told the Italian newspaper, Corriere della Sera.

Suction vents will line the same path to vacuum hair, dust and other particulates off of visitors before they head into the chapel, and a new climate control system will lower temperatures “to remove heat and humidity from people’s bodies,” he said.

He has said reducing the impact by limiting the number of visitors was “unthinkable.”

The construction of the new dirt-and grime-prevention system has “made a lot of headway,” and Paolucci said he hoped it would be fully operational before the end of 2013.

The museums’ director also wants to sweep away visitors’ ignorance about the cultural, historical and theological significance of the Renaissance master’s frescoes by offering an instructional preview virtual tour beforehand.

Though it’s only in the brainstorm-stage, Paolucci said the idea would be to build a pavilion where visitors could sit, watch large close-ups of the ceiling’s images and listen to an explanation of the artwork.

“One who enters the Sistine Chapel, in reality, enters a huge theological-cultural (game of) charades where it is difficult to guess at first glance,” he said.

A virtual tour beforehand would help the 20,000 visitors a day “understand the frescoed scenes — to place them in time, history and the doctrine that gave them expression and meaning,” he said.

Paolucci lamented the lack of an educational experience in today’s museums because learning “evokes fatigue and study.”

“Ours is an era of fun, time off and amusement; museums have fallen for the mistaken idea that people can understand by being entertained.”

“But without engagement, without effort, it’s useless to tackle this forest of figures we call a museum. People leave exactly as they entered, without any cultural enrichment,” Paolucci said.