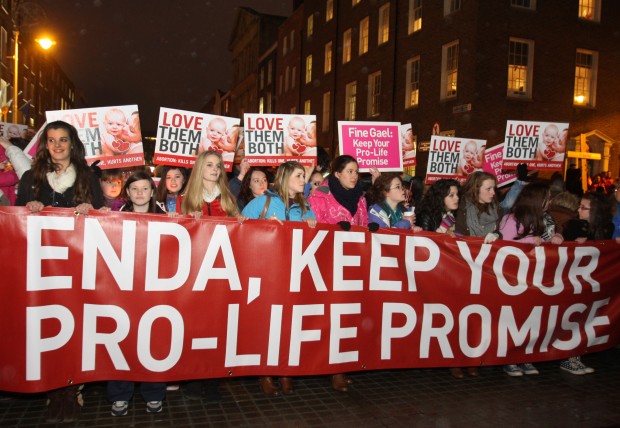 Pro-life demonstrators hold signs during a candlelight vigil outside the Irish parliament in Dublin Dec. 4, calling on the government not to introduce abortion legislation. Cardinal Sean Brady of Armagh, Northern Ireland, urged Catholics to make their views on abortion clear to politicians as the government considers legalizing abortion in limited circumstances. (CNS photo/John McElroy, The Irish Catholic)

DUBLIN (CNS) — The president of the Irish bishops’ conference urged Catholics to make their views on abortion clear to politicians as the government considers legalizing abortion in limited circumstances.

In his Christmas message, Cardinal Sean Brady of Armagh, Northern Ireland, reiterated the church’s opposition to such legislation.

“Public representatives will be asked to decide whether a caring and compassionate society is defined by providing the best possible care and protection to a woman struggling to cope with an unwanted pregnancy or by the deliberate destruction of another human life,” the cardinal said.

“There is no more important value than upholding the right to life in all circumstances,” he said.

While the government has pledged to introduce abortion legislation in 2013, Minister for Health James Reilly has insisted that his plans will take “full account of the equal right to life of the unborn child.”

In practice, abortion has been illegal in Ireland under legislation enacted in 1861. However, a 1992 Supreme Court judgment — known as the X case — found that there is a constitutional right to abortion where there is a substantial risk to the life of the mother, including the risk of suicide, up to birth.

Church leaders and pro-life campaigners are urging the government to hold a constitutional referendum to overturn the 1992 Supreme Court decision.

NEXT: Agenda for a year of faith: looking ahead for the church in 2013