Our Lady of Guadalupe’s devotion extends beyond the Americas 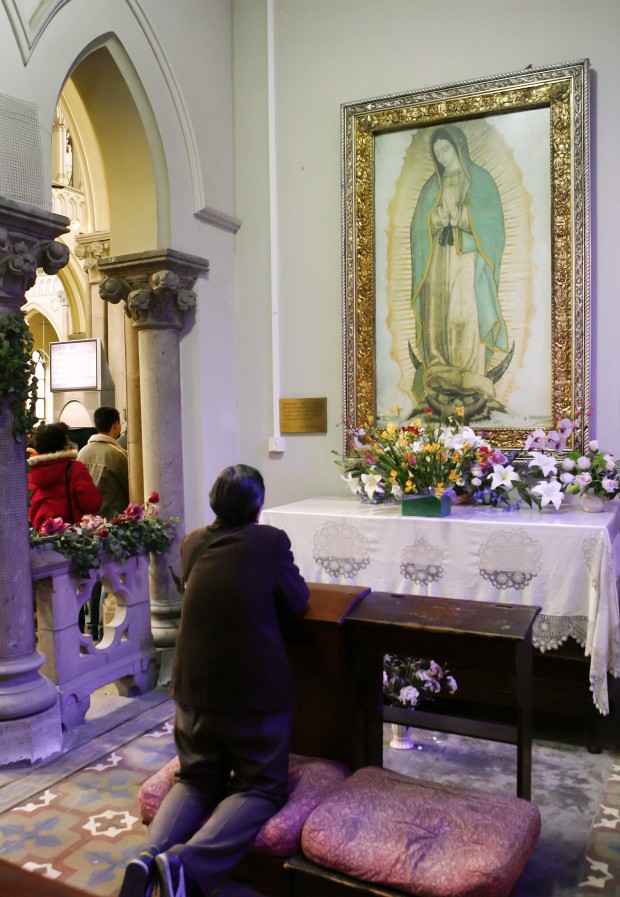 A Mass-goer prays in the Guadalupe chapel inside St. Ignatius Cathedral in Shanghai in this 2007 file photo. The image of Our Lady of Guadalupe -- most popular in Mexico and the Americas -- has been well-received by Catholics around the globe. (CNS photo/Nancy Wiechec)

“It was the least likely place we could have sent images,” Valero said, recalling the cool commercial relations between Mexico and China at the time.

But the images were well received by Chinese Catholics and were placed in the cathedrals of Beijing and Shanghai.

“The Chinese population liked them and began going there to pray,” she said.

Our Lady of Guadalupe is intimately associated with Mexico and forms part of the Mexican identity — even for many non-Catholics, who call themselves, “Guadalupanos.”

Valero has sent images of Our Lady of Guadalupe around the world — as far away as Australia, she said. Her organization has chapters on four continents and in countries as disparate as Canada, Slovakia and the Philippines, where she sees growing interest.

“I’ve never seen it so strong,” she said of the international interest in Our Lady of Guadalupe. “I see a boom internationally.”

Valero participated in the 1949 gifting of an image Our Lady of Guadalupe to the Notre Dame Cathedral in Paris as a girl, her family having sailed to Europe on the Queen Mary with a Mexican group.

The childhood trip and the request from the Mexican diplomat in China — who acted of his own accord, not as an agent of a government with a history of uneasy relations with the Catholic Church — are examples of what Valero says are the way the devotion to Our Lady of Guadalupe has spread: by devotees taking her image and story abroad.

“It permits them to not break the link with their homeland, which they miss,” Valero said of Mexicans.

Their stories can be touching.

Antonio Pun Valdez was born in Sinaloa state to a Chinese father and Mexican mother, but they were expelled in the late 1920s during a wave of bigotry; they were only allowed to return in 1960. Pun, who would later open a restaurant in Guadalajara, Mexico, and start a personal mission to promote Our Lady of Guadalupe in Hong Kong and China, said his mother shared her devotion with her children, despite being far from her homeland.

“I learned about (Our Lady of Guadalupe) before I learned Spanish,” Pun told CNS in 2010.

Pun’s mission has been small in scope — as with most attempts at sharing Our Lady of Guadalupe, who has gained grass-roots acceptance in Mexico and Latin America.

Father Antonio Camacho Munoz, priest with the Missionaries of Guadalupe, said the devotion grew somewhat organically as local populations took a liking to a figure from their side of the world, not another brought in from Europe.

Our Lady of Guadalupe “is something unique to the identity of all Latin Americans, not just Mexicans,” said Father Camacho, who was a missionary in Japan for eight years.

Overseas, the devotion has grown, especially in places such as Korea, Hong Kong, the Philippines and Eastern Europe, Father Camacho said.

Father Marco Antonio Navarro, another priest with the Missionaries of Guadalupe, who also ministered in Japan, said acceptance sometimes comes from the way Our Lady of Guadalupe is presented and the story of her appearance in 1531.

“It’s Mary coming close to a people,” he said.

The Missionaries of Guadalupe were founded to preach the Gospel in non-Christian countries, not promote devotion to Our Lady of Guadalupe. Still, “Everywhere we go, we take an image of Guadalupe,” Father Navarro said. “This draws attention.”

Adding even more to the appeal and the devotion, Valero said, “She’s the mother of God.”