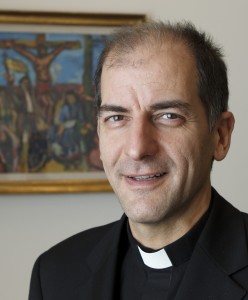 Msgr. Giovanni Pietro Dal Toso, secretary of the Pontifical Council Cor Unum, is pictured at the council’s office at the Vatican Dec. 5. Msgr. Dal Toso said new rules issued by Pope Benedict XVI for the governance of Catholic charities will not prevent such charities from accepting government funding, so long as the funding does not entail conditions that conflict with church teaching. (CNS photo/Paul Haring)

VATICAN CITY (CNS) — New rules issued by Pope Benedict XVI for the governance of Catholic charities will not prevent such charities from accepting government funding, so long as the funding does not entail conditions that conflict with church teaching, said the second-highest official of the Vatican office in charge of applying the new legislation.

Msgr. Giovanni Pietro Dal Toso, secretary of the Pontifical Council Cor Unum, spoke to Catholic News Service about the pope’s apostolic letter on the “service of charity,” issued “motu proprio” (on the pope’s “own initiative”) Nov. 11, and released by the Vatican Dec. 1.

The document, which has the status of canon law, emphasizes that Catholic charitable activity must not become “just another form of organized social assistance,” and directs bishops to ensure that charitable agencies under their authority conform to church teaching.

One section of the letter forbids Catholic charities to “receive financial support from groups or institutions that pursue ends contrary to the church’s teaching.”

Commenting on this, Msgr. Dal Toso said that the rule would not necessarily prevent such agencies from taking money from national or local governments that fund, promote or permit practices condemned by the church, such as abortion or contraception.

Nevertheless, he added, “if there is a program that goes against the church’s teaching, for example, programs promoting abortion, then we cannot accept funds for such a program or even accept funds with certain conditions that are contrary to the church’s doctrine.”

The secretary said that the new papal document instructs bishops to ensure that Catholic charities “exercise proper discernment in their relationship with financial entities,” such as private foundations, whose “institutional ends” — their primary goals or core mission as defined in their statutes — “do not conform to the church’s teaching.” In those cases, he said, “such financing is not acceptable.”

The document also states that staff members of Catholic charities must “share, or at least respect, the Catholic identity of their agencies,” and that they should exemplify “Christian life” and “witness to a formation of heart which testifies to a faith working through charity.”

That requirement, Msgr. Dal Toso said, does not mean that non-Catholics may not work for Catholic charities, but it means that such employees “should be aware of the fact that (they) are working in a Catholic organization.”

He said that the “theological and pastoral formation” that the motu proprio mandates for the staff of Catholic charities should ensure knowledge not only of relevant church teachings, but also of the distinctive approach and “anthropology” that the church brings to its charitable mission.

The pope’s apostolic letter is primarily concerned with laying out the responsibility of each bishop to oversee charitable agencies in his diocese, in order to reinforce such agencies’ Catholic identity, Msgr. Dal Toso said.

“Catholic charity is an ecclesial activity, not merely a social activity, and that means the role of the bishop is important,” he said, noting that Pope Benedict expressed this idea in his 2005 encyclical “Deus Caritas Est,” and finally gave it legal force in the motu proprio.

The responsibility for agencies that do not fall under the jurisdiction of a single bishop is determined by canon law cited in the papal document, he said. National bishops’ conferences oversee charitable agencies established under their authority, and the Vatican oversees international agencies established with its approval.

PREVIOUS: Our Lady of Guadalupe’s devotion extends beyond the Americas

NEXT: Salvation must be proclaimed, faith explained, papal preacher says