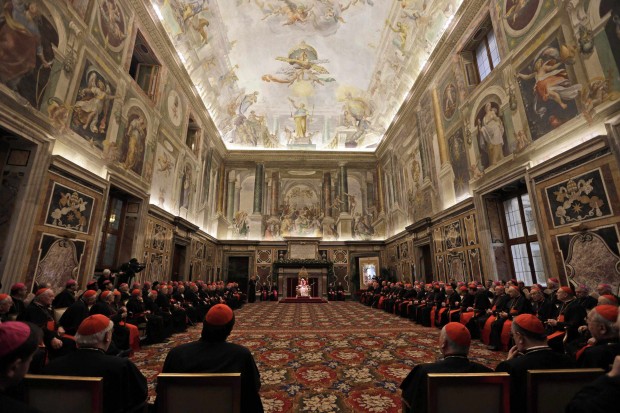 Pope Benedict XVI meets with members of the Roman Curia to exchange Christmas wishes Dec. 21 In Clementine Hall at the Vatican. (CNS photo/Reuters via pool)

VATICAN CITY (CNS) — Pope Benedict XVI said the family in Western society is undergoing a “crisis that threatens it to its foundations,” owing to false ideas of human nature that equate freedom with selfishness and present God-given sexual identities as a matter of individual choice to the profound detriment of humanity dignity.

But the pope said that the Catholic Church, in its dialogue with states, secular society and other religions, can help restore a proper understanding of human nature as a basis for justice and peace.

The pope made his remarks Dec. 21, in his annual Christmas address to officials of the Roman Curia, the Catholic Church’s central administrative offices at the Vatican.

“The question of the family is not just about a particular social construct, but about man himself — about what he is and what it takes to be authentically human,” Pope Benedict said.

“Only in self-giving does man find himself,” the pope said, “only by letting himself be changed through suffering does he discover the breadth of his humanity.”

As a consequence of an “increasingly widespread” refusal to make lifelong commitments to the family, the pope said, “man remains closed in on himself” and “essential elements of the experience of being human are lost.”

“The church represents the memory of what it means to be human in the face of a civilization of forgetfulness,” Pope Benedict said.

Citing a study of same-sex marriage and parenting by Rabbi Gilles Bernheim, the chief rabbi of France, Pope Benedict deplored what he called a “new philosophy of sexuality,” epitomized by the word “gender,” which teaches that “sex is no longer a given element of nature,” but a “social role we choose for ourselves.”

“Man and woman as created realities, as the nature of the human being, no longer exist,” he said. “Man calls his nature into question. From now on he is merely spirit and will.”

The consequences of this attitude, the pope suggested, have included unethical biomedical practices: “The manipulation of nature, which we deplore today where our environment is concerned, now becomes man’s fundamental choice where he himself is concerned.”

To reject the “pre-ordained duality of man and woman” is also to reject the family as a “reality established by creation,” he said, with particularly degrading consequences for children: “The child has become an object to which people have a right and which they have a right to obtain.”

Striking a more hopeful note, the pope said that the church can help secular society recover a true understanding of human nature.

“The church represents the memory of what it means to be human in the face of a civilization of forgetfulness,” he said.

Rather than prescribe specific remedies for social problems, the church proposes certain “fundamental and non-negotiable” values as convincingly as possible, the pope said, “and this then can stimulate political action.”

Dialogue with non-Christian religions, though it begins with a pragmatic search for peaceful coexistence, inevitably develops into an “ethical quest” for fundamental common values, hence a “quest for the right way to live as a human being.”

Properly understood as a search for the “oneness of the truth,” such dialogue does not entail compromise of religious convictions, he said.

A Christian “can venture freely into the open sea of the truth without having to fear for his Christian identity,” the pope said, since “Christ, who is the truth, has taken us by the hand.”

The pope’s speech included a brief summary of his activities in 2012, including his March trip to Mexico and Cuba.

While acknowledging increased freedom of worship under Cuba’s Communist regime, Pope Benedict warned that the “country’s search for a proper balancing of the relationship between obligations and freedom cannot succeed without reference to the basic criteria that mankind has discovered though encounter with the God of Jesus Christ.”

PREVIOUS: Pope Paul VI among 850 whose causes for sainthood advance