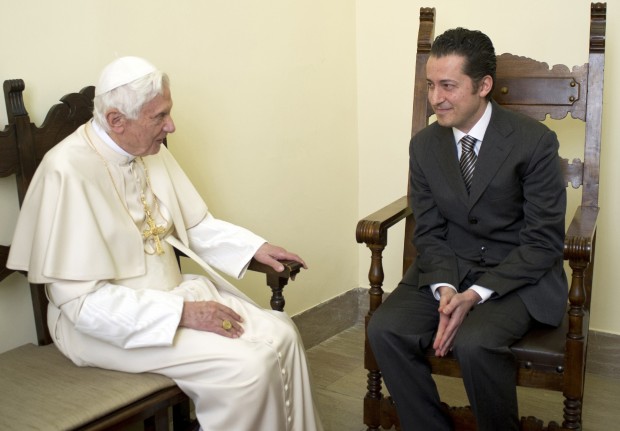 VATICAN CITY (CNS) — During a 15-minute meeting in the Vatican police barracks, Pope Benedict XVI visited with his former butler, Paolo Gabriele, and told him he was forgiven and was being pardoned.

Jesuit Father Federico Lombardi, Vatican spokesman, said the pope had wanted “to confirm his forgiveness and to inform him personally of his acceptance of Mr. Gabriele’s request for pardon.”

The Vatican described the pope’s visit Dec. 22 and the pardon as “a paternal gesture toward a person with whom the pope shared a relationship of daily familiarity for many years.”

Gabriele was allowed to return home the same day; he had been in a cell in the Vatican police barracks for almost two months after being found guilty of aggravated theft for stealing and leaking private Vatican documents and papal correspondence.

Gabriele, 46, who worked in the papal apartments from 2006 until his arrest in May, has been barred from further employment at the Vatican. He, his wife and three young children have been living in a Vatican apartment but will have to move now that he is no longer employed by the Vatican, Father Lombardi said.

“I’m too emotional to say anything else,” she said.

By stealing private correspondence to and from the pope and other sensitive documents, and by leaking them to an Italian journalist, Gabriele committed “a personal offense against the Holy Father,” the cardinal wrote.

His actions also “violated the right to privacy of many people; created prejudice against the Holy See and its different institutions; created an obstacle between the communications of the world’s bishops and the Holy See; and caused scandal to the community of the faithful,” he wrote.

Gabriele’s lawyer had told an Italian newspaper in July that Gabriele had written “a confidential letter to the pope,” asking for his forgiveness and telling the pope he had acted alone.

Gabriele had told investigators that he had acted out of concern for the pope, who he believed was not being fully informed about the corruption and careerism in the Vatican. He had repeated the claim at his trial.

NEXT: Pope names Boston priest to be Vatican’s abuse investigator