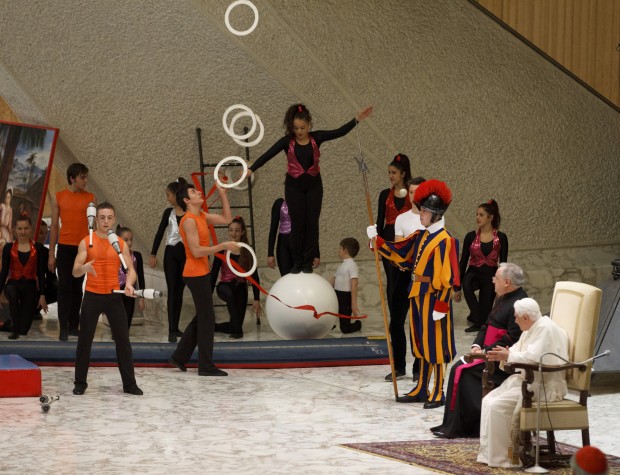 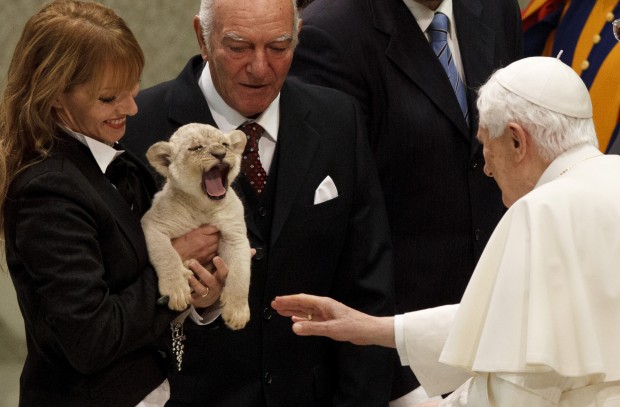 “You are called to give witness to the values that are part of your tradition: love for the family, tenderness toward children, attention to those with disabilities, care for the sick and the valuing of the aged with their wealth of experience,” the pope told an estimated 8,000 performers and carnival workers.

The Pontifical Council for Migrants and Travelers sponsored a “people of the traveling show” pilgrimage to the Vatican as part of its Year of Faith activities. The pilgrimage participants, who came from 15 countries, met the pope Dec. 1 after parading down the main boulevard leading to St. Peter’s Square and watching a short performance by jugglers, clowns and acrobats in the Vatican audience hall.

The pope personally greeted several of the performers and fluffed the furry coat of a lion cub. A clown gave him a Nativity scene set under a circus tent.

“The happiness of your performances, the joy of playfulness, the grace of your choreography (and) the rhythm of music are immediate means of communication for entering into dialogue with young and old, giving rise to feelings of serenity, joy and camaraderie,” the pope said.

Pope Benedict said the values and sacrifices that itinerant performers traditionally have embodied — including courage, generosity and a focus on the needs of the family — “are not always appreciated in modern society,” but they have molded generations of circus workers.

He urged the performers to hold tight to their values and to their faith, sharing their hope and encouragement with new generations of spectators and would-be performers.

He also urged Catholic parishes to reach out to the performers when the circus comes to town and asked governments to facilitate visas for circuses that travel across borders.

PREVIOUS: With @Pontifex, pope reaches out to new kind of followers