With @Pontifex, pope reaches out to new kind of followers 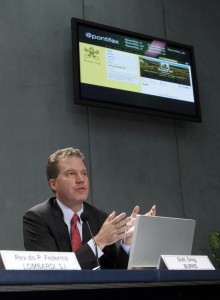 VATICAN CITY (CNS) — To celebrate the launch of his new Twitter account, Pope Benedict XVI will tweet the answers to a handful of questions from his followers.

The pope’s rare question-and-answer exchange on the social media site shows the church doesn’t just want to teach the truth, but also to listen to others, said Archbishop Claudio Celli, president of the Pontifical Council for Social Communications.

The archbishop and other Vatican officials spoke at a news conference Dec. 3 to reveal the pope’s new Twitter account @Pontifex.

Starting Dec. 12, the feast of Our Lady of Guadalupe, the pope will send messages in eight languages, including Arabic, from eight different Twitter accounts. @Pontifex is the English feed while the other language accounts use an extension of the main handle. For example, the Spanish feed is @Pontifex_es.

The handle “Pontifex” was chosen because it means “pope and bridge builder,” said Greg Burke, media adviser for the Vatican’s Secretariat of State. The name suggests “reaching out” and bringing unity not just of Catholics “but all men and women of good will,” he said.

Msgr. Paul Tighe, secretary of the communications council, said the pontifex name also “refers to the office more than the person,” that is, it highlights the leader of the church and the Catholic faithful.

A more practical consideration was that numerous permutations of the name Pope Benedict XVI were already taken by other people not affiliated with the pope, whereas the handle “Pontifex” was available.

Using a handle that wasn’t already taken meant the Vatican didn’t have to “go around and get people to vacate the space,” the monsignor said.

The pope’s first tweets from the new accounts will be responses to four or five questions about the Catholic faith sent to the pope on Twitter via the hashtag #askpontifex, he said.

The very first question came in during the news conference announcing the initiative. It was in Spanish and asked: “What is the core of the message of the Gospel and how can we help to share it?” he said.

While it’s expected people will send questions that are off-topic — like one asking who will win an upcoming sports match — only questions dealing with the Catholic faith will get serious consideration, said Burke.

The pope will personally send the inaugural tweets around noon Dec. 12 at the end of his general audience.

The Q&A exchange will be offered just that one time, and the rest of the papal news feeds will be excerpts from his general audience talks, Angelus addresses or other important speeches, Burke said.

Each tweet will be crafted by a Vatican official and the pope will review and approve each one before it is sent from the Vatican Secretariat of State’s offices, he said.

The papal tweets will be posted with some regularity but won’t be too frequent given the time constraints of the pope and that each tweet needs his approval, Msgr. Tighe said.

Even though he won’t be physically sending the tweets, the messages “are pearls of wisdom coming from the heart of the pope’s teaching and coming from his own mind and ideas,” he said. 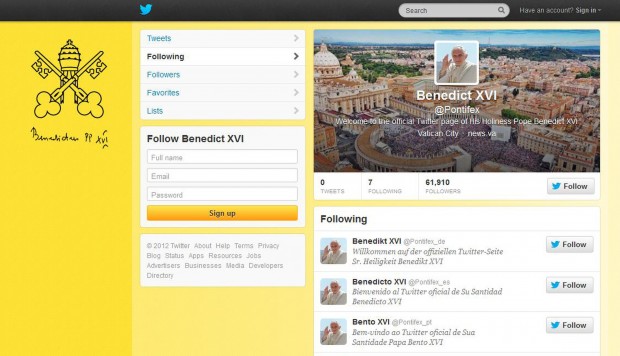 When asked whether the tweets will carry the weight of papal infallibility, Archbishop Celli said the tweets “aren’t positions taken on dogma,” however, they will be excerpts from his teachings and are a part of the papal magisterium.

To avoid making people feel left out or underappreciated for not being followed by the pope, the pope’s accounts won’t follow anyone else on Twitter, except the other @Pontifex language accounts, Burke said.

The pope’s presence isn’t to amass a fan club, but to encourage all the other Catholics who are present and active online, Msgr. Tighe said. Even though the pope won’t be using the site to retweet, follow others or comment, his presence is meant to “encourage them to engage in debate and discussion” with their fans and followers.

The Vatican isn’t afraid of the likelihood of insults or criticism being aimed at the pope on Twitter, both Burke and Msgr. Tighe said.

The monsignor added it would be worse to have kept the pope out of the Twittersphere out of fear of engagement and then to leave that space “vacant.”

Claire Diaz-Ortiz, manager of social innovation for Twitter, told Catholic News Service that before the account was made public, @Pontifex had 11 followers. Within an hour of its unveiling, it had more than 14,000 followers, she said, which was “a pretty great feat” considering the figure snowballed from the Tweets of the pontifical council, Vatican Radio and fewer than 100 reporters at the Vatican news conference.

Diaz-Ortiz said she works with “high profile” religious leaders and started helping the Vatican in the spring of 2012 expand its presence by opening a papal account.

“The thing we see with religion and what makes it so interesting,” she said, “is that their engagement levels are really through the roof.”

“What that tells us is that this is the kind of material that people on Twitter want to connect with and want to hear about more,” she said.

She said Christian leaders have repeatedly pointed out “how many Bible verses are really less than 140 characters” to begin with, and the “positive messages of spirituality” in the Gospels already make a nice fit for the Twitter format.

NEXT: Under the big top, traditional values thrive, are shared, pope says