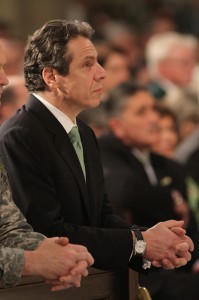 A New York measure that would prevent state regulations on abortion is a “radical” bill in a state where the abortion rate is already “double the national average,” New York Cardinal Timothy M. Dolan told Gov. Andrew Cuomo in a Jan. 9 letter. Cuomo, a Catholic, is pictured during a 2012 St. Patrick’s Day Mass at St. Patrick’s Cathedral in New York. (CNS photo/Gregory A. Shemitz)

The cardinal made the comments in a letter to the governor after Cuomo delivered his annual State of the State address, which opens the legislative session.

He congratulated the governor on his remarks, saying: “There is much to cheer in your report, and my brother bishops and I look forward to working with you to advance much of this agenda.”

He noted Cuomo’s references to recent gun violence in the nation and said the Catholic leaders share his “absolute horror” over such incidents, including the “unspeakable massacre” in Newtown, Conn., that claimed 26 innocent lives Dec. 14.

In his speech, Cuomo outlined an agenda for the coming session that includes reforming gun laws, improving the state’s health care system, bettering care for the mentally ill, working for safer schools and raising the minimum wage. He also backed a number of measures on women’s issues, including the proposed Reproductive Health Act to codify abortion in state law.

Cardinal Dolan told him that while there was much to praise in the address, “I would be remiss if I did not renew my great disappointment regarding your continued support for the radical Reproductive Health Act.”

New York Right to Life is among other opponents of the measure, first introduced in the Legislature two years ago.

In a statement on its website, the organization said the measure would write “fundamental reproductive rights” into New York state law and make changes “that represent the opinion of only a tiny subset of New Yorkers who hold extremist pro-abortion views.”

“The bill would provide full legal cover to the tragic and well-entrenched practice of abortion-on-demand through all nine months of pregnancy,” New York Right to Life said.

New York decriminalized abortion in 1970, before the Roe v. Wade decision made abortion legal virtually on demand across the country. Backers of the Reproductive Health Act say it is needed to update current state law that is “outdated and confusing” and to protect women’s “reproductive rights.”

In his letter, Cardinal Dolan reminded the governor that “millions of New Yorkers of all faiths, or none at all, share a deep respect for all human life from conception to natural death. I also know that you are aware that New York state’s abortion rate is, incredibly, double the national average.

“Sadly, nearly 4 in 10 pregnancies statewide end in abortion. In some parts of New York City, the rate is higher than 60 percent, mostly in the impoverished black and Latino communities,” he continued. “As we have discussed in the past, we obviously disagree on the question of the legality of abortion, but surely we are in equally strong agreement that the abortion rate in New York is tragically high.”

Cardinal Dolan pointed out that supporters of legal abortion have often “claimed they wanted to make abortion ‘safe, legal, and rare.’ Yet this measure is specifically designed to expand access to abortion, and therefore to increase the abortion rate. I am hard-pressed to think of a piece of legislation that is less needed or more harmful than this one.”

He urged Cuomo to reconsider his support for the Reproductive Health Act and said he is always available “to discuss this or any other matter with you at any time.”

“My brother bishops and I would very much like to work closely with you,” Cardinal Dolan said, “to reduce New York’s scandalous abortion rate and to provide an environment for all women and girls in which they are not made to feel as though their only alternative is to abort.”

He said abortion “goes against all human instinct” and “all too often leads to lifelong feelings of regret, guilt and pain for them, and for the baby’s father as well.”

NEXT: People around world pledge to say rosary daily during Year of Faith