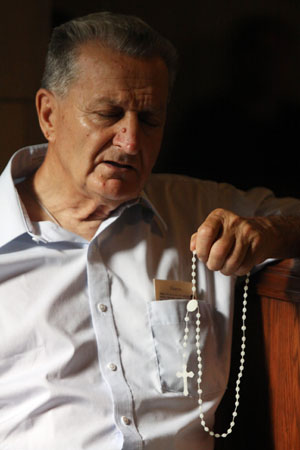 EASTON, Mass. (CNS) — The Family Rosary division of Holy Cross Family Ministries in Easton has gathered more than 80,000 pledges from people around the globe who said they would pray the rosary daily during the 2012-13 Year of Faith.

The pledges, which came in response to a program offering free rosaries, were gathered in a book and presented recently to Pope Benedict XVI by Holy Cross Father John Phalen, president of Holy Cross Family Ministries.

“There are even pledges in languages we can’t understand, like some of those from India and Bangladesh,” Father Phalen said in a statement. “It was an honor to present his Holiness with the book and ask his apostolic blessing on our ministry.”

The pope received the book at the Vatican in December as part of the Year of Faith observation and to mark the 70th anniversary of Family Rosary, founded by Holy Cross Father Patrick Peyton, known as the “rosary priest.” He died in 1992 and the cause for his canonization was opened in 2001.

Father Peyton started the campaign to provide free rosaries and gather pledges in 1991. Back then, the plan was to send 1 million rosaries to Russia. It has since evolved into a worldwide effort to send the prayer beads to families, schools, parishes and individuals on every continent.

To date, more than 20 million rosaries have been given away. About 5 million of those were provided by volunteer rosary-making groups in parishes.

Those promising to recite the rosary daily were asked to pray for peace and to post a pledge card in their homes as a reminder of their commitment, as Father Peyton used to ask people to do.

NEXT: Franciscan friars pray for intentions via texting