Musial recalled as a man who made ‘nobodies’ feel like ‘somebodies’ 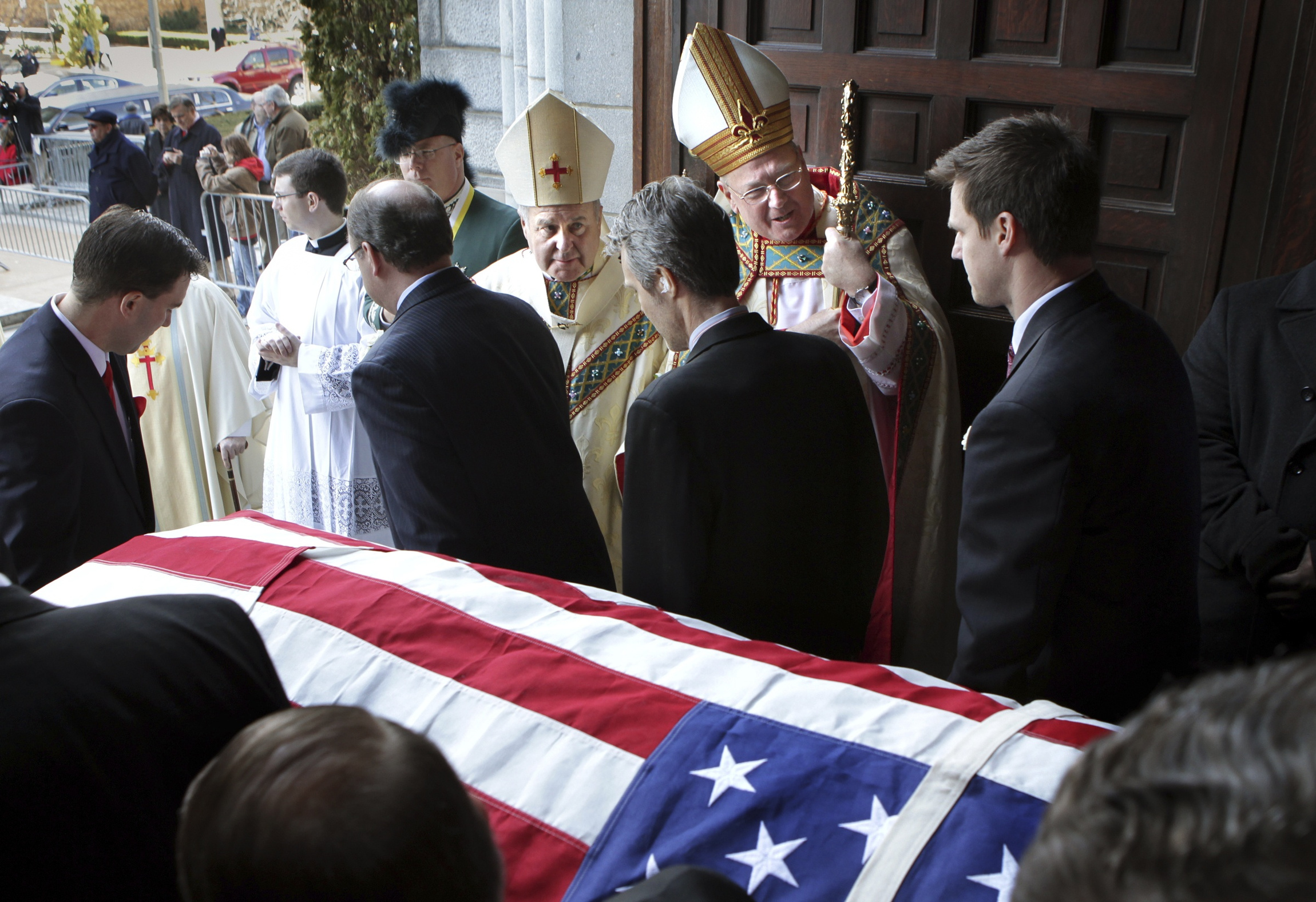 ST. LOUIS (CNS) — A funeral Mass Jan. 26 at the Cathedral Basilica of St. Louis for Stan Musial — “a true American hero” — brought comfort to those mourning the loss and a call for others to emulate his life of kindness to all.

“Your servant Stanley, who has fallen asleep in Christ,” may rejoice to rise again through him, St. Louis Archbishop Robert J. Carlson noted in the opening prayer.

Cardinal Timothy M. Dolan of New York, a native of St. Louis and former auxiliary bishop for the archdiocese, was a concelebrant of the Mass. Bishop Richard F. Stika of Knoxville, Tenn., who was pastor of Musial’s parish, Annunziata in Ladue, from 2005 to 2009, gave the homily.

Bishop Stika grew up in a south St. Louis parish, Epiphany — known for its enthusiasm for sports — and told of the “special connection that existed between ‘Stan the Man’ and the people of St. Louis and the rest of the country.”

Musial’s abilities stood out, but so did his humility and his relationship with his wife of nearly 72 years, Lillian, who died earlier this year, and his role as a father and grandfather, Bishop Stika said. A friend to thousands of people throughout the world, he was a “great man of faith” who came to the ballpark not after staying out late on Saturday nights but after going to church.

Bishop Stika told of how, in his later years, Musial would escort his wife, who used a wheelchair at the time, to the car after Mass, and fellow parishioners would help him load the chair in his trunk. They also knew that Musial kept souvenirs of his playing career in that trunk and would dole them out as gifts.

“I have three or four myself,” the bishop said with a chuckle.

He urged people, with that context, to look at their lives and faith and ascertain whether they too can respond to God’s challenge to make a difference in others’ lives.

Musial’s grandson, Andrew Edmonds, spoke during remarks of remembrance and said his family will remember his grandfather, who they called “Papo,” for the happiness and smiles he brought to others. “He was the same loving, caring patriarch that a lot of families share,” Edmonds said, noting that Musial brought breakfast from McDonalds to them every weekend for more than a decade.

Edmonds told of a man at the wake held in the cathedral basilica Jan. 24, with tears streaming down his face, who said that “your grandpa’s best attribute was that he made ‘nobodies’ feel like ‘somebodies.'”

Musial’s kindness to strangers day in and day out is part of his legacy that is most enduring, “and I challenge every one listening to follow Stan’s example,” Edmonds added.

Broadcaster Bob Costas, in a spell-binding speech, told of how Musial’s lifetime of “spirits lifted and acts of kindness large and small” by a “thoroughly decent human being” would fail to attract Hollywood producers but, combined with his accessibility, was why he was seen as a friend and neighbor by all in St. Louis.

His graciousness and buoyant personality is “the perfect embodiment of baseball,” he said. “It’s more important to be appreciated than glorified, respected than celebrated.”

Costas told of how Musial played a role in integrating baseball, not by being an activist but by simple gestures such as walking up to black players in the clubhouse before an all-star game, when white players wouldn’t approach them, and asking to be dealt into their card game.

“Henry Aaron said ‘I didn’t just like Stan Musial, I wanted to be like him,'” Costas said. Aaron was a star player for the Milwaukee and Atlanta Braves.

The broadcaster, who got to know Musial outside of his role in sports, talked about the possibility of a perfect person, and concluded that some, like Musial, “come closer to that unattainable idea than most.”

Musial’s son-in-law Martin Schwarze told of Stan the Man’s love of religion, his country, fans and family. “We never learned by his words. It was his actions,” something family members termed silent mentoring.

After the Mass, Cardinal Dolan said Musial “was proud of his Catholic faith,” which was “part of his DNA.” At Communion, Musial would show a deep concentration and an awe and reverence in his gaze, leading Cardinal Dolan to wonder what opposing pitchers may have felt when they saw a similar locked-in look when he was at bat.

Archbishop Carlson, also interviewed after the Mass, noted that the Musial family was “so generous” for allowing much access to the public during the wake and funeral. He said the comments by Musial’s grandson and son-in-law were inspiring and touching.

Others besides the invited guests attended as well. All were respectful before, during and after the Mass.

Bagpipes played as the hearse pulled up outside the cathedral basilica. Police offers lined up alongside it saluted.

An estimated 1,300 attended the funeral Mass, and 3,633 — just three more than the number of hits Musial had in his career — attended the visitation earlier at the cathedral basilica. 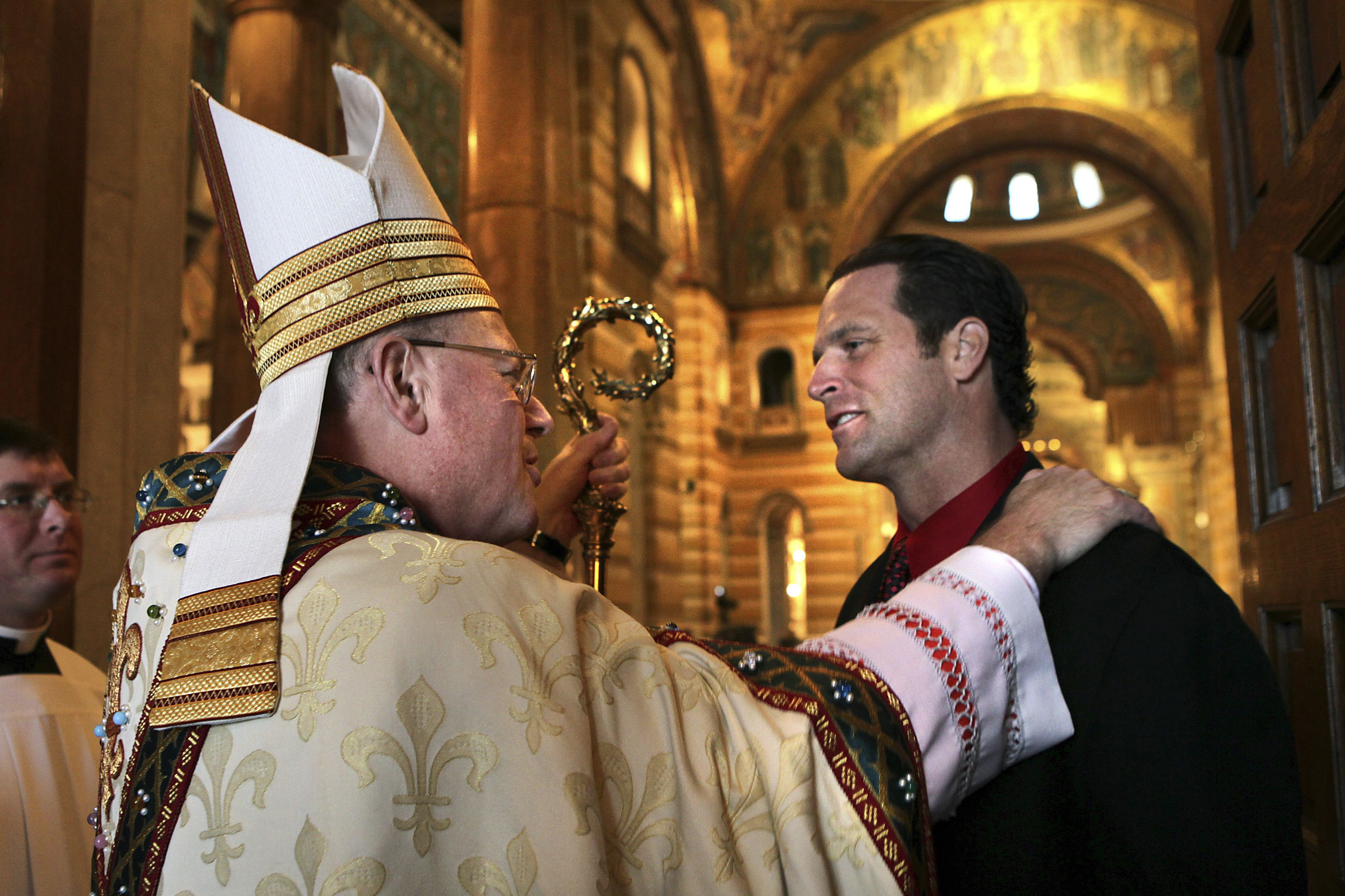 Cardinal Timothy M. Dolan of New York greets St. Louis Cardinals manager Mike Matheny following the funeral Mass for Stan Musial at the Cathedral Basilica of St. Louis. Musial, who died Jan. 19 at age 92, was the Hall of Fame outfielder-first baseman for the St. Louis Cardinals. Cardinal Dolan, a native of St. Louis and former auxiliary bishop there, was a big fan of Musial. (CNS photo/Robert Cohen, pool via Reuters)

NEXT: Harbaugh parents know one son’s team will win, another will lose in Super Bowl