Pro-lifer says activism has shown her ‘despair’ in abortion ‘mindset’ 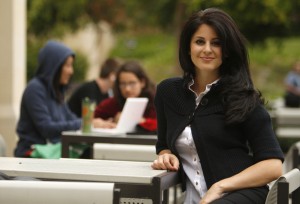 Pro-life activist Lila Rose, 24, is pictured in a 2009 photo in Los Angeles. She got an early start in the pro-life movement and at age 15 founded Live Action, a pro-life nonprofit specializing in investigative journalism. (CNS photo/Lucy Nicholson, Reuters)

ARLINGTON, Va. (CNS) — Pro-life activist Lila Rose was a just child when she first became aware of the tragedy of abortion.

Growing up in San Jose, Calif., the third of eight children, “we were taught from a young age to love and respect human life,” she told more than 150 pro-life advocates gathered at St. Charles Borromeo Church in Arlington for a mini-retreat.

Rose, a 24-year-old Catholic convert, officially became involved with the right-to-life movement at 15 when she founded Live Action, a pro-life nonprofit specializing in investigative journalism.

But at age 9, Rose, a prolific reader, stumbled upon a book on abortion.

She went to her mom and asked, “Is this real?”

Hearing the affirmative answer, Rose, stunned and uncomprehending, began reading everything she could find on the topic.

“I began to see and realize that even though I was safe, there were other children (who) were not safe,” she said in her talk Jan. 12. “As I learned more of these things, my heart began to seek out an answer to the question: ‘What can I do? … Isn’t there something to be done?'”

Rose prayed to the Lord for him to use her in whatever way he knew was best.

“It’s very dangerous to ever ask God to use you … because he will,” she said. “Give him an inch and he’ll take a mile. He’s a gentleman, so he’ll wait for you to pray and for you to offer yourself. But then he wants all of you.”

When Rose was a student at the University of California-Los Angeles, she began visiting Planned Parenthood clinics, posing as an underage, pregnant teen. In her first foray as an investigative journalist, Rose went into a California abortion clinic posing as a 15-year-old pregnant girl who had gotten impregnated by a 23-year-old male — what Rose called “a clear case of statutory rape in California.”

Instead of reporting it to the authorities, she said, the Planned Parenthood employee told Rose to lie about her age on the paperwork.

Later that day, Rose went to a second clinic in downtown Los Angeles where the manager told her that she knew what Rose was going through — that she had gotten pregnant at 17 and had the baby, a son who was then 16 years old. But, the manager said, if she could do it again, she would have had an abortion.

Whether the woman’s story was true, Rose said she didn’t know, but it gave “a peek into the culture of death and the hopelessness and the despair in that mindset.”

After graduating from college, Rose made the trip east to Arlington, where she continues to work for Live Action. Part of her ministry is giving talks, such as the one at St. Charles.

To combat the culture of death, Rose told the pro-lifers gathered in the church’s sanctuary to remember how much God loves each person and for them to remember always to trust in that love.

She encouraged receiving the sacraments frequently, especially the holy Eucharist, and praying in front of abortion clinics. And she recommended speaking the truth about abortion gently, lovingly and plainly.

“Every vocation is a call to build a culture of life, because at the heart of that call is loving Jesus and being part of his saving of souls — ours souls and the souls around us,” Rose said. “It’s so exciting and marvelous that we are invited every single day — if we just say ‘yes’ — to be part of God’s salvific plan for the whole world.”

Crowe is senior staff writer at the Arlington Catholic Herald, newspaper of the Diocese of Arlington, Va.