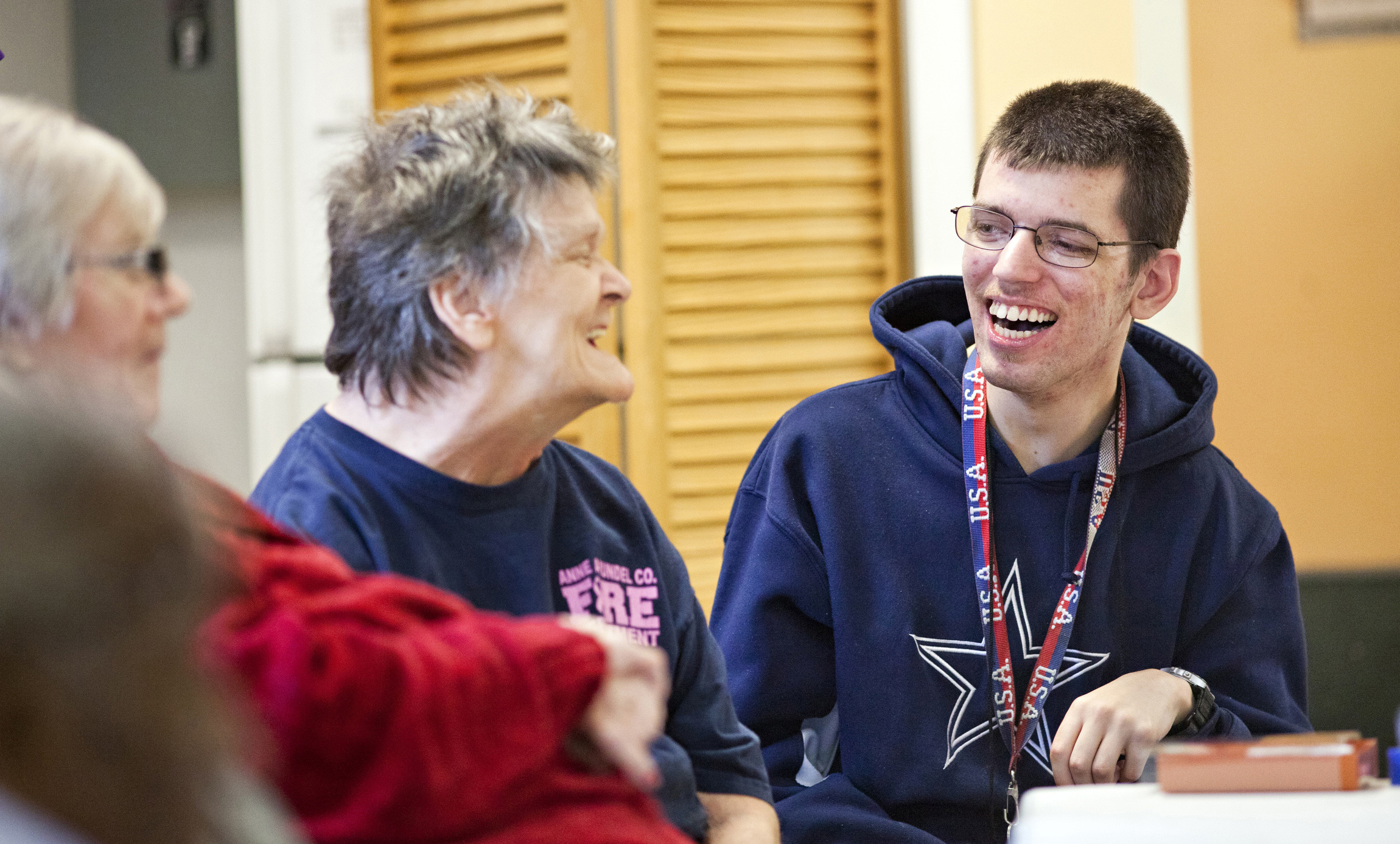 “Let me try it this time,” he said, taking the rolling pin. The pale dough was inexplicably clingy, but Lanham coaxed it into a surface suitable for the Christmas-themed cutters. “We’re going to let you do everything next time, Trev,” Starlene Nurse teased from across the room.

From the playful banter, it is clear Nurse and other staff members at Crofton Care and Rehabilitation Center know Lanham well. The 26-year-old, who is mentally disabled, volunteers at the nursing home three afternoons a week, often assisting the staff with entertainment and activities.

Sometimes, however, the parishioner of St. Joseph Church in Odenton takes on more solemn duties.

Lanham has the ability to pray for and be with the dying.

He keeps a prayer in his bedroom: “Dear Lord, I need your help. I have a friend who asked for prayers. A request was sent to me and I can only do my part, so I have to ask you to do the rest because you know what is best. I pray that you will help me say words of faith and love, and heal the blessed ones and take them in your care.”

He wrote the prayer and recites it for the sick and dying at his parish, where he is part of the 30-member sick and bereavement ministry.

Lanham said that for him, death is not scary like it is for some people. He was raised to pray and trust in God.

Joanna Mallon, who coordinates the ministry, emails Lanham to ask him to pray when someone is dying. Sometimes parishioners call her to ask specifically for Lanham’s prayers, which they believe are especially efficacious.

Mallon describes Lanham’s role as a gift and blessing.

“He prays people home to the Lord,” she said. “It’s just a gift for him that we realized he had. He takes it very seriously.”

When Lanham’s father, James, was dying of cancer in 2004, Trevor stayed by his side, helping him eat and drink. In caring for his father, Lanham realized he had a gift for helping the sick and dying. It compelled him to join St. Joseph’s bereavement ministry with his mother, Helen.

He said he often has premonitions that someone is near death or has died. He recalled one afternoon at the nursing home when he strongly felt he should visit a resident. He realized she was dying, and stayed with her until her family arrived.

Lanham said that for him, death is not scary like it is for some people. He was raised to pray and trust in God.

Lanham was adopted by the Lanham family when he was 2 years old, but he has been in their care since he was a 5-month-old infant.

After raising four biological sons, the Lanhams became foster parents in Prince George’s County. Over 20 years, they were family for 56 children, most with special needs. They adopted two — Trevor and Crystal, 23, who has severe physical and mental disabilities.

“They were all ‘special,'” Helen Lanham, 73, said of her foster kids. Even those without physical or mental disabilities had suffered abuse or other hardship.

Trevor was never expected to walk or talk, Helen said, but he proved his doctors wrong. With the help of his foster siblings, he took his first steps at age 5.

Eight years ago, the family moved from Boonsboro, where they had lived for 10 years, to a small house in Odenton, to be near Helen’s grandchildren and great-grandchildren.

Lanham graduated from Ruth Parker Eason School in Millersville, which serves students with moderate to severe disabilities. He volunteers there two days a week through Glen Burnie-based Providence Center, an organization for adults with disabilities that also coordinates his time at Crofton Care and Rehabilitation Center.

Many of Crofton Care’s residents treat him like a grandson, said Mary Wheat, its life enrichment coordinator.

Wherever Lanham goes, “people fall in love with him,” his mother said.

“I think it’s because of his attitude,” she said.

St. Joseph parishioner Joe Toher Jr., 59, said he appreciates what Lanham does. His mother, 93-year-old Eve, is a Crofton Care resident who enjoys Lanham’s presence. Lanham visited Toher’s father at Crofton Care, as well, before he died in July.

“He comes into my room and brings the paper,” said Lyons, a parishioner of St. Elizabeth Ann Seton Church in Crofton. “He leaves a little sunshine in my room.”

Wiering is a staff writer for the Catholic Review, newspaper of the Baltimore Archdiocese.