Everyone, even atheists, has human desire to know who God is, pope says 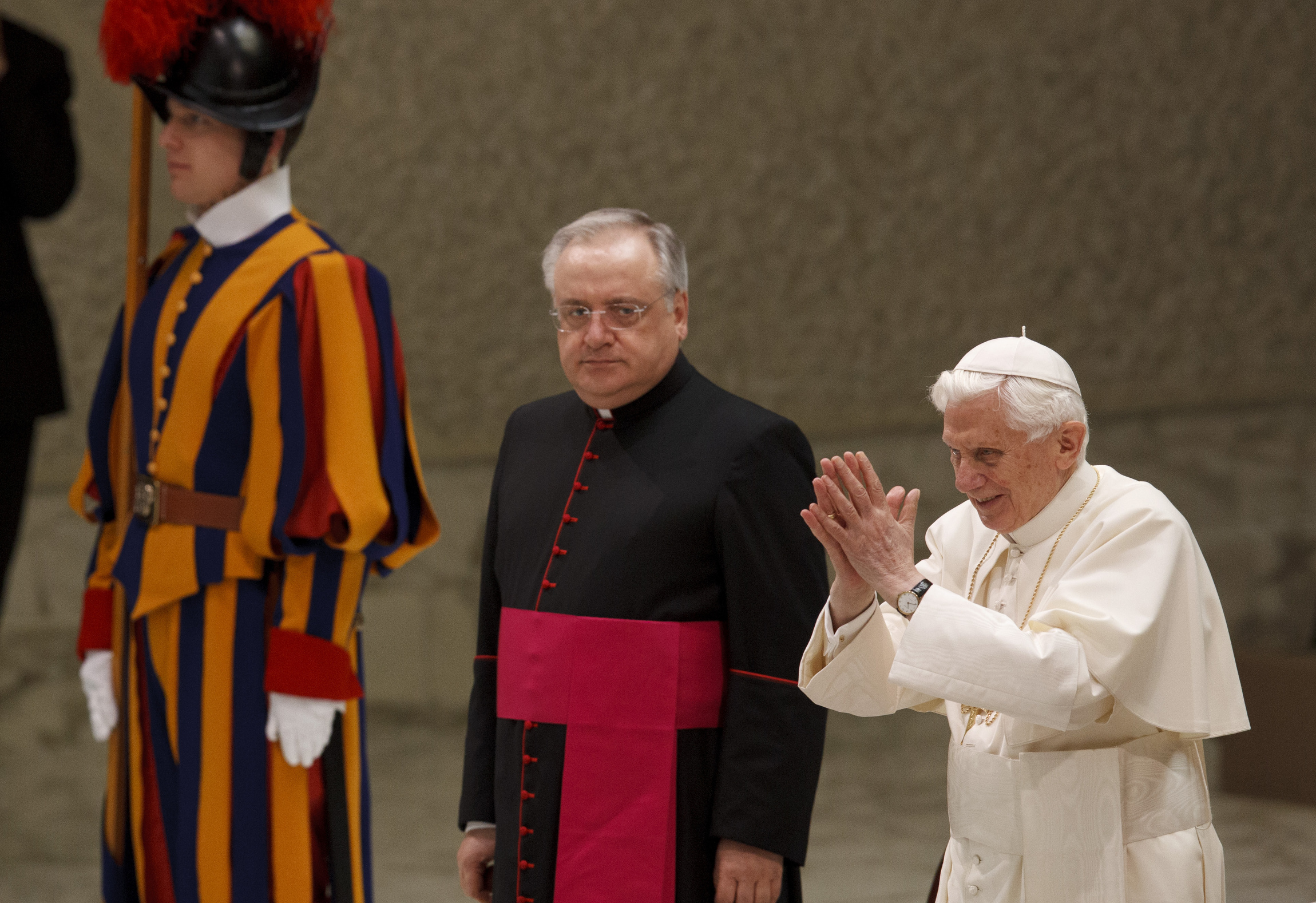 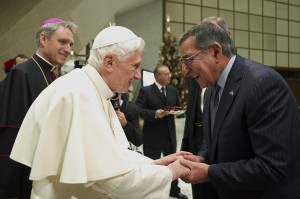 Pope Benedict XVI greets U.S. Defense Secretary Leon Panetta during his general audience at the Vatican Jan. 16. Panetta was on a six-day trip to Europe to to meet with European defense ministers to discuss the conflicts in Afghanistan and Mali. (CNS photo/L’Osservatore Romano via Reuters)

VATICAN CITY (CNS) — The desire to see and know God is innate in everyone, even nonbelievers, Pope Benedict XVI said.

But it’s especially important that people don’t just seek God when they need him but make room for him throughout their busy lives, he said during his weekly general audience in the Vatican’s Paul VI hall Jan. 16.

At the end of the audience, the pope also greeted U.S. Defense Secretary Leon Panetta, a Catholic.

The brief encounter came during the so-called “baciamano,” the moment when the pope offers a select group of prelates and special guests a brief handshake one-by-one rather than a private audience.

The pope spoke at length with the former CIA director, who was smiling and gently holding both of the pope’s hands, and gave him one of the medallions reserved for special guests.

Panetta said later that the pope told him, “Thank you for helping to protect the world.” Panetta said he replied, “Pray for me.”

Panetta, who was stepping down as Pentagon chief, was in Rome as part of a Europe-wide tour to meet with European defense ministers to discuss the conflicts in Afghanistan and Mali.

During his catechesis dedicated to the Year of Faith, the pope said, “The desire to really know God, that is, to see the face of God, exists in everyone, even atheists.”

It can even be an unconscious desire simply to know “who is he, what is he for us?” the pope said.

That yearning finds fulfillment in Christ, he said; as Jesus told his disciples, “Whoever has seen me has seen the Father.”

The pope said it was important to follow Christ “not just in those moments when we need him,” but to “find room for him in our daily tasks” and throughout one’s life.

“The splendor of the divine countenance is the source of life, it’s what lets one see reality” and its light is a sure guide in life, he said.

At the end of his catechesis, the pope made an appeal for people to join the observance of the Week of Prayer for Christian Unity Jan. 18-25. The theme for this year’s week is “What does God require of us?”

“I invite everyone to pray, ceaselessly asking God for the great gift of unity among the disciples of the Lord. May the inexhaustible power of the Holy Spirit encourage us in a sincere commitment to the search for unity, so that together we may all profess that Jesus is the Savior of the world,” he said. 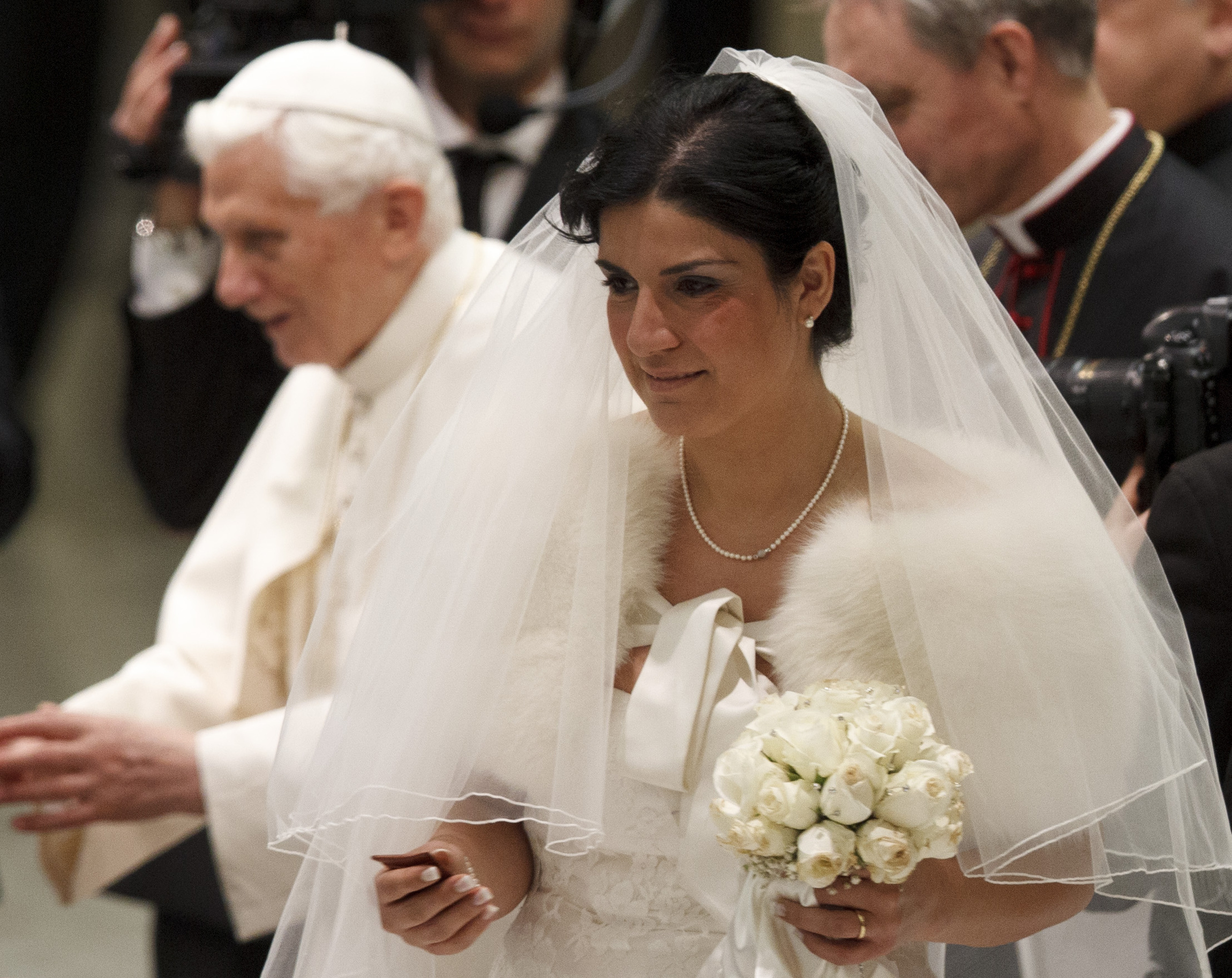 A recently married bride walks away after meeting Pope Benedict XVI during his general audience in Paul VI hall at the Vatican Jan. 16. (CNS photo/Paul Haring)