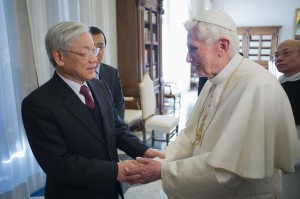 Pope Benedict XVI greets Nguyen Phu Trong, the general secretary of the Communist Party of Vietnam, during a private audience at the Vatican Jan. 22. Trong was accompanied by an 11-person delegation of other high-level party and government officials. (CNS photo/L’Osservatore Romano via Reuters)

VATICAN CITY (CNS) — Diplomatic relations between the Vatican and Vietnam were strengthened further when Pope Benedict XVI met Nguyen Phu Trong, marking the first time a pope had met with the general secretary of the nation’s Communist Party.

Trong, who has been general secretary of the party’s central committee party since 2011, was accompanied by an 11-person delegation of other high-level party and government officials. The Vatican was one of a number of stops the delegation had planned in Europe.

The pope and Trong met Jan. 22 and held closed-door talks for half an hour.

The party official was treated with all the pomp and circumstance of a typical head-of-state visit, Jesuit Father Federico Lombardi, Vatican spokesman, told journalists after the meeting.

The two also exchanged gifts; Trong presented the pope an engraved tray with mother of pearl inlay, and the pope gave him a picture of the Casina Pio IV villa in the Vatican Gardens.

The church and religious activity face strict controls in Vietnam, though some parts of the country have seen a gradual easing of restrictions on Catholic practices.

The two sides expressed hopes that “some pending situations could be resolved soon” and that the “current fruitful collaboration” may be strengthened, the Vatican said in a written statement.

The Holy See and Vietnam have launched a process aimed at full diplomatic relations; there is a non-resident papal representative to the country, and the two sides are engaged in ongoing talks.

The Vatican and Vietnam established a formal committee to discuss diplomatic relations after Prime Minister Nguyen Tan Dung met Pope Benedict in 2007. That meeting marked the first time a prime minister from Vietnam’s communist government met a pope and top officials from the Vatican Secretariat of State.

Another major step in the process was Pope Benedict’s meeting with Vietnamese President Nguyen Minh Triet in 2009.

Soon after that meeting, the two sides agreed to the appointment of a papal representative who — for the time being — would not be residing in Vietnam, but the move was still seen as a first step toward diplomatic relations. That representative, Archbishop Leopoldo Girelli, was named in January 2011.

For years, top Vatican diplomats made annual trips to Vietnam to work out details of the church’s life in the country and for decades church leaders, particularly from the United States and France, have visited at the invitation of Vietnamese bishops.

PREVIOUS: Everyone, even atheists, has human desire to know who God is, pope says

NEXT: After rally, Irish officials reconsider suicide threat as reason for abortion