‘Listen to the streets’ on marriage, says French bishops’ spokesman 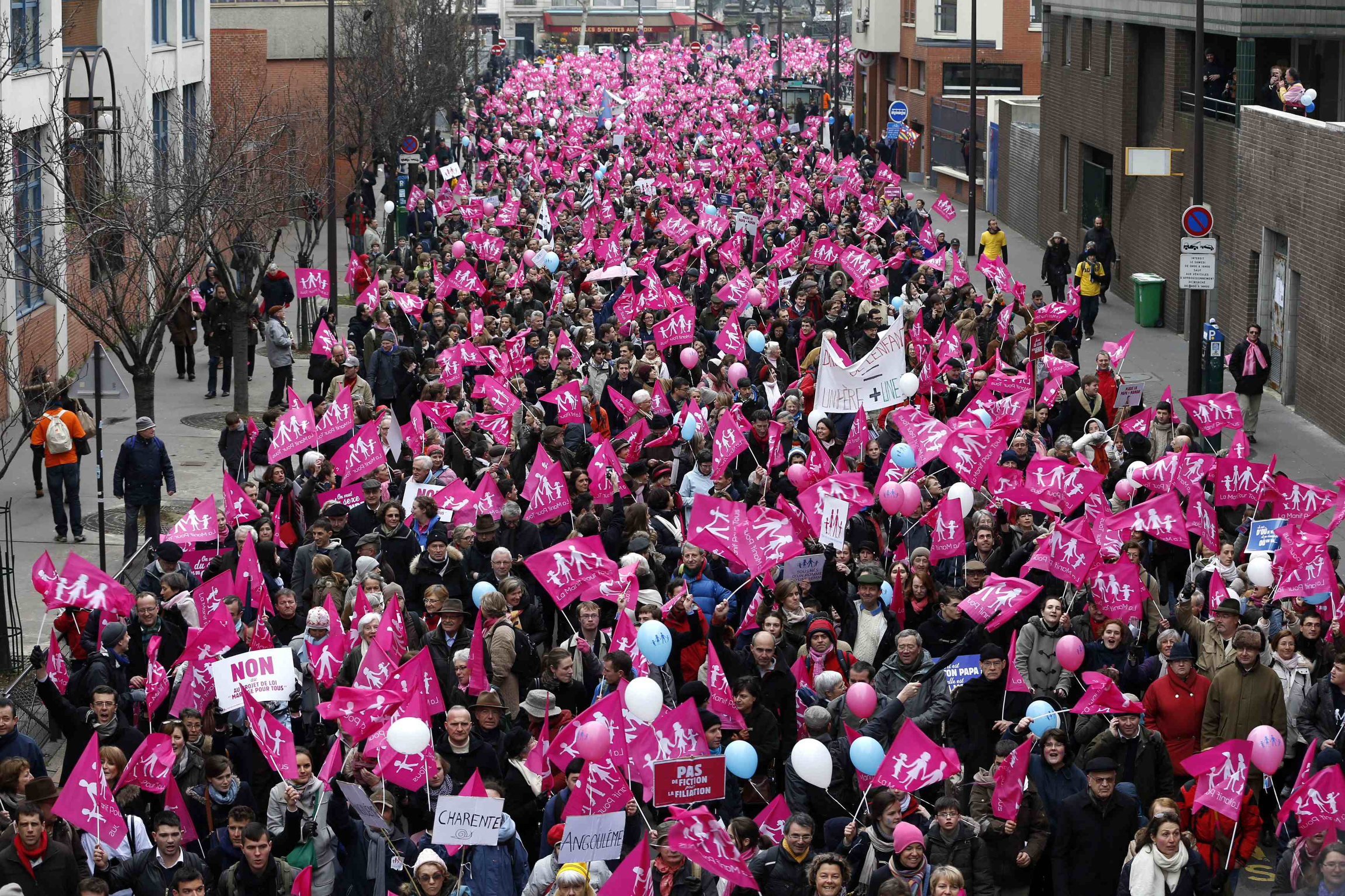 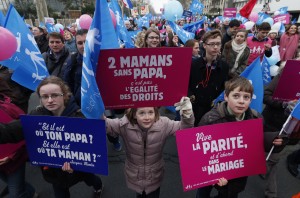 Young people carry signs during a Jan. 13 protest against France’s planned legalization of same-sex marriage. The signs read “Where is your daddy, where is your mummy,” “Two mothers without a father, that’s not equal rights,” and “Long live equality, firstly, in marriage.” (CNS photo/Benoit Tessier, Reuters)

PARIS (CNS) — A French bishops’ spokesman urged politicians to “listen to the streets” after hundreds of thousands of people rallied against same-sex marriage.

“We’re facing questions about society — what the family is, what marriage is, and whether there’s a difference between men and women,” Msgr. Bernard Podvin, spokesman for the French bishops’ conference, told France’s Metro daily.

The Jan. 13 demonstration was organized by a coalition of 30 family groups. Organizers said 800,000 people participated, although French police put the number at 340,000.

Msgr. Podvin said the Catholic Church believed homosexuals “must be respected,” but was against the same-sex bill, which was introduced in November by the government of President Francois Hollande under the slogan, “Marriage for All.” In addition to legalizing same-sex marriage, it would allow adoption by same-sex couples.

“In our eyes, there’s nothing contradictory between fighting firmly against homophobia and saying no to a radical transformation of the family model,” Msgr. Podvin said.

At the conclusion of the demonstration, protesters in Paris’ Champ de Mars called on Hollande to “hear and understand the people of France,” adding that the bill had “deeply divided” the population and provoked opposition “from right and left and the unaffiliated.”

They said the legislation “means inscribing in our law a fundamental discrimination: between those who will be born from a father and mother, and those who will be legally ‘born’ from two fathers or two mothers.”

In a brief address to protesters in Place Denfert-Rochereau, the bishops’ conference president, Paris Cardinal Andre Vingt-Trois, said he had not participated because his “mode of communication” with the government was “not the demonstration, but direct dialogue.”

However, he praised protesters for the “quality of their message” and for taking part “peacefully, without aggression, distrust or personal hatred.”

“It must be understood that the defense of parentage, paternity and maternity over children isn’t an act of aggression against homosexuals, but a recognition that a child born from a man and woman has a right to be raised by a man and woman,” he said.

Supporters of the proposed legislation plan a rally in Paris Jan. 27, two days before debate is scheduled to begin in France’s National Assembly.

About 500 people, mostly French citizens, also gathered in front of the French Embassy in Rome Jan. 13 as a show of support for the Paris protesters.

Along with pink, baby blue and white balloons, they also held signs, some of which said “Father + Mother = nothing better for a child.”

Organizers said they gave the embassy a letter addressed to the French president asking him to not promote the proposed laws. Similar protests were held by French citizens in London, Brussels, Madrid, Washington, D.C., Jerusalem, Moscow and Tokyo, organizers said.

Pope Benedict XVI did not mention the pro-family protests in his Angelus address Jan. 13. However, he did call for greater care and concern for immigrants and their families.

Noting the church’s celebration of World Day of Migrants and Refugees, the pope asked, in French, that newcomers be “accommodated and supported” in such a way they and their families may be assured a “dignified existence.”

A small demonstration by four women broke out in St. Peter’s Square just as the pope began his weekly address. Four young women removed their shirts to reveal slogans painted on their naked backs and chests, such as “In Gay We Trust,” and “Shut Up.”

The pope did not appear to notice the protesters, and they were quickly taken away by Italian police.

Archbishop Vincenzo Paglia, president of the Pontifical Council for the Family, told Vatican Radio the church supports cultural and social progress, but not “at the expense of nature.”

He said he wondered why so many people were so committed to protecting the environment from manipulation, but “not very concerned about manipulation against the inner workings of anthropology.”

Allowing same-sex couples to adopt “leads to the child becoming a kind of merchandise,” he said, adding that a child must be born and raised “the ordinary way, that is with a father and a mother.”

In England and Wales, more than a thousand Catholic priests signed an open letter warning British politicians that a bill to redefine marriage to include same-sex couples would erode religious liberty.

The letter, published Jan. 12 in the London-based Daily Telegraph newspaper, urged lawmakers “not to be afraid to reject this legislation” when it arrives in the House of Commons later in the month.

The signatories, who also include eight bishops, suggest that the Equal Marriage Bill represents the gravest threat to the Catholic Church in England and Wales since the Reformation. They said it could restrict the ability of the church to function effectively and force Catholics from a range of professions.

“Legislation for same-sex marriage, should it be enacted, will have many legal consequences, severely restricting the ability of Catholics to teach the truth about marriage in their schools, charitable institutions or places of worship,” said the letter, signed by about a fifth of the priests of England and Wales.

“It is meaningless to argue that Catholics and others may still teach their beliefs about marriage in schools and other arenas if they are also expected to uphold the opposite view at the same time,” it said.

“Marriage, and the home, children and family life it generates, is the foundation and basic building block of our society,” the letter said.

Editors: Contributing to this story were Jonathan Luxmoore and Simon Caldwell in England and Carol Glatz in Rome.