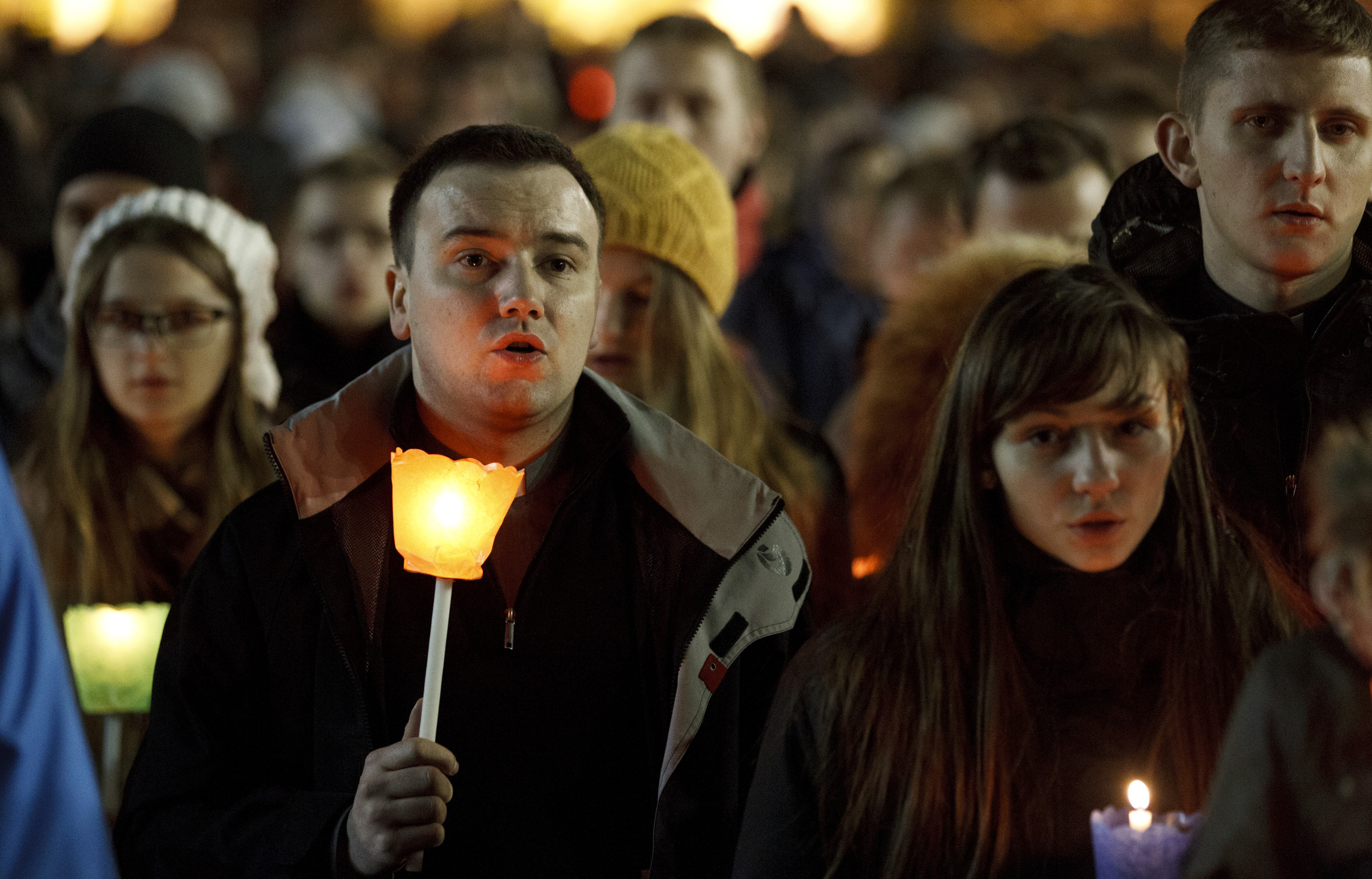 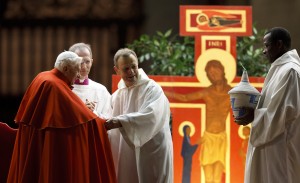 Pope Benedict XVI greets Brother Alois Leser, prior of the Taize ecumenical community in France, during a Taize prayer service with young people in St. Peter’s Square at the Vatican Dec. 29. At right a member of the community presents sorghum seeds, a gift for the pope. (CNS photo/Paul Haring)

VATICAN CITY (CNS) — Even with 45,000 people — mostly young adults — gathered in St. Peter’s Square, one could hear the sound of splashing water from the square’s two decorative fountains.

The hush was part of the ebb and flow of silence and song that marked the Taize ecumenical community’s pilgrimage to Rome Dec. 28-Jan. 2, bringing young adults together for quiet prayer, the singing of Taize chants and reflections on Scripture.

The format used for evening prayer service hosted by Pope Benedict XVI Dec. 29 in St. Peter’s Square was repeated twice each day in seven Rome basilicas, where the young adults sat on thin mats or on their coats on the cold marble floor for midday and evening prayer.

“Along with silence, song occupies an important place in your communal prayers,” the music-loving Pope Benedict told the young people. “Song is a support for and an unequaled expression of prayer.”

The prayer services were not exuberant, chatty gatherings. For example, although more than 4,000 young people scrunched together on the floor of the Basilica of St. Mary Major Jan. 1, the chants, low lighting and hundreds of flickering candles left a stillness in the church that continued more than two hours after the formal service ended.

Jennifer Pang, a 30-year-old Catholic pilgrim from Toronto, told Catholic News Service, “The music plays a role. It’s a good way to get you into a prayer mode. The candles, the icons, the music — the whole environment makes it easier.”

“Many young people say they have a hard time praying, but look around the cross — they’ve been here two hours.”

On their knees, the young people gathered around a large cross, advancing slowly to take the place of their peers who adored the cross by placing their forehead on it.

Although as 10 p.m. came and went, ushers at St. Mary Major would not let anyone else into the basilica, no one hurried those still praying inside. White-robed brothers of the Taize community stayed kneeling at the foot of the cross while a choir and mini-orchestra continued playing the Taize hymns in Latin, French, English, Spanish, Polish or Russian.

“Many young people say they have a hard time praying, but look around the cross — they’ve been here two hours,” said Jesuit Father Vlastimil Dufka, a campus minister and professor of liturgy and liturgical music at Trnava University in Slovakia. He played the oboe in one of the volunteer music groups that led the Taize pilgrimage prayer services in Rome.

The community’s base in Taize, France, is home to about 100 monks — about half Catholic and half Anglican or Protestant. Founded in 1940 by Brother Roger, a Swiss Protestant, as a place of reconciliation and peace, the community attracts thousands of young people from all over the world each year.

Addressing the pilgrims — as well as the accompanying Orthodox and Protestant pastors — at the end of the Dec. 29 prayer service at the Vatican, Pope Benedict emphasized the Taize community’s ecumenical character and its promotion of Christian unity through shared prayer.

And Pope Benedict told the young people that the deepest meaning of their lives would be found in believing in and following Christ.

“Sometimes evil and the suffering of the innocent create doubts and trouble you, and saying ‘yes’ to Christ becomes difficult,” he said.

“But this doubt does not make you unbelievers,” he told the young people, most of whom were 16-35 years old. Christ comes to the aid of those seeking deeper faith, he said, and Christ gives his church to believers to support them in their journey and spread the faith to others.

Stephanie Czarnik, a 29-year-old Catholic from Flint, Mich., said she often gets the feeling that many of the people filling U.S. Catholic churches are there mostly out of a sense of tradition.

“But young people need a strong experience; they need someone to listen to their questions. Taize encourages an exploration of faith,” she said. “There’s been this sense that if you are doubting, if you have questions, then there’s something wrong. Taize doesn’t make you feel that way.”

Brother Alois Leser, the Taize prior and a Catholic, told Pope Benedict, “What unites us is stronger than what divides us: one baptism and the same Word of God unite us. We have come here this evening to celebrate this unity around you, a unity which is real even if it is not yet fully realized. It is when we turn together toward Christ that it grows deeper.”

While Taize-like prayer services are held around the world, the community has not founded a movement or attempted to become its own church.

In Rome, the young people introduced themselves to one another and prayed together, but also talked about their differences.

Gregory Stark, a 21-year-old Episcopalian and senior at Kenyon College in Gambier, Ohio, said, “When you have a broad group of people you have to decide what you stand for. At Taize, the focus is on Jesus and reading Scripture…. Taize doesn’t exist to provide dogma, but to bring people together to discuss them and work through the messiness.”

Editors: The Taize community will be sponsoring an ecumenical meeting in the United States May 24-27. For more information see http://www.taize.fr/en_article14641.html.

NEXT: Thanks be to mothers of priests, Vatican official says