Despite evil, human beings are hard-wired for peace, pope says 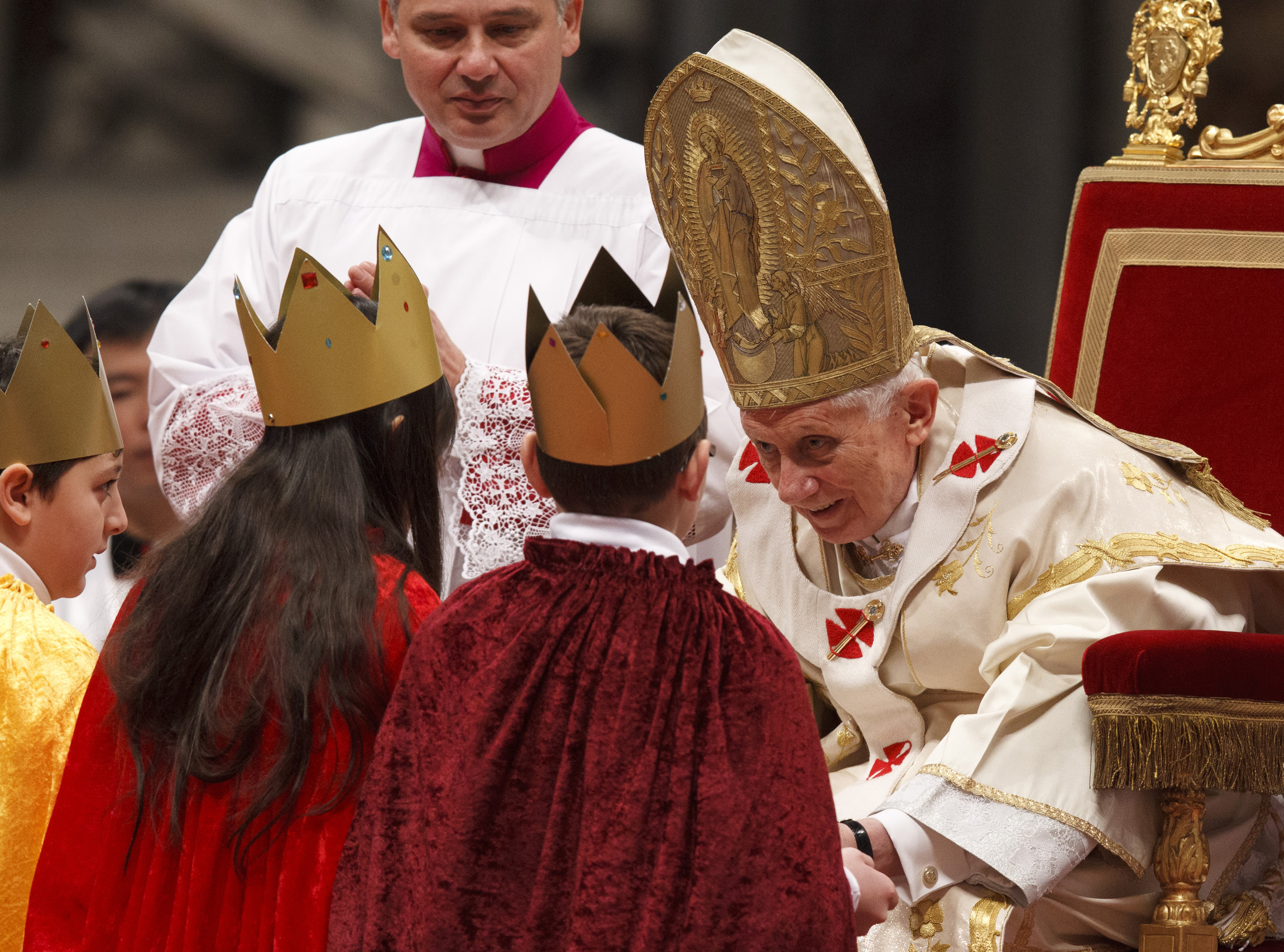 VATICAN CITY (CNS) — Welcoming in the new year, Pope Benedict XVI said that despite the injustice and violence in the world, every human being yearns for and is made for peace.

“Man is made for peace, which is a gift of God,” but also something individuals must work tirelessly to build, he said.

The pope celebrated Mass in St. Peter’s Basilica Jan. 1, which the church marks as the feast of Mary, Mother of God and as World Peace Day.

Thousands of people filled the basilica, which was decorated with white roses, small yellow flowers and evergreens. In the crowd was a group of children wearing colorful capes and cardboard crowns in memory of the three kings who traveled to Bethlehem; three of the children brought offertory gifts to the pope.

Prayers for peace were offered in five languages; in Arabic, the prayer asked that Mary “awaken in government leaders, legislators and men and women of science respect and concern for motherhood, God’s supreme gift to humanity.”

No matter how many troubles in the world or in one’s life, “there is good in the world and this good is destined to conquer all thanks to God, the God of Jesus Christ, incarnate, died and risen,” Pope Benedict said.

In his homily, the pope quoted from the peace day message he had sent to government leaders around the globe.

Despite the “tension and conflict caused by growing instances of inequality between rich and poor, by the prevalence of a selfish and individualistic mindset which also finds expression in an unregulated financial capitalism,” as well as terrorism and crime, “I am convinced that ‘the many different efforts at peacemaking which abound in our world testify to mankind’s innate vocation to peace.'”

People are called to find an inner peace with God by living according to his will, and to enrich that gift by living peacefully with and for others, including all of creation, he said.

Inner peace is possible even when struggling with “problems, darkness and distress,” he said; Mary is a prime example with how she faced uncertainty and challenges with calm and peaceful reflection.

“It’s this inner peace we would want to have in the midst of sometimes tumultuous and confusing events,” he said.

Nothing can destroy a Christian’s inner peace because it is rooted in the certainty that there is a good, loving and omnipotent God who always offers his grace and peace, the pope said.

“In fact, suffering, trials and darkness don’t corrode, but strengthen our hope, a hope that never disappoints,” he said.

Pope Benedict also tweeted a special blessing in eight languages to his more than 2 million Twitter followers: “May Our Lord bless you and watch over you in the new year.”

Speaking after the Mass from his apartment window above St. Peter’s Square, the pope highlighted the importance of peacemakers, who, day after day, “try to conquer evil with good, with the strength of truth, with the weapons of prayer and forgiveness, with honest work done well, with scientific research serving life and with works of mercy.”

He said there are many peacemakers in the world, but they work without fanfare, acting quietly “like yeast helping humanity rise up to God’s plan.”

The pope also presided over an evening prayer service with eucharistic adoration and the singing of a special hymn of thanksgiving to God Dec. 31 in St. Peter’s Basilica.

No matter how many troubles in the world or in one’s life, “there is good in the world and this good is destined to conquer all thanks to God, the God of Jesus Christ, incarnate, died and risen,” he said.

It’s easy to forget that the good will win, since evil acts like homicides, violence and injustice are what grab the headlines, rather than acts of love and kindness, which often remain hidden in the background, he said.

If people are to truly understand the world and what life is about, they must go beyond the news flash and be able to silently reflect, think and listen to God.

“That way our soul can find healing from the inevitable wounds of daily life” while the mind tries to see things with God’s eyes and learn to “look with truth upon our actions and also the evil present in us and around us.” Such self-reflection is necessary for “conversion, which makes one wiser and better” and more able to act in solidarity and communion, he added.

Christians are people of hope, especially in the midst of darkness, because they know that what’s bad in the world doesn’t come from God but comes from human sin and error, the pope said.

Christ is the true source of life and hope and it’s this certainty “that prompts us to look to the new year with confidence,” he said.

After the prayer service, the pope went by popemobile into St. Peter’s Square, where he visited the Vatican’s Nativity scene. While the Swiss Guard band played “Silent Night,” the pope knelt before the manger scene for a few moments of prayer.

On Dec. 30, the feast of the Holy Family, the pope prayed at his noon blessing for all the families in the world.

Just like the Holy Family, mothers and fathers worry about properly raising their children, hoping to create honest and responsible adults and citizens, the pope said.

Children need not only the gift of faith, but also the personal example of their parents, he said.

“Let us pray that every child is welcomed as a gift from God and is supported by the love of a father and mother so as to grow like the Lord Jesus.”

He asked that Mary and Joseph’s love, fidelity and dedication inspire today’s Christian couples to see that “they are not friends or lords over their children’s lives, but custodians of this unparalleled gift of God.”

PREVIOUS: Agenda for a year of faith: looking ahead for the church in 2013