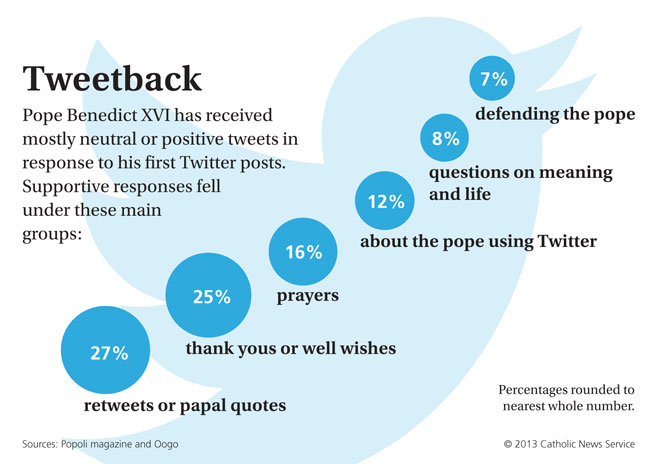 ROME (CNS) — In his first month on Twitter, Pope Benedict XVI sent two dozen mini-messages in nine languages, generating more than 270,000 comments and responses from other Twitter users, according to a study conducted by an Italian Jesuit magazine and an Italian new-media consulting firm.

While some of the comments were harsh and even obscene, negative comments accounted for about 8 percent of the total, according to the magazine Popoli and the media firm Oogo. They published the results of their “sentiment analysis” of tweeted reactions to Pope Benedict Jan. 28.

According to the study, more than 200,000 — about 82 percent — of the responses were simply retweets or “neutral” comments on what the pope tweeted, in 140 or fewer characters, Dec. 12-Jan. 15 through his @Pontifex accounts.

Nearly 10 percent of the tweeted reactions were positive, the study found.

“People are (in social networks),” said Stefano Femminis, the head of a magazine that studied activity related to Pope Benedict’s account on Twitter. “They are there with their problems, their questions and also their criticisms. And it’s important for the church to be there and to dialogue with those who are furthest from it or most critical of it.”

The magazine reported 26,426 “positive” tweets, which the study divided into categories, such as:

* 26.5 percent of the positive tweets were retweets of the pope’s message with a brief comment, or cited the pope’s words.

* 25 percent thanked the pope or wished him well.

* 15.6 percent were prayers, particularly after the pope mentioned suffering in Nigeria and Syria.

* 12 percent were “welcome to Twitter” or other comments on the pope joining the social network.

* 7.6 percent asked the pope questions about meaning and life.

* 7 percent were comments defending the pope.

Popoli and Oogo defined 22,542 tweets as “negative” and divided them into categories:

* 20 percent were criticisms of the perceived power or wealth of the Vatican.

* 16 percent were ironic or satiric.

Stefano Femminis, the director of Popoli, told Vatican Radio Jan. 29 that Pope Benedict has said the church must be where people are, including in social networks.

“People are there,” Femminis said. “They are there with their problems, their questions and also their criticisms. And it’s important for the church to be there and to dialogue with those who are furthest from it or most critical of it.”

NEXT: Why not women priests? The papal theologian explains