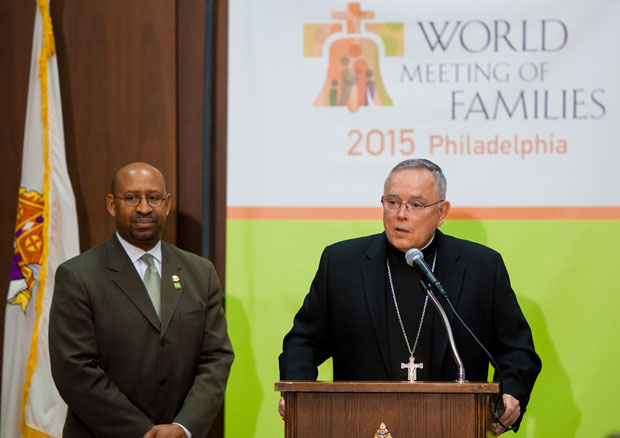 Read an explanation of the symbols in the World Meeting of Families logo.

Global attention will turn to Philadelphia in three years when the city expects to welcome hundreds of thousands of families for the World Meeting of Families — and possibly the new pope.

Archbishop Charles Chaput led a morning press conference Feb. 25 to announce that the Vatican confirmed earlier in the day the long-anticipated selection of Sept. 22-27, 2015 as the date for the gathering of families, Catholic and non-Catholic, from around the world.

In his remarks, he thanked Pope Benedict XVI “for choosing Philadelphia and for setting these dates before he concludes his ministry as pastor of the universal Church.”

The pope will resign from his ministry Thursday evening, and a conclave to choose a new pope will be called soon thereafter.

The last World Meeting of Families was held in Milan, Italy, in 2012 and drew 350,000 people for events supported by 5,300 volunteers. On the closing day, more than 1 million participated at Mass with Pope Benedict.

(See related story: A brief history of the World Meeting of Families)

Events of this magnitude “demand a great deal of planning and work,” Archbishop Chaput said. “They draw many thousands of people – in this case, many thousands of families with children of all ages.  But these events also become moments of grace.  They have the power to transform, in deeply positive ways, not just the spirit of Catholic life in our region, but the whole public community.  We’re excited to begin this journey.”

The World Meeting of Families began in 1994 at the behest of Pope John Paul II. It is held every three years has since grown to attract thousands of families for days of events – capped by the final day’s celebration of Mass by the Pope.

The Philadelphia event will be the first to be held in the United States. Workshops and conferences are expected to discuss many facets of contemporary family life in order to strengthen and support it.

“The World Meeting of Families is meant to be a gift not just to Catholics in Philadelphia, but to every person of good will in the Commonwealth of Pennsylvania and surrounding areas,” Archbishop Chaput said. “Everyone with a generous heart is welcome to be a part of it, and I’ll be working closely with my brother bishops in the months ahead to encourage families across the United States and Canada and around the world to come to Philadelphia in September 2015.”

While the archbishop did not know how many would attend the five-day event, he said he and planners would gauge attendance at previous meetings and make an estimate for Philadelphia. The event is expected to draw families from across the eastern United States and other regions, plus Canada and Mexico and throughout the world.

(See the official website of the World Meeting of Families in Philadelphia and check CatholicPhilly.com’s special section for continuing updates.)

One thing he was sure of was that the cost for hosting the meeting will be high. He estimated the World Meeting of Families event in Milan cost 10 million euros, which is more than $13 million in U.S. currency.

“I’ll be responsible for raising that money,” Archbishop Chaput said. He mentioned the Philadelphia Archdiocese’s financial difficulties, which led to administrative downsizing and layoffs last year, and that he expected to raise the necessary funds for the meeting “from outside sources” and with the help of a fundraising group that he did not name.

The archbishop also said he didn’t know why Pope Benedict chose Philadelphia for the event – “His Holiness didn’t tell me,” he said – but noted some good reasons.

The city is seen as the starting point for the United States and the foundation of its political ideals, including human freedom and especially religious freedom, which Pope Benedict mentioned during his 2008 visit to the U.S.

“And he’s always seen the strength of the family as a guarantee of human maturity and freedom,” the archbishop said. “The more we encourage and support the integrity of families, the healthier society becomes.”

“The Church in Philadelphia is also a community in need of healing and renewal,” Archbishop Chaput said. “We have a very serious duty to help persons who have been hurt in the past to heal, and to better protect children and young people moving forward.

“Beyond this important duty, though, the Church still has the obligation to preach Jesus Christ. She still has the duty to help people find God and to live their faith with joy and conviction.”

The World Meeting of Families, he said, will give Philadelphia Catholics and others an opportunity “to show their love of God and his Church to the world, to deepen God’s presence in their own families, and to share Jesus Christ with a world that urgently needs him.”

Joining the archbishop at the press conference was Philadelphia Mayor Michael Nutter. He and Pennsylvania Governor Tom Corbett have been named honorary co-chairs for the event by Archbishop Chaput.

Neither Nutter nor the archbishop would confirm locations of events but the mayor was confident that city services would be able to handle the expected visitors. He was also excited about the opportunity to show off the city on a worldwide stage.

“This will elevate Philadelphia as one of the great international cities in the world,” Nutter said. “We’re more than prepared to handle this logistically. We’ll be able to pull this off in magnificent fashion.”

Himself a product of Catholic education at St. Joseph’s Preparatory School and the former Transfiguration of Our Lord School in Philadelphia, Nutter said the significance of a foucs on family life extends beyond the Catholic community.

“Family is the cornerstone of society and strengthening it serves all of our people in Philadelphia – Catholic and non-Catholic alike,” he said. “A focus on the family will help this city. We want to reach out to the religious community, to the clergy. All of us need prayer, all of us need healing.”

He and the archbishop, Nutter said, “stand in common cause in promoting family life.”

Gov. Corbett, who was in Washington, D.C., for the Governors meeting and could not attend the press conference, praised the diversity of faiths in Philadelphia and Pennsylvania, both historically and today.

“As the first ever American host for the World Meeting of Families, I am confident that Pennsylvanians — of all faiths — will warmly welcome all those who will join us for this historic event.

Archbishop Chaput speculated that a new pope, who will be elected by the College of Cardinals in Rome likely in coming weeks, would visit Philadelphia as the capstone to the World Meeting of Families event by celebrating Mass on the concluding day, Friday, Sept. 27.

He expected more details to emerge especially after he, Corbett, Nutter and others travel to Rome to meet with the World Meeting of Families event organizers, including its sponsor, the Pontifical Council for the Family.

Archbishop Chaput said the meeting would also include the newly elected pope – whoever he may turn out to be. 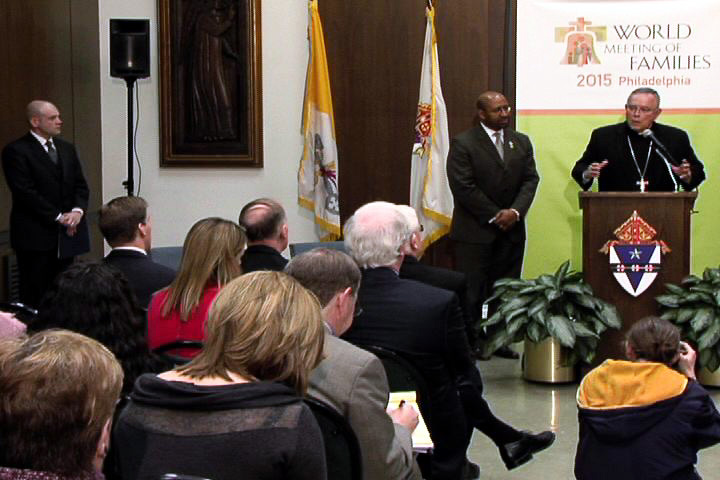 PREVIOUS: What the logo for World Meeting of Families in Philadelphia means

NEXT: A brief history of the World Meeting of Families