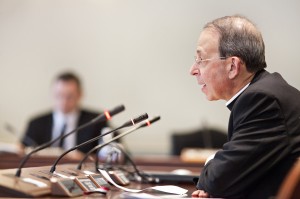 ANNAPOLIS, Md. (CNS) — The Catholic Church’s objection to the death penalty comes from its consistent teaching that life must be protected from conception to natural death, said Baltimore Archbishop William E. Lori.

“At the core of all of (the church’s) public witness is an evident consistency that reflects our reasoned belief that every human life is sacred and to be protected, because every life comes from God, and is destined to return to God as our final judge,” he said.

Archbishop Lori said that view compels him to advocate against Maryland’s death penalty.

He testified Feb. 14 to support a proposed repeal of Maryland’s death penalty at back-to-back committee hearings in the state’s Senate and House of Delegates.

His testimony followed Gov. Martin J. O’Malley, who also spoke in support of the repeal bill he introduced. Other Maryland officials also testified as part of the governor’s panel.

Late Feb. 21, the state Senate Judicial Proceedings Committee voted 6-5 to send the measure to the Senate floor. It was the first time in many years that the committee advanced repeal of the death penalty to a full Senate vote passed the bill and was to be taken up by the full Senate the next week.

The state House of Delegates was to consider the measure in coming weeks.

The death penalty hearings, held by the Senate committee and the House Judiciary Committee, were the first time Archbishop Lori has personally testified before the Maryland Legislature.

The archbishop told lawmakers there are many “worthy arguments” for death penalty repeal, but that the faith community’s perspective “goes beyond these issues.”

“While those who have done terrible harm to others deserve punishment, we urge a response that meets evil with a justice worthy of our best nature as human beings, enlightened by faith in the possibility of redemption and forgiveness,” he said.

Archbishop Lori told The Catholic Review, newspaper of the Baltimore Archdiocese, that the issue affects him personally, as the wife of a now-deceased cousin was murdered “years ago.”

His family did not seek capital punishment because they did not expect it to bring them closure, he said.

The incident has been in his mind as he has pushed for death penalty repeal in the state, he said.

“Once it touches your family, it gives (the issue) a little more impetus,” he said. “It’s closer to home.”

In his testimony, Archbishop Lori expressed “respect and compassion” for victims’ families, and urged lawmakers to devote more resources to helping them.

“I hope my presence today conveys to you a sense of how important this issue is to the Catholic Church,” he said.

Archbishop Lori is aware that not all Catholics agree that the death penalty should be repealed, and he told The Catholic Review that he urges those who disagree “to look at the reasonable position that the church is offering.”

“We also have the example of Blessed John Paul II, who many times intervened before the execution of someone on death row. I think that should also speak powerfully to us,” he said.

Baltimore Auxiliary Bishop Denis J. Madden also attended the hearings, although he did not testify. He said he hoped his presence also signified his support for repeal.

In 2008, Bishop Madden sat on the Maryland Commission on Capital Punishment, which ultimately recommended death penalty repeal. He said that many of the questions asked by legislators during the hearing were addressed by the panel and included in their final report.

The death penalty, along with gun violence and abortion, topped the issues Maryland Catholics discussed with their state lawmakers Feb. 18 during the Maryland Catholic Conference’s annual Lobby Night.

Archbishop Lori, Bishop Madden and Baltimore Auxiliary Bishops Mitchell T. Rozanski were among the state’s bishops’ who attended the event.

The event began in the afternoon at St. John Neumann with prayer and briefings from the catholic conference’s staff on legislation related to pro-life issues, education and social concerns. Following the presentations, Catholics met with their lawmakers to advocate for laws reflecting Catholic social teaching.

Wiering is on the staff of The Catholic Review, newspaper of the Baltimore Archdiocese.

PREVIOUS: Canon law sets specific steps to follow before a parish can be closed