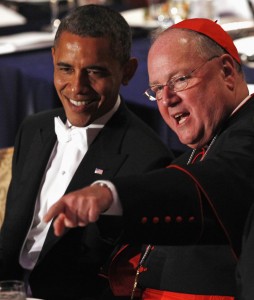 “We accept your invitation to address these areas together, always with the civility we have both encouraged in public discourse,” the president U.S. Conference of Catholic Bishops said in the letter Feb. 22.

“We welcome specifically an opportunity to resolve the perplexing issue of the redefining of our religious ministries,” Cardinal Dolan wrote. “Surely we should be able to find some ground where neither of us is asked to compromise conscience.”

In response, a White House official said Feb. 28 that Cardinal Dolan’s warm wishes were welcome and that the president “looks forward to continuing our respectful collaboration.”

The cardinal also renewed good wishes and offered prayers for Obama as he prepared to tackle a long list of goals for his second term that were outlined in his inaugural and State of the Union addresses.

Recalling a meeting with Obama at the White House, Cardinal Dolan pointed to the president’s stated desire “to cooperate with us for the good of our beloved country,” particularly in the church’s educational, charitable and health care services.

“The bishops of the United States cannot rest so long as the vital ministry the Catholic Church carries out — for people of all or no creeds — remains threatened due to an erosion or loss of the constitutional guarantee of the freedom to serve without violation of our faith,” he said.

Cardinal Dolan said Obama’s second term “provides a special opportunity” to strengthen and promote marriage, family, churches and faith-based ministries of service in order to “keep the American dream alive and well for generations to come.”

The letter also listed a series of issues in which the U.S. bishops are ready to work with Obama “for the good of all people who live in and love our nation.”

* Increased attention to the needs of mentally ill people.

* Access to comprehensive, affordable and “life-affirming” health care, “which we believe includes the pre-born child, the undocumented and the dying.”

* Developing a financially responsible federal budget that protects the poor, sick and elderly.

* Peace in the Middle East and an end to the war in Afghanistan.

* Efforts to strengthen family life and uphold the importance of responsible fatherhood.

“These issues of mutual importance are hardly new … . All of them flow from God’s own holy word in the Bible and the truth about the human person revealed in Jesus as faithfully passed on my the church,” Cardinal Dolan wrote.

“They also resonate, as you have observed, from the most noble values of America, which the founders of our country identified in the Declaration of Independence as ‘self-evident truths,'” he added.