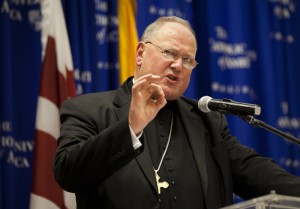 UPDATED — WASHINGTON (CNS) — In the nearly one week since the Department of Health and Human Services issued a new set of proposed rules on insurance coverage of contraceptives, serious concerns over the new rules began to emerge among the Catholic community in the United States, including the U.S. Conference of Catholic Bishops and some Catholic organizations.

The 80-page document released Feb. 1 by HHS attempts to address objections that the previous rules would force religious employers to stop providing employee health insurance because the federal requirement to include contraceptive coverage violates their religious beliefs. The issue has become known as the HHS mandate.

Cardinal Timothy Dolan, president of the USCCB, said in a statement Feb. 7 that over the past year the bishops had been assured by the Obama administration that church organizations “will not have to refer, pay for, or negotiate for the mandated coverage. We remain eager for the administration to fulfill that pledge and to find acceptable solutions — we will affirm any genuine progress that is made, and we will redouble our efforts to overcome obstacles or setbacks,” said the cardinal.

He said the bishops’ conference would submit its concerns through the formal 60-day comment process “in the hope that an acceptable solution can be found that respects the consciences of all. At the same time, we will continue to stand united with brother bishops, religious institutions, and individual citizens who seek redress in the courts for as long as this is necessary.”

Cardinal Dolan listed three key areas of concern: the narrow understanding of a religious ministry; compelling church ministries to fund and facilitate services such as contraceptives, including abortion-inducing drugs, and sterilization that violate Catholic teaching; and disregard of the conscience rights of for-profit business owners. A committee of bishops pointed out these concerns in a March 2012 statement.

“It appears to offer second-class status to our first-class institutions in Catholic health care, Catholic education and Catholic charities,” Cardinal Dolan said. “HHS offers what it calls an ‘accommodation’ rather than accepting the fact that these ministries are integral to our church and worthy of the same exemption as our Catholic churches.”

Highlighting problems with the proposal, the cardinal said, “It appears that the government would require all employees in our ‘accommodated’ ministries to have the illicit coverage — they may not opt out, nor even opt out for their children — under a separate policy.”

Cardinal Dolan also said the proposal refuses to acknowledge conscience rights of business owners who operate their businesses according to their faith and moral values.

“In obedience to our Judeo-Christian heritage, we have consistently taught our people to live their lives during the week to reflect the same beliefs that they proclaim on the Sabbath,” the cardinal said. “We cannot now abandon them to be forced to violate their morally well-informed consciences.”

Some entities were quick to issue opinions on the rules, which are open for a 60-day comment period. The rules are expected to be finalized this summer.

Critics of the proposed rules included the Becket Fund, a nonprofit, public interest law firm that represents several nonprofit and for-profit organizations in their lawsuits against the federal government, which challenge the requirement of the Affordable Care Act.

Hobby Lobby is a craft retailer owned by a Christian family. The owners object to being required to provide insurance that covers drugs that some consider to be abortifacients. The company has sued over the requirement. Its request for an injunction to protect it from providing the coverage while the legal challenge works through the courts was rejected Dec. 26 by Supreme Court Justice Sonia Sotomayor, who covers the federal court circuit handling the case.

Among the first in the nation to criticize the proposed rules was Philadelphia Archbishop Charles J. Chaput, who in a Feb. 4 column posted on CatholicPhilly.com called it an “ambiguous compromise.”

“The White House has made no concessions to the religious conscience claims of private businesses, and the whole spirit of the ‘compromise’ is minimalist,” he said.

“One of the issues America’s bishops now face is how best to respond to an HHS mandate that remains unnecessary, coercive and gravely flawed. In the weeks ahead the bishops of our country, myself included, will need both prudence and courage — the kind of courage that gives prudence spine and results in right action, whatever the cost,” Archbishop Chaput said.

The new proposals specifically said no nonprofit religious institution — including churches, universities, hospitals and charities — will have to “arrange, contract, pay for or refer for” contraception insurance for employees or students who want it.

But Duncan’s statement said the new proposal “does not meaningfully expand the ‘church-only’ exemption — which is the real relief that our clients are entitled to under our Constitution.”

Michael P. Warsaw, CEO of EWTN, also issued a Feb. 1 statement saying that the network’s initial conclusions about the rules “are not promising.”

He said it did not appear EWTN would qualify for the exemption, and the proposed process for self-insured entities “simply kicks this can farther down the road.”

“We will continue to study this notice with our attorneys, but are highly doubtful it will provide EWTN with any relief from this immoral mandate,” he said. “EWTN remains firmly committed to pressing forward with our case in the federal courts and will take all steps necessary to challenge this unjust mandate.”

Others said the new rules seem to accommodate the problems that led Catholic dioceses, universities and other organizations to sue over the previous proposed rules.

Bill Donohue, president of the Catholic League for Religious and Civil Rights, a harsh critic of the previous rules, said in a Feb. 1 statement that the new rules “appear to go a long way toward rectifying the most problematic provisions of the mandate. Essentially, the rules provide insularity for Catholic institutions: They will not be directly involved in providing health insurance coverage for contraception, sterilization and abortion-inducing drugs.”

He said many aspects of the new proposal need to be evaluated, but that the expansion of religious exemptions and the shift to using the Internal Revenue Code definition of eligible organizations “is a sign of good will by the Obama administration toward the Catholic community.”

He said the issue of private employers who raise a religious objection to providing contraceptive insurance is unresolved, but, “because the new rules have not been finalized, and there is an opportunity for further public discussion, more progress may yet be made.”

The revised rules say that employees of institutions that have been exempted from providing contraceptive coverage may receive coverage under separate policies provided by insurance companies. The rules say employers would have no role in paying for or administering the policies.