In farewell to cardinals, Pope Benedict pledges obedience to next pope 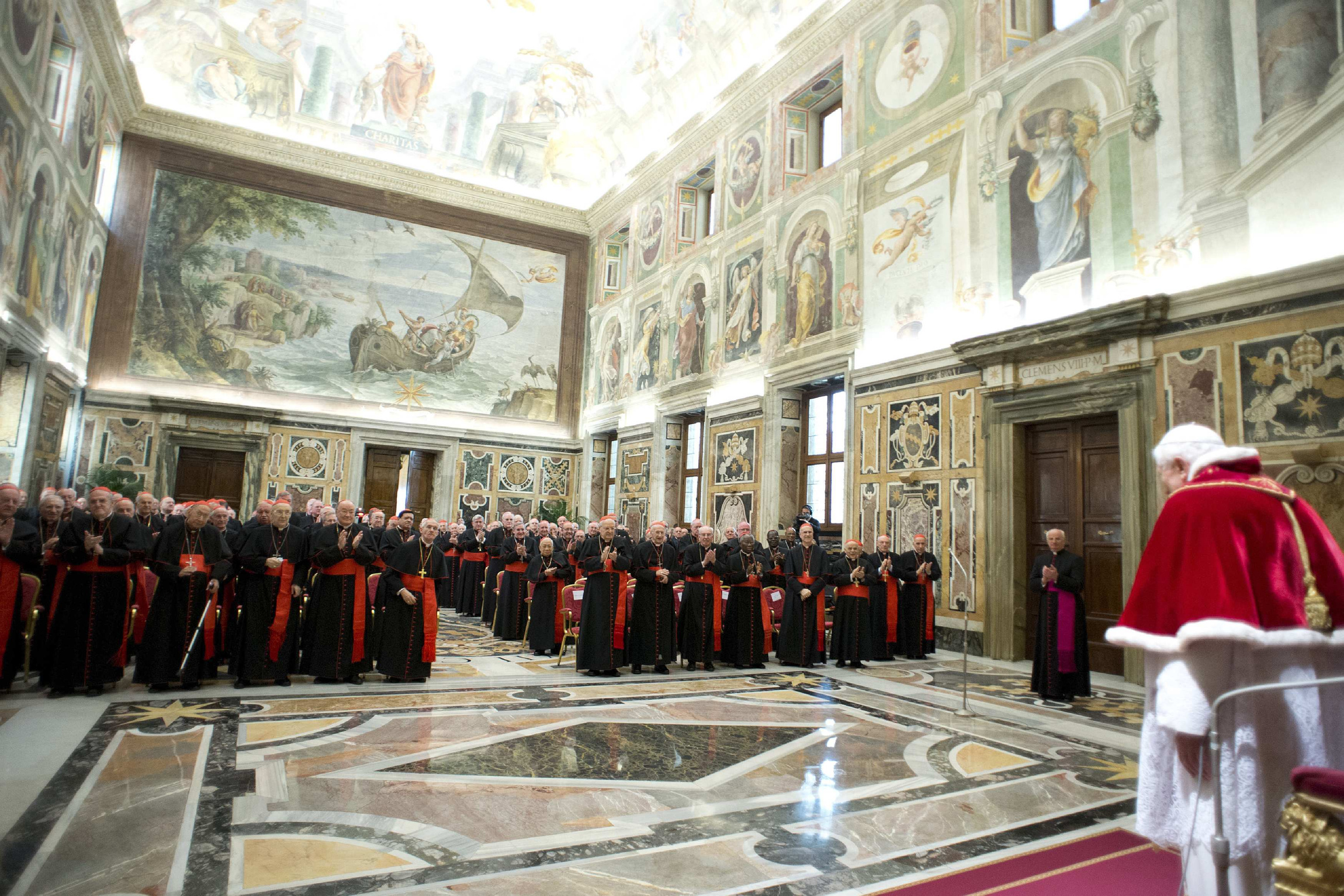 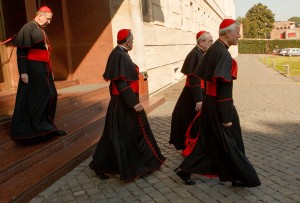 VATICAN CITY (CNS) — The Clementine Hall is traditionally the place where cardinals bid farewell to popes at the end of a pontificate, but usually when the pope in question is lying in state before his funeral.

But on Feb. 28, hours before resigning from the papacy, Pope Benedict XVI briefly addressed the College of Cardinals, calling for unity and harmony among the men who will choose his successor and pledging his “unconditional reverence and obedience” to the next pope.

Pope Benedict addressed 144 cardinals, including many of the 115 under the age of 80 who are eligible and expected to vote in the upcoming conclave.

“I will continue to be close to you in prayer, especially in the next days, that you may be fully docile to the action of the Holy Spirit in the election of the new pope,” Pope Benedict told the gathering in the Vatican’s Apostolic Palace. “May the Lord show you what is wanted of you. Among you, among the College of Cardinals, there is also the future pope, to whom today I promise my unconditional reverence and obedience.”

The cardinals are expected to begin meeting March 4 to plan the papal election.

Looking back on his almost eight-year pontificate, Pope Benedict recalled “very beautiful moments of radiant light on the path of the church, together with moments in which the occasional cloud thickened in the sky.”

The pope invoked God’s help in building unity, “so that the College of Cardinals might be like an orchestra, where diversities, expressive of the universal church, always run together to a superior and harmonious concord.”

Pope Benedict also recalled the previous day’s general audience in St. Peter’s Square, attended by an estimated 150,000 people, saying that the gathering demonstrated that the “church is a living body, animated by the Holy Spirit, and truly lives by the strength of God.”

Referring to the work of the late German theologian Father Romano Guardini, the pope said the church keeps alive the mystery of the incarnation since its members “offer to God their own flesh and, in their very poverty and humility, become capable of generating Christ today in the world.”

The cardinals responded with a standing ovation.

Prior to the pope’s remarks, Cardinal Angelo Sodano, dean of the College of Cardinals, addressed a short tribute to the departing pontiff, whose resignation was scheduled to take effect at 8 p.m. the same day.

“With great trepidation the cardinal fathers present in Rome rally around you today to show once again their profound affection and express to you their deep gratitude for your witness of self-denying apostolic service, for the good of the church of Christ and all humanity,” the cardinal said.

Cardinal Sodano concluded his remarks with a German expression, “Vergelt’s Gott”: “May God reward you!”

Following the brief ceremony, Pope Benedict received individual greetings from the assembled cardinals and from officials of the Roman Curia, the church’s central administration at the Vatican. Most kissed the pope’s ring, with some also genuflecting before they exchanged a few words with the pope; a few were brought up in wheelchairs.

Some cardinals handed the pope what appeared to be personal notes or small presents; Vienna’s Cardinal Christoph Schonborn, one of Pope Benedict’s former students, gave him a book.

NEXT: The last flight of Pope Benedict XVI