Papal biographer: Fixing Vatican bureaucracy is a top job for next pope 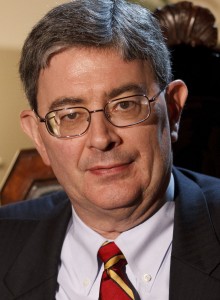 George Weigel, a Catholic author and commentator, is pictured in Rome in this Jan. 12, 2011, file photo. Weigel said the next pope urgently needs to reform the Vatican bureaucracy. (CNS photo/Paul Haring)

VATICAN CITY (CNS) — Threats to religious freedom around the world, the human costs of globalization, media transformed by the revolution in information technology — these are some of the challenges that the next pope is bound to face in leading the church.

According to one highly informed observer, the next pope will also have an urgent task at home: reforming the Roman Curia, the church’s central administration at the Vatican.

“The curia not infrequently caused acute embarrassment to (Pope) Benedict XVI, putting obstacles in the way of his evangelical, catechetical and pastoral efforts, and ill-serving the pope’s attempts to reframe the global agenda of debate on the crucial issues facing humanity,” writes George Weigel in his new book, “Evangelical Catholicism.”

The author, a biographer of Blessed John Paul II and a well-known commentator on Catholic issues, paints a picture of an inefficient bureaucracy where incompetence often goes unpunished and all too many players serve their own ambition rather than the interests of the church.

“Things are in fact worse now, in my view, than they have been in perhaps 40 years,” Weigel told Catholic News Service. “Everyone who does not have a vested interest in the status quo understands that a major task in the early going of the next pontificate is going to be not only to change structure but to change attitude.”

Charges of mismanagement and corruption within the Vatican bureaucracy were spectacularly documented in 2012, in the so-called “VatiLeaks” of confidential correspondence.

Some of the most serious charges appeared in letters written by Archbishop Carlo Maria Vigano, formerly the second-highest official in Vatican City State. The archbishop wrote to Pope Benedict in early 2011, warning of “corruption and abuse of power long rooted in the various departments” of the governorate and criticizing the “inexperience” of advisers whom he said had led the Vatican to lose millions of dollars in bad investments.

Pope Benedict named the archbishop nuncio to the United States in October 2011, and he remains in that position today.

“Archbishop Vigano is a hero,” Weigel said. “His description of the problems is a real and accurate one, and I hope that the next pontificate will address those problems which he’s described in a forceful way.”

Part of the problem, Weigel said, is that the headquarters of the universal church is still dominated by the citizens of a single nation, Italy.

“This curia needs to be thoroughly internationalized,” he said. “It needs to be detached from what has become, according to one of my Italian friends, a deeply rooted culture of corruption in Italy as a whole, which has a way of seeping over the boundary between Italy and Vatican City.”

Though much of the curial dysfunction is evident only to locals, it impedes the Vatican’s effectiveness in ways directly relevant to Catholics and others around the world. Weigel pointed to the widespread outrage that broke out in 2009 after Pope Benedict lifted the excommunications of four traditionalist bishops in the Society of St. Pius X. The pope’s advisers had failed to warn him that one of the four, Bishop Richard Williamson, had a well-documented history of anti-Semitic statements and Holocaust denial.

In his new book, Weigel lays out recommendations for restructuring the curia to make it more representative of the faith and more effective in advancing the church’s mission. Among other measures, he suggests splitting the Secretariat of State into two bodies, responsible for internal affairs and external diplomatic relations respectively; and reducing the number of Vatican offices that issue public statements, to reduce the possibility of confusion over the pope’s views or church teaching.

Such an overhaul is not something that the next pope can or should personally focus on, Weigel said: “It’s not the job of the pope to move slots around on an organization chart, but he needs to hire somebody, he needs to have a secretary of state, a chief of staff … who can take this on and will have his authority and his backing to do this properly.”

Even more necessary than technical changes in administration, Weigel said, is a “change of curial culture and cast of mind.”

While emphasizing that a “lot of good people work there who are dedicated to the church, who think of their service not in careerist terms but as real service to the church,” Weigel said that such people are under-represented at the highest levels.

“That requires, as far as is humanly possible, an attempt to bring people here to Rome who, in fact, in some respects don’t want to be here,” Weigel said, suggesting that the ideal Vatican officials are those who regard their time in Rome as a “sacrifice for the good of the larger church” and who “fully intend to go back to their local churches when their service here has ended.”

NEXT: Vatican official: German bishops’ rule on ‘Plan B’ for rape acceptable