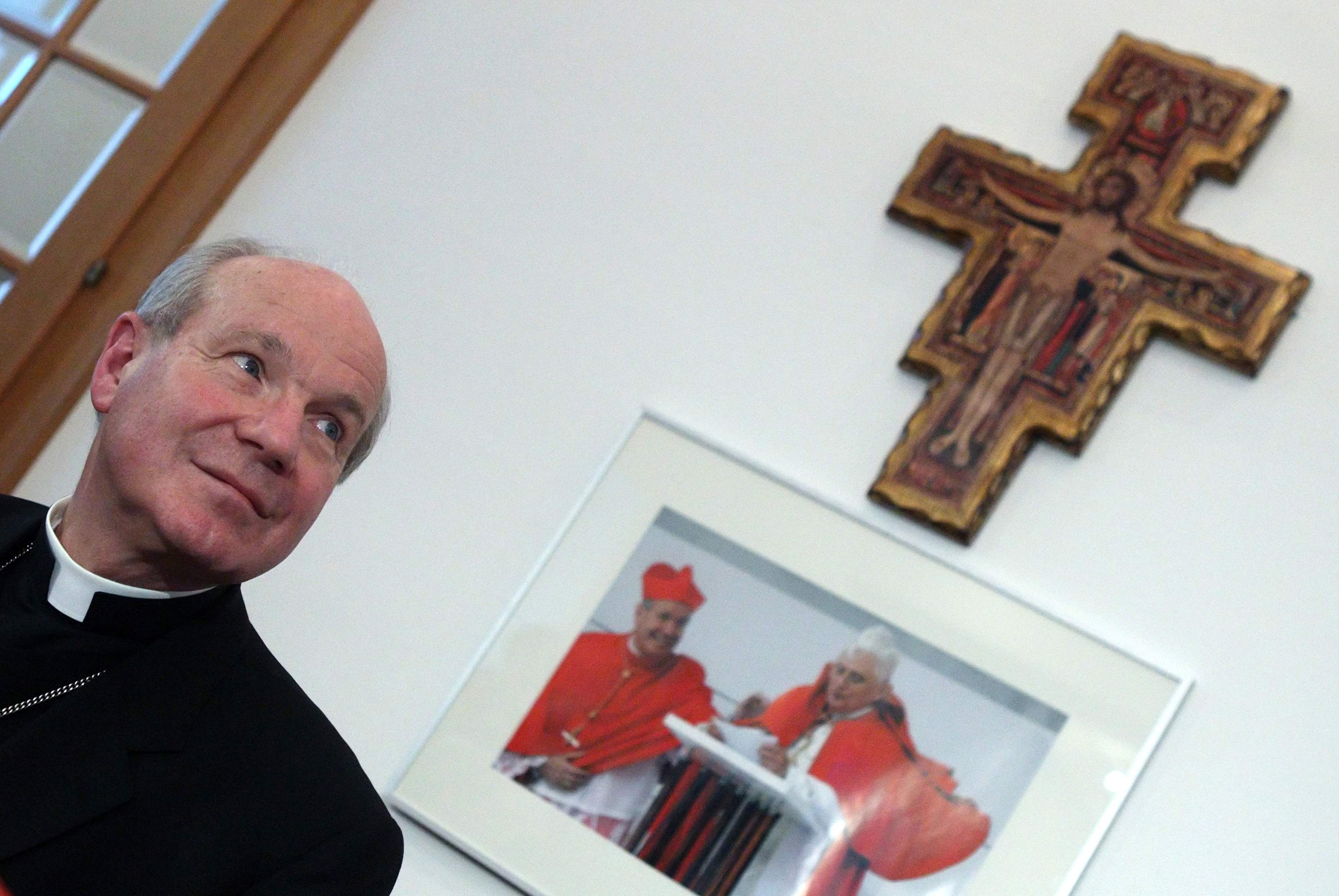 Austrian Cardinal Christoph Schonborn addresses a news conference in Vienna Feb. 11, after Pope Benedict XVI announced he would resign at the end of the month. The 85-year-old pontiff said he no longer has the energy to exercise his ministry over the universal church. (CNS photo/Heinz-Peter Bader, Reuters)

WASHINGTON (CNS) — Pope Benedict XVI’s announcement that he planned to resign Feb. 28 stunned and shocked religious and political leaders around the world.

From Africa to Europe, Asia and Latin America, Catholic leaders offered warm words of praise and pledged to pray for the 85-year-old pontiff’s health. They pointed to Pope Benedict’s love of the church as a key factor leading to his resignation.

“Only a great love for Jesus Christ, for his church and great humility can lead someone to take such a step,” said Havana Cardinal Jaime Ortega Alamino.

At the same time, European political leaders recalled the pope for his humble nature and held up his work to unite the people of the world.

Cardinal Keith O’Brien of St. Andrews and Edinburgh, Scotland, said he was “shocked and saddened” to hear of the pope’s decision Feb. 11.

“I know that his decision will have been considered most carefully and that it has come after much prayer and reflection,” Cardinal O’Brien said.

He offered prayers from the Scottish church for Pope Benedict “at this time of deterioration in his health as he recognizes his incapacity to adequately fulfill the ministry entrusted to him.”

Archbishop Vincent Nichols of Westminster, England, president of the Bishops’ Conference of England and Wales, said the pope’s announcement “has shocked and surprised everyone.”

“Yet, on reflection, I am sure that many will recognize it to be a decision of great courage and characteristic clarity of mind and action,” Archbishop Nichols said.

“I salute his courage and his decision,” he added.

Cardinal Reinhard Marx of Munich and Freising, Germany, president of the Commission of the Bishops’ Conferences of the European Community, commended Pope Benedict for shaping the church with his “clear theology” in an effort to overcome “the danger of Europe forgetting its Christian roots and eventually losing its soul.”

The pope’s theological contributions will serve to inspire the Catholic Church throughout Europe and help build the church around the world, he said.

Anglican Archbishop Justin Welby of Canterbury said he learned of Pope Benedict’s resignation with a “heavy heart but complete understanding.” He offered thanks for the pope’s priestly life “utterly dedicated in word and deed, in prayer and in costly service to following Christ.”

“He has laid before us something of the meaning of the Petrine ministry of building up the people of God to full maturity,” Archbishop Welby said.

The Anglican archbishop credited the pope for his “witness to the universal scope of the Gospel and a messenger of hope at a time when Christian faith is being called into question.” He cited Pope Benedict’s teaching and writing for bringing a “remarkable and creative theological mind to bear on the issues of the day.”

“We who belong to other Christian families gladly acknowledge the importance of this witness and join with our Roman Catholic brothers and sisters in thanking God for the inspiration and challenge of Pope Benedict’s ministry,” Archbishop Welby added.

In Turkey, Msgr. Louis Pelatre, apostolic vicar of Istanbul, expressed surprise at Pope Benedict’s the decision, telling Catholic News Service “no one expected this, even those very close to him. But we pray and go forward.”

“It was his personal decision. No one can influence him. We are no longer in a world where one can stay in the same position if he no longer feels he is no longer capable of fulfilling his duties. He was very tired. We know that and we saw that,” Msgr. Pelatre said.

Like their counterparts elsewhere, African church leaders said they were shocked by the papal announcement. Nigerian leaders in particular commended Pope Benedict for being “on the side of truth.”

“He (was able) to stand and defend them come rain or shine and has continue to uphold them as laid down by the founding fathers of the church,” the archbishop said.

In Latin America, Cardinal Oscar Rodriguez Maradiaga of Tegucigalpa, Honduras, said his first reaction to the pope’s announcement was one of “understanding, considering his frail health.”

“This is a tireless job, and he dedicates all his time to the church. It is a decision of faith,” Cardinal Rodriguez Maradiaga said.

He told media in the Honduran capital that many of his fellow cardinals had wondered about Pope Benedict’s health.

“Although we didn’t know about this, we were thinking ‘How much longer can he be the head of the church?'” the cardinal said.

A representative of the Mexican bishops’ conference was surprised by the announcement despite recognizing Pope Benedict’s declining health.

“I thought at first, ‘This isn’t true,'” said Auxiliary Bishop Eugenio Lira Rugarcia of Puebla, secretary-general of the conference.

“The church won’t be left in the lurch,” the cardinal said.

“As Pope Benedict XVI has said, we are in God’s hands, which are the best hands,” he added.

Ecumenical Patriarch Bartholomew of Constantinople, first among equal of Orthodox leaders, expressed sadness over Pope Benedict’s resignation, but credited him for leaving “an indelible mark on the life and history of the Catholic Church, sealed not only by his brief reign but also by his great contribution as a theologian.”

AsiaNews reported that the patriarch credited the pope for being a “faithful servant of the sacred cause of union of us all.”

Jewish leaders in Israel credited Pope Benedict for strengthening relations between Jews and the Vatican.

“I pray that his legacy is preserved and that the trends he led will continue since the relations between the rabbinate and the church during his term were the best ever,” Rabbi Metzger said.

German Chancellor Angela Merkel said the pope, a native of Germany, had her “utmost respect” for his decision to resign.

“The pope’s words will accompany me for a long time to come,” said Merkel, the daughter of a Protestant pastor. She praised the pontiff for maintaining “a lively interest in the process of European unification” as well as promoting interdenominational and interfaith dialogue.

U.S. President Barack Obama fondly recalled meeting Pope Benedict in 2009 and said he “appreciated our work together over these last four years.”

“I wish the best to those who will soon gather” to choose his successor, he said.

Contributing to this story were Simon Caldwell in Manchester, England; James Martone in Istanbul; Peter Ajayi Dada in Lagos, Nigeria; and David Agren in Mexico City.

PREVIOUS: List of potential cardinal-electors for a papal conclave

NEXT: Pope Benedict’s resignation will set in motion period of transition