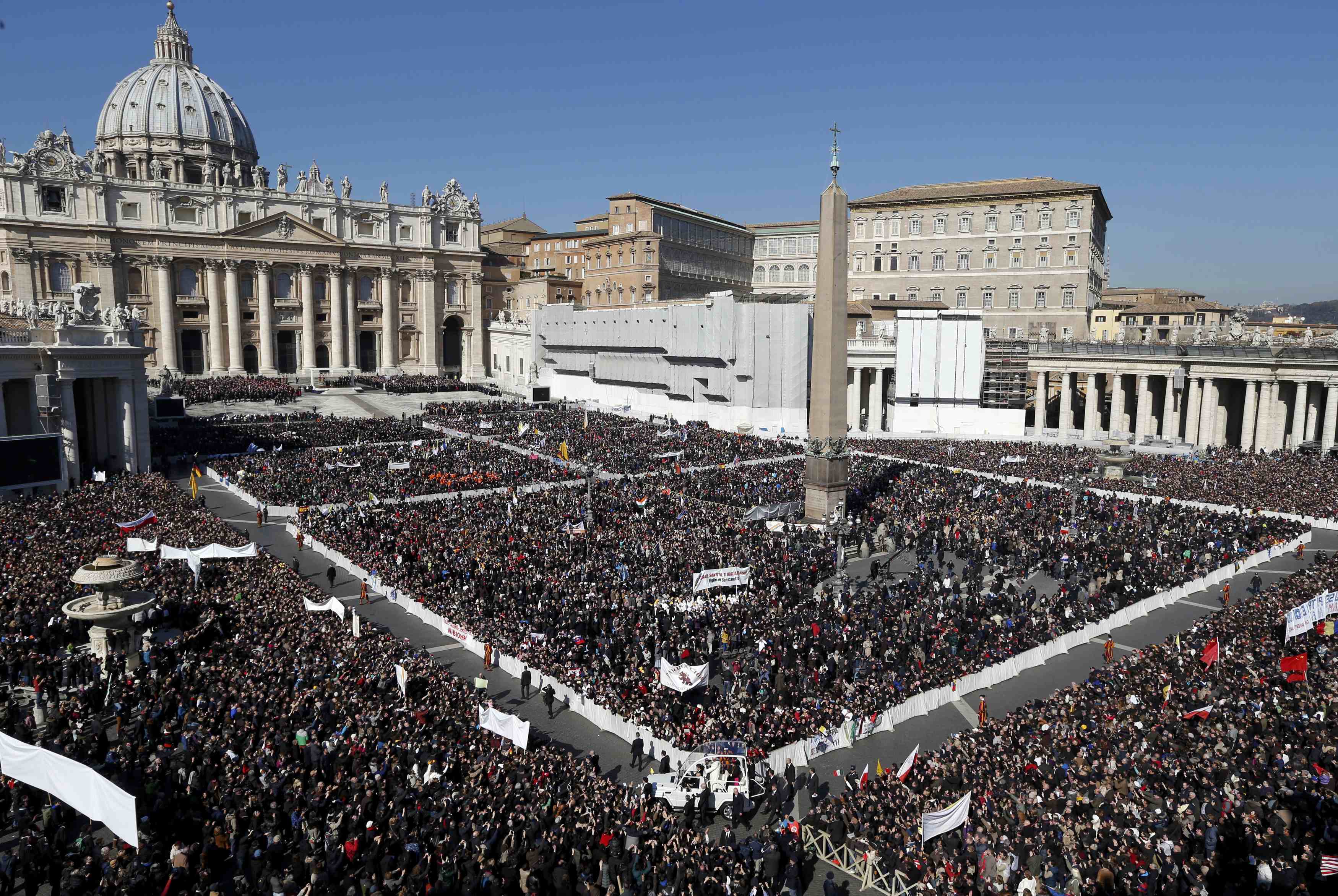 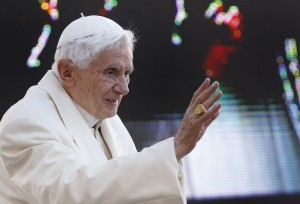 VATICAN CITY (CNS) — On his last full day as pope, Pope Benedict XVI delivered an unusually personal and emotional farewell address, thanking the faithful around the world for their support and assuring them that he would remain in their service even in retirement.

“I will continue to accompany the path of the church with prayer and reflection, with that dedication to the Lord and to his bride that I have tried to live every day till now and that I want to live always,” the pope told a crowd in St. Peter’s Square Feb. 27, the eve of his resignation.

“There have been moments in which the waters were turbulent and the wind contrary, and the Lord seemed to be asleep,” Pope Benedict said. “But I have always known that the Lord is in that boat and that the boat of the church is not mine, it is not ours, but it is his and he does not let it sink.”

Under a clear blue sky with temperatures in the low 40s, the pope arrived for his last public audience shortly after 10:30 a.m., standing and waving for almost 15 minutes as his white popemobile made a circuit through the square. Cheering pilgrims waved national flags and banners with slogans such as “always with the pope” and “you will never be alone.”

The crowd spilled over into the adjacent Via della Conciliazione, which had been closed to motorized traffic, and the Vatican estimated turnout at 150,000.

Abandoning his usual practice of giving a catechetical talk on a devotional text or theme at public audiences, the pope spoke about his time as pope and his historic decision to resign. He looked tired but composed as he read his speech, and he smiled at the frequent interruptions by applause.

Pope Benedict recalled his almost eight-year pontificate as a time of “joy and light, but also difficult moments.”

“The Lord has given us so many days of sun and light breeze, days in which the catch of fish has been abundant,” he said, likening himself to St. Peter on the Sea of Galilee.

“There have also been moments in which the waters were turbulent and the wind contrary, as throughout the history of the church, and the Lord seemed to be asleep,” he said. “But I have always known that the Lord is in that boat and that the boat of the church is not mine, it is not ours, but it is his and he does not let it sink.”

The pope, who announced Feb. 11 that he would step down because his “strengths, due to an advanced age, are no longer suited to an adequate exercise of the Petrine ministry,” told the crowd that he had made his decision “in full consciousness of its gravity and also novelty, but with profound serenity of soul.”

Although he would be retiring to a life of prayer, meditation and study in a monastery inside Vatican City, he said, he would continue to serve and sacrifice for the church.

“Whoever assumes the Petrine ministry no longer has any privacy,” he said. “He belongs always and totally to all, to the whole church.

“My decision to renounce the active exercise of the ministry does not revoke this,” he said. “I am not returning to private life, a life of trips, meetings, receptions, conferences, etc. I am not abandoning the cross, but remain in a new way beside the crucified Lord. I no longer carry the power of office for the government of the church, but in the service of prayer I remain, so to speak, within St. Peter’s precincts.”

The pope thanked his collaborators in the Vatican, making special mention of Cardinal Tarcisio Bertone, who as secretary of state is the highest Vatican official. Cardinal Bertone, who has drawn blame for the mismanagement sensationally documented in the 2012 “VatiLeaks” of confidential correspondence, “has accompanied me faithfully in these years,” the pope said.

The pope thanked the cardinals, some 70 of whom sat near him in front of St. Peter’s Basilica, and who are expected to begin meeting March 4 to plan the election of the next pope. Pope Benedict also voiced his gratitude to other members of the hierarchy, the Vatican diplomatic corps and “all those who work for good communication,” a category presumably including the press.

Pope Benedict acknowledged messages he had received over the preceding two weeks from heads of state, religious leaders and other dignitaries. But he made special mention of letters from “simple people,” who he said had written to him not as to a “prince or a great man whom they do not know,” but as “brothers and sisters or sons and daughters.” The pope called their expressions of affection and solidarity “reason for joy at a time when so many speak of the (church’s) decline, but we see how the church is alive today.”

The conclusion of the pope’s talk set off a two-minute standing ovation, which he acknowledged by smiling broadly and standing with outstretched arms.

According to the Vatican spokesman, Jesuit Father Federico Lombardi, the pope’s speech was the last of his pontificate. No papal address was expected at his farewell meeting with cardinals scheduled for the next day.

The audience was also the last opportunity for large numbers of the public to see the pope in person before his resignation was to take effect at 8 p.m. Feb. 28. He was expected to greet several thousand people that evening in the small town square of Castel Gandolfo, 15 miles southeast of Rome, in front of the papal summer residence where he will live until the end of renovations at his permanent home in Vatican City.