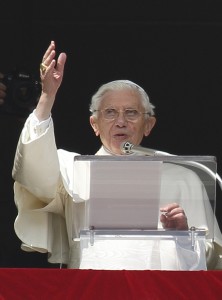 VATICAN CITY (CNS) — Pope Benedict XVI’s disgust over the abuse scandals marring the church was made evident even before his election as pope.

In his forceful Way of the Cross meditations, which he wrote as Cardinal Joseph Ratzinger in the few weeks before his election as pope in 2005, he wrote for the world to hear: “How much filth there is in the church, and even among those who, in the priesthood, ought to belong entirely to him.”

That straightforward attitude, coupled with sympathy for victims and commitment toward prevention, marked much of the pope’s subsequent eight years as pope.

“Pope Benedict XVI will certainly be remembered for his extraordinary reply and response to the very sad phenomenon of sexual abuse of minors by the clergy,” Auxiliary Bishop Charles Scicluna of Malta told Vatican Radio. The bishop was promoter of justice at the Congregation for the Doctrine of the Faith, handling accusations of clerical sex abuse from 2002 to 2012.

Pope Benedict’s approach to the scandal consistently was to see it as a result of serious sin that has polluted the church; the process of cleansing must be serious and profound, he said, but it also must acknowledge Christ’s power to heal and to strengthen the church.

The Congregation for the Doctrine of the Faith — formerly headed by Cardinal Joseph Ratzinger — in 2003 expedited the process for laicizing priests guilty of sexually abusing minors. After his election in 2005, Pope Benedict worked immediately to address more concerns.

Ever since 2001, when Blessed John Paul II charged the Congregation for the Doctrine of the Faith — then headed by Cardinal Ratzinger — with the authority to take over cases from local bishops for investigation, Pope Benedict was aware of many examples of abuse. It was his office in 2003 that expedited the process for laicizing priests guilty of sexually abusing minors.

While the congregation had been generally praised for its level of expertise and cooperation in handling these cases, some U.S. bishops had asked at the time that the process be speeded up.

After his election in 2005, Pope Benedict worked immediately to address some lingering concerns.

He approved a decision to sanction Father Marcial Maciel Degollado, founder of the Legionaries of Christ, who was accused of sexually abusing minors. Though no canonical process was begun against the late priest, he was removed from exercising his priestly ministry publicly in 2006 following a Vatican investigation.

The pope also urged Irish bishops during their “ad limina” visits to the Vatican in 2006 to establish the truth of past sex abuse cases, take steps to prevent future crimes and bring healing to the victims.

“The wounds caused by such acts run deep, and it is an urgent task to rebuild confidence and trust where these have been damaged,” the pope told them at a time when Irish church leaders had stepped up measures for dealing with hundreds of allegations of clerical sexual abuse.

As new revelations of abuse hit the news, particularly in Europe, Pope Benedict and his top aides looked for ways to refine policies for handling accusations and strengthening child protection programs worldwide.

He approved the revision of church law in 2010 on handling priestly sex abuse cases, streamlining disciplinary measures, extending the statute of limitations and defining child pornography as an act of sexual abuse of a minor. The revisions codified and clarified practices that had been implemented through special permissions granted over the past decade and made them part of universal law. The Vatican said the changes allowed the church to deal with abuse more rapidly and effectively, often through dismissal of the offending cleric from the priesthood.

Under Pope Benedict’s leadership, in 2011, the doctrinal congregation asked every bishops’ conference in the world to submit guidelines for assisting victims; protecting children; selecting and training priests and religious; dealing with accused priests; and collaborating with local authorities.

He met with victims of abuse in Australia, Malta, Great Britain and the United States, acknowledging the horror of abuse and the shame of a slow church response.

The pope’s personal meetings with victims also stood as a sign and encouragement to the world’s bishops or their representatives to also meet with victims of abuse and their families.

The pope wrote a pastoral letter to Catholics in Ireland and addressed victims directly.

“You have suffered grievously and I am truly sorry,” he wrote. “I know that nothing can undo the wrong you have endured. Your trust has been betrayed and your dignity has been violated.”

Pope Benedict ordered an apostolic visitation of Ireland’s four archdioceses, its seminaries and its religious orders and put U.S. Archbishop Charles J. Brown, a longtime official at the Congregation for the Doctrine of the Faith, in charge of the nunciature in Ireland. The move came after the previous nuncio, Archbishop Giuseppe Leanza, was recalled in 2011 after an independent judicial report accused the Holy See of being “entirely unhelpful” to Irish bishops trying to deal with abuse.

In Ireland and elsewhere, the pope removed bishops accused of abuse and other improprieties or who were found to have covered up the sexual crimes or misconduct of their own clergy.

Nonetheless, Pope Benedict still came under fire by some victims’ advocates for a lack of transparency and for having not done enough as pope and as former prefect of the doctrinal congregation.

One case in particular was the decision not to laicize a Wisconsin priest who had probably molested about 200 children, despite the recommendation of his bishop that he be removed from the priesthood.

By the time the Vatican learned in the late 1990s of the case of Father Lawrence C. Murphy, the priest was elderly and in poor health. The Vatican suggested that the priest continue to be restricted in ministry instead of laicized, and he died four months later.

It was only under new Vatican rules established in 2001-2002 that the doctrinal congregation was empowered in very grave and clear cases to laicize priest abusers without going through an ecclesiastical trial.

Accusations also hit close to home in 2010 when a priest, convicted in 1986 of sexually abusing children, was suspended from active ministry by the Archdiocese of Munich and Freising.

In 1980, following an allegation of abuse, the priest arrived in the archdiocese to undergo treatment. Then-Cardinal Ratzinger approved the transfer that called for the priest to live in a parish rectory; however, the archdiocesan vicar general — without the cardinal’s knowledge — assigned the priest to a Munich parish, where he had contact with children.

At a Mass marking the end of the Year for Priests in 2011, Pope Benedict said that what had been planned as a year of celebration became a “summons to purification.”

“In this very year of joy for the sacrament of the priesthood, the sins of priests came to light — particularly the abuse of the little ones, in which the priesthood, whose task is to manifest God’s concern for our good, turns into its very opposite,” the pope said during a Mass with about 15,000 priests.

Bishop Scicluna told Vatican Radio that the pope showed great compassion to the victims of abuse.

“His words will remain with us as a clear sign of the determination of the church to respond adequately to abuse and also to safeguard the innocence of our children and young people,” he said.

PREVIOUS: Cardinal Wuerl: Confronting secularism a priority for next pope