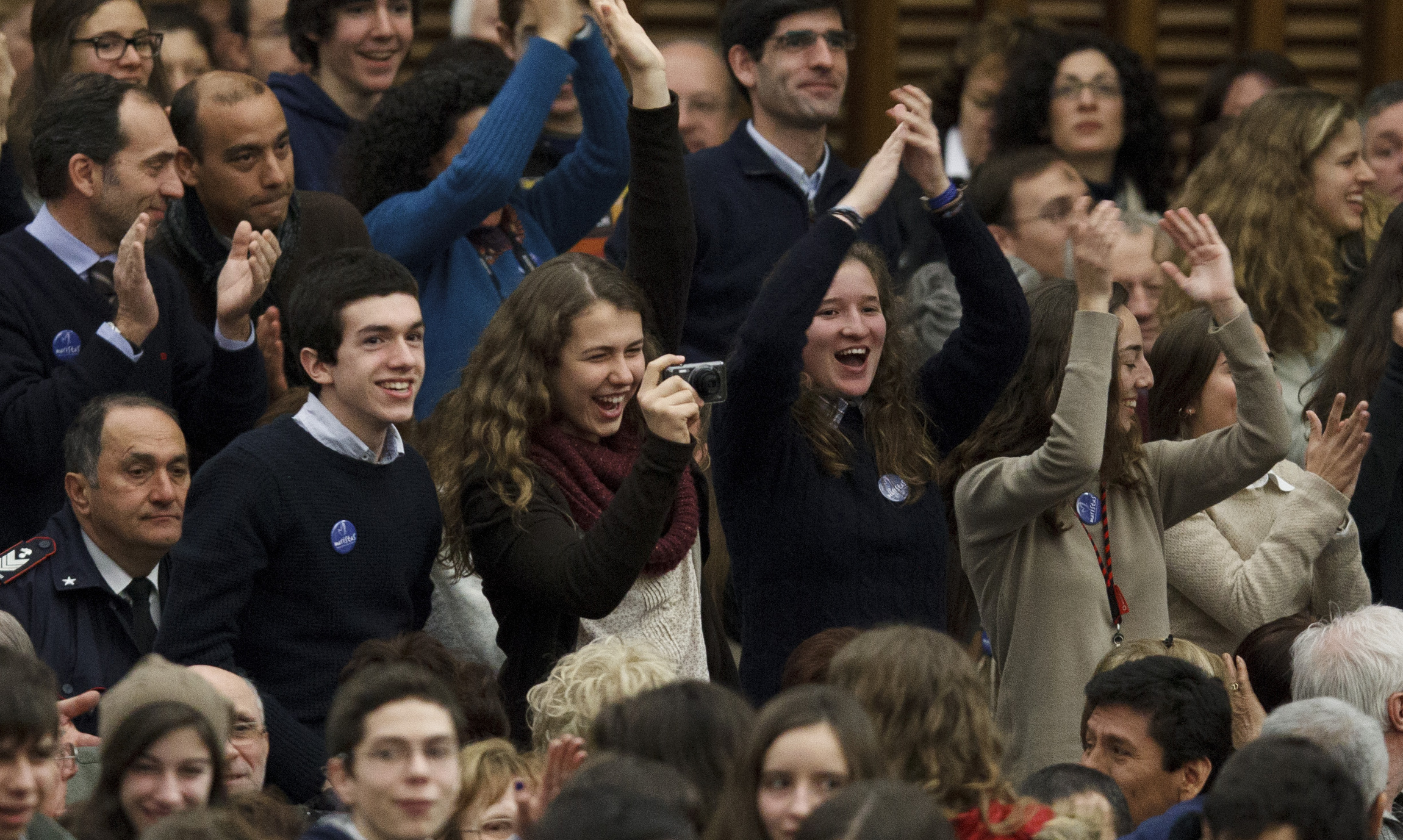 Compared to his other public events, this time the chants and cheers had more punch; loud, long supportive applause erupted more often, and the singing had the air of adieu.

Some 7,000 pilgrims from all over the world filled the Paul VI audience hall Feb. 13 to hear what was to be the pope’s penultimate weekly general audience.

For many, it was their first and last time to see Pope Benedict in person and reflect on what he has given the church and how he has inspired their own lives.

“The way he treats Christ and teaches us to treat Christ as a person who doesn’t take anything away from our lives, but gives us everything” was the biggest inspiration for Father Carlos Azcona of Burgos, Spain.

“When you become a priest, you’re given a different way to treat Christ,” and the way the pope urges people to seek a more “intimate way of knowing Jesus Christ” meant a lot to him, said the young priest, who was ordained last June.

The priest said the most important thing the pope left the church was “his teachings on the liturgy” and his many writings, especially his trilogy on Jesus of Nazareth.

“He always taught in a very simple, understandable way; everything is short but (filled) with such content that we will have to take some time to give it the right value to what he has written.”

For Carolyn Holmes of Baton Rouge, La., the most important thing the pope has given the church is his peaceful, humble presence.

“It’s more powerful when it’s not said with words” as he shows, she said.

He exemplifies the peace and humility “that’s missing in the world, and our kids need to see this,” she said. Holmes was accompanying her daughter’s public high school choir that had been traveling and singing around central Italy.

“I’m not a Catholic, but he gave me a love for God and the transcendent,” she said. She had experienced this elsewhere, she said, “but never before from a pope.”

Holmes said the pope lacks political powers, cutting-edge technology and personal wealth, “but everything God values most, he has.”

Faith Wheat of St. John’s Parish in Trowbridge, England, is a teacher and said he loves how the pope teaches “how young people are vital to the church.”

He has set a standard that a pope “has got to be compassionate, understanding toward all people as well as generous and hospitable,” she said.

Many pilgrims highlighted Pope Benedict’s humility as his most essential quality and one that would be important for the next pope to have.

Sarah Large of Trowbridge said she was in London during Pope Benedict’s visit in 2010 and was so impressed by the warm welcome he received, which she said was due to his dedication to ecumenical and interfaith dialogue.

A pope must have the same quality that Pope Benedict had, Large said, that of “uniting people around the world through faith. We need someone who will do that again with the humility he has. It’s a tough job.”

Father Azcona said the pope’s “has always been very courageous, and this, too, is an example for us: how to face a situation people normally avoid like aging, getting older and death,” he said.

“He is facing it as a very normal, human thing and is doing it because of his humility; without it you can’t be courageous either,” the priest said.

The pope was visibly moved by the outpouring of support, smiling and waving as people waved flags, banners and chanted “Benedetto” and “Viva il papa.”

His eyes lit up during the many choir groups’ brief renditions.

After children from an Italian elementary school sang “Praise to the Lord, the Almighty” in German, the pope said, “Thank you for this gift of songs that are particularly dear to me,” he said.

“We’re so honored” to be able to sing “Cry Out and Shout” in the presence of the pope, said Caroline Campbell, a choir member of Baton Rouge Magnet High School.

“You could feel the environment was very supportive of the pope, she said.

Contributing to this story was Lauren Colegrove in Rome.

PREVIOUS: Pope Benedict thanks faithful, asks them to pray for next pope