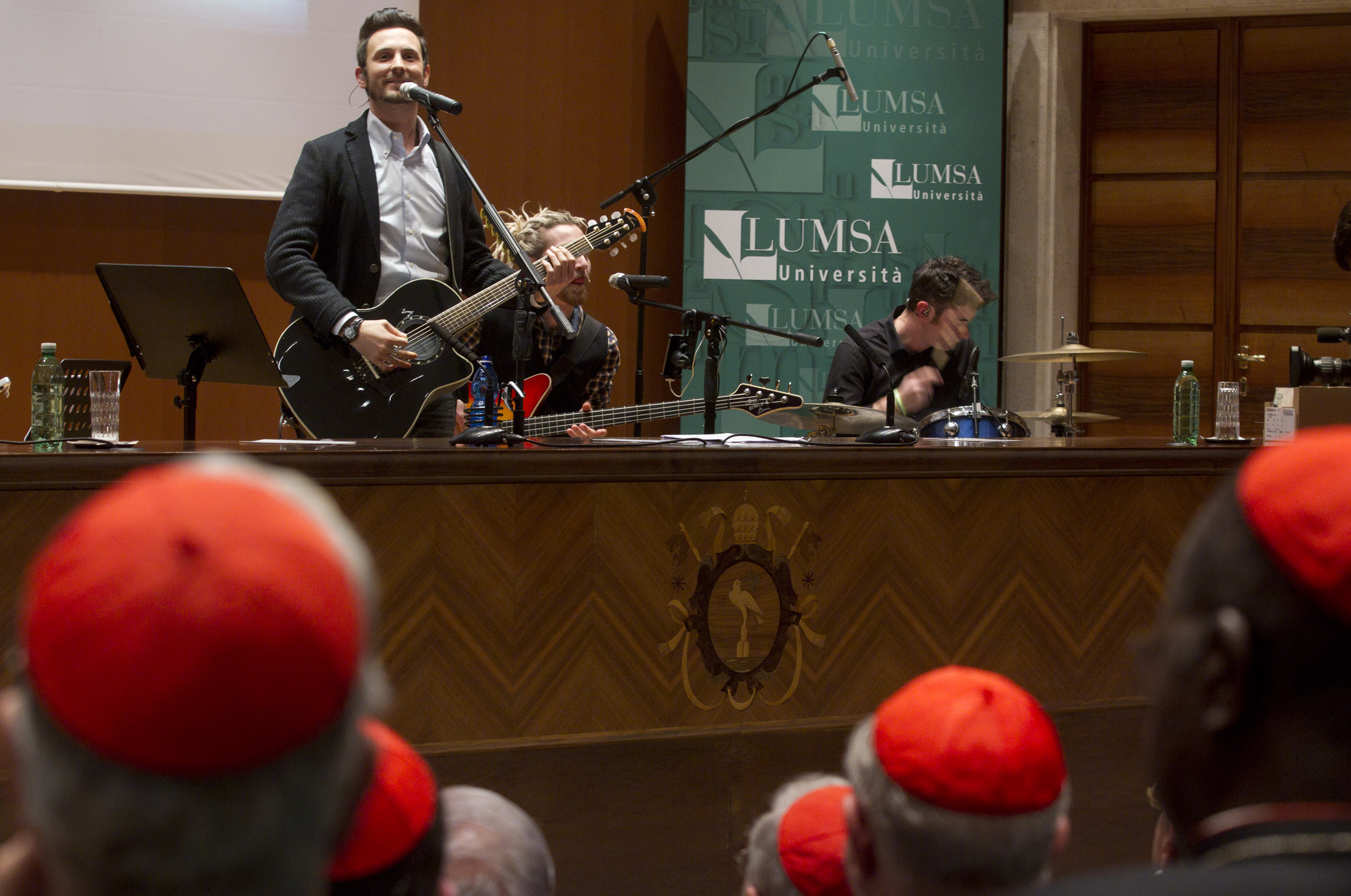 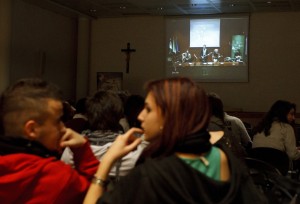 Young people in an overflow room in Rome watch a video feed of a concert by the Italian rock group The Sun. The Feb. 6 concert, sponsored by the Pontifical Council for Culture, opened the Feb. 6-9 plenary assembly of the council. (CNS photo/Paul Haring)

VATICAN CITY (CNS) — When the head of the Pontifical Council for Culture said he wanted to listen to what today’s young people had to say, he wasn’t afraid to hear it belted out at 100 decibels.

Cardinal Gianfranco Ravasi invited members of the Italian rock group, The Sun, to speak their minds through music to the cardinals, bishops, lay members and advisers of the council, as well as to a large contingent of foot-stomping, cheering young fans. (Watch a video of The Sun performing their song, “Rain”.)

The band’s 30-year-old lead lyricist and singer, Francesco Lorenzi, confessed that despite being used to playing stadiums with tens of thousands in the audience, knowing “we’d be playing for cardinals, bishops, ambassadors and journalists, we didn’t get any sleep last night.”

It was the first time a Vatican dicastery had a rock group as the “opening act” of its plenary assembly — usually a routine, speech-filled, sit-down affair where members come together a few days days to discuss a relevant theme.

But if the culture council was going to discuss “Emerging Youth Cultures” for their plenary at the Vatican Feb. 6-9, then what better way to get a feel for the subject than by inviting young people in, the cardinal said.

“The church has lots of beautiful things to say” about things young people care about, “but it needs to find a way to say it,” said Francesco Lorenzi, singer for the Italian punk band The Sun.

“We adults, older generations, and we priests have to make an effort to not put (young people) under a sort of microscope, but go to their level and begin to listen a little to what the rhythm of their mind, their heart is like,” Cardinal Ravasi told Vatican Radio.

The Sun’s rhythm, created by two guitarists, a bass player and drummer, shook the walls of Rome’s LUMSA University Feb. 6 as the group delivered songs about their Catholic faith such as “Onda Perfetta” (“Perfect Wave”) that says: “I have a whole world full of hopes and dreams, they’re illusions only if you don’t believe.”

While Vatican VIPs weren’t dancing in the aisles, many read through the lyrics and applauded with smiles.

In between songs, Lorenzi explained the band’s evolution from its birth in 1997 as Sun Eats Hours, which is an Italian saying equivalent to “time is fleeting, so get as much out of life as possible,” to being voted the “best Italian punk band in the world” in 2004.

They lived up their name, he said, traveling the globe, opening for world-famous acts like The Cure and Ok Go and experiencing enormous success.

But instead of feeling happy, the band members were angry and barely spoke to one another, Lorenzi said, losing themselves and each other in a nonstop revelry of “alcohol, drugs and women.”

Lorenzi started to turn his life around in 2007 when a night out with friends fell through and his mother suggested he instead go to a faith formation course being held that week at the local parish.

“I know you love me,” he said he told his mother, “but I want to be happy and I don’t go to church to be happy.”

But he agreed to just see what it was like, even though he was certain it would be miserable and they’d make him “sing awful songs.”

Instead, the warm welcome and genuine joy he saw on people’s faces “really struck me.”

“I saw a joy I never saw before and at a place I thought was for nerds. But it was the kind of joy I needed more than ever,” he said.

Bolstered by a new community, prayer, Mass and eucharistic adoration, Lorenzi’s life changed completely, he said. The other band members saw the transformation and slowly — over a period of five years — followed suit, wanting to discover the source of Lorenzi’s contagious happiness.

The band members had a new mission in life and on stage, Lorenzi said; they cut the band name down to The Sun “because it shines forever” and focused the lyrics on “what matters most in life,” like love, friendship, “life after life” and faith in God.

He told Catholic News Service that people don’t need to “hit bottom” before they discover the beauty of salvation.

“Jesus will come and get you, trying up until the very end, but that doesn’t mean you have to hit bottom, because he’ll take you even when you’re doing fine,” he said.

Telling council members The Sun wanted to help the church bridge the gap with young people, Lorenzi offered a booklet summarizing the results of an informal survey he took with readers of his blog, www.francescolorenzi.it. Over two weeks, some 25,000 people read the post, and hundreds sent responses to his three questions.

Asked “what helps attract young people to the church?” the responses included, “credible and enthusiastic witnesses,” but also pilgrimages to the Holy Land, a chance to have a personal spiritual guide and outlets for artistic expression, the booklet said.

“What do you want from the church?” evoked responses like greater trust in laypeople, putting the great questions of life front and center, and clear, sincere honest dialogue where formality and abstract ideas get set aside now and then, it said.

“What keeps the church and young people apart?” elicited replies like not understanding the reasons behind positions the church takes, “ostentatious wealth,” a lack of answers to people’s questions and poor communication skills.

“The church has lots of beautiful things to say” about things young people care about, “but it needs to find a way to say it” and have that message reach young men and women everywhere, Lorenzi said.

But even the most stirring speech or web post can’t answer people’s hunger for human contact and understanding, Lorenzi told CNS.

“A great speech without contact is at risk” of going nowhere, he said, while if it’s coupled with warm and genuine outreach, “the incredible can happen.”