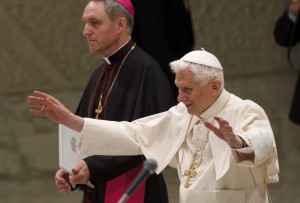 VATICAN CITY (CNS) — Young people’s essential needs, including decent work and an education, demand a serious, effective response from both the church and the wider community, Pope Benedict XVI said.

Problems facing young people “cannot be met with responses that are evasive or banal,” he said, especially if humanity is going to have a hopeful, generous future.

The pope made his remarks Feb. 7 during an audience with members and advisers of the Pontifical Council for Culture. The council was hosting a plenary meeting at the Vatican Feb. 6-9 on “Emerging Youth Cultures.”

The vast majority of people under the age of 25 live in developing nations, and the pope said these young people represent “a challenge to the world of globalized consumerism and the culture of entrenched privileges of which a small segment of the population of the western world benefit.”

“Consequently, youth cultures are also ’emerging'” in the sense that they are showing signs of important unmet needs that should be addressed, he said.

Today’s young people are showing in many different ways “a deep need, a call for help or even a ‘provocation’ that cannot be ignored or left out either by civil society or the church community,” he said.

The pope highlighted his and the church’s concern about the crisis in education and the labor market as well as “other ’emergencies’ that touch on the different dimensions of the human person and his fundamental relationships.”

If these issues aren’t dealt with adequately, the world and all of humanity will experience not only “economic and social impoverishment, but a human and spiritual one as well,” he said.

“If the young no longer hope or progress, if they don’t put their energy, their vitality and their ability to look toward the future into the flow of history, then we will find a humanity that is locked in itself, lacking both confidence and a positive attitude toward the future.”

The pope said despite “the many problematic situations” affecting young people, their faith in God and their sense of belonging to the church, “we wish to renew our faith in the young and reaffirm that the church sees their condition and their cultures as an essential and inescapable point of reference for pastoral outreach.”

The church believes in the young, their energy and generosity, the pope said, adding that the church “needs their vitality in order to continue living the mission entrusted to her by Christ with renewed enthusiasm.”