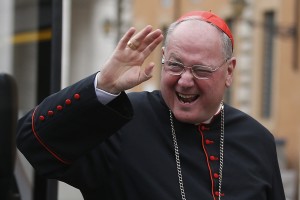 Cardinal Timothy M. Dolan of New York waves as he arrives for a general congregation meeting in the synod hall at the Vatican March 6. (CNS photo/Tony Gentile, Reuters)

VATICAN CITY (CNS) — Citing unauthorized press reports on their preparatory meetings for the upcoming papal election, the College of Cardinals agreed to a media blackout similar to one observed before the previous conclave in 2005.

The change was announced March 6 in an email to reporters from Sister Mary Ann Walsh, director of media relations for the U.S. Conference of Catholic Bishops, following the third day of pre-conclave meetings among cardinals at the Vatican.

“Concern was expressed in the general congregation about leaks of confidential proceedings reported in Italian newspapers,” Sister Walsh wrote, using the official name for the meetings, which started March 4. “As a precaution, the cardinals have agreed not to do interviews.”

In a second statement later March 6, she added, “The U.S. cardinals are committed to transparency and have been pleased to share a process-related overview of their work with members of the media and with the public, in order to inform while ensuring the confidentiality of the General Congregations.”

The statements followed the last-minute cancellation of a briefing for journalists by New York Cardinal Timothy M. Dolan and Chicago Cardinal Francis E. George, both of whom will vote in the papal election.

That briefing would have been the third by U.S. cardinals since the start of the meetings. On March 4, Cardinal George appeared with Washington Cardinal Donald W. Wuerl; the next day, Cardinal Daniel N. DiNardo of Galveston-Houston spoke alongside Boston Cardinal Sean P. O’Malley.

“This is perhaps more normal in the United States,” Cardinal Daniel DiNardo said March 5. “We’re trying to help people to have a greater understanding of what the process is,” Cardinal Sean O’Malley said.

No other national group of cardinals had made itself available to the media in a similar way, and the U.S. briefings, held at the North American College in Rome, had drawn mounting interest from the international press.

While stressing they were bound by an oath of secrecy about their discussions, the U.S. cardinals answered questions about various topics, including the possible timing of the conclave and controversies over clergy sex abuse and mismanagement in the Vatican.

Many observers voiced surprise at the U.S. cardinals’ availability, recalling the no-interview policy cardinals had observed during the last papal transition, beginning the day after the funeral of Blessed John Paul II.

“This is perhaps more normal in the United States,” Cardinal DiNardo said March 5, explaining that the briefings were intended, in part, to let “our own folks know at home that we are meeting day by day, there are interesting things happening, we’re moving ahead.”

“We’re trying to help people to have a greater understanding of what the process is,” Cardinal O’Malley said.

The Vatican spokesman, Jesuit Father Federico Lombardi, would not comment on the reasons for the blackout, but said he was not surprised that cardinals who had started with an attitude “of openness, of communication, of sharing” had changed approach in the course of their deliberations, deferring to the “sensitivity, the desire and indications of the whole College of Cardinals.”

The cardinals were on a path toward the conclave, Father Lombardi said, marked by ever increasing degrees of privacy intended to guarantee the freedom of the electors.

One longtime Vatican observer voiced disappointment that a window of openness had closed so quickly.

“It’s ironic and a bit sad that the Americans, who have been completely above board, are being shut down because someone else is leaking anonymously to the Italian press,” said John Thavis, author of “The Vatican Diaries” and former Rome bureau chief of Catholic News Service.

Italian media outlets had been running unattributed stories describing the cardinals as sharply divided, over both the timing of the conclave and how deeply to delve into the corruption and mismanagement sensationally documented in the 2012 “VatiLeaks” of confidential correspondence.

NEXT: Sistine Chapel goes from tourist magnet to polling place for pope