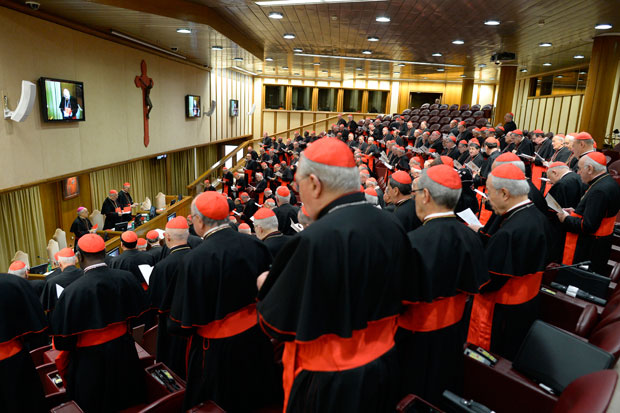 Cardinals gather in synod hall at the Vatican March 7 for one of several general congregation meetings held ahead of the conclave. (CNS/L'Osservatore Romano)

VATICAN CITY (CNS) — Cardinal electors assembled in Rome will begin voting for the next pope March 12.

Jesuit Father Federico Lombardi, the Vatican spokesman, announced the date for the start of the election, known as a conclave, in a message to reporters March 8.

The first session of voting inside the Sistine Chapel will begin in the afternoon, following a morning Mass “Pro eligendo Summo Pontifice” (“for the election of the supreme pontiff”) in St. Peter’s Basilica.

(See a graphic with details of the papal election process, Inside the Conclave)

Rules governing papal elections state that a conclave must start between 15 and 20 days after the Holy See falls vacant; but shortly before his resignation Feb. 28, Pope Benedict XVI issued a decree allowing cardinal to move up the start date if they choose.

The College of Cardinals decided the date on the fifth day of its pre-conclave meetings, after waiting for the 115 cardinals eligible and expected to vote. The last to arrive in Rome was Cardinal Jean-Baptiste Pham Minh Man of Ho Chi Minh City, Vietnam, who joined the others March 7.

At the morning session March 8, before announcing the scheduled vote, Cardinal Angelo Sodano, dean of the College of Cardinals, told the assembly that with the changes made by Pope Benedict, the cardinals would not have to debate on whether they were authorized to begin the conclave before March 15, Father Lombardi said.

During the same session, the cardinals chose 87-year-old Cardinal Prosper Grech, a Maltese expert in the early church fathers, to give the meditation at the beginning of the conclave.

The Vatican spokesman said that 18 cardinals spoke during the morning session. As people around the world observed International Women’s Day, one of the cardinals spoke about the role of women in the church.

Other topics included interreligious dialogue, bioethics, the church’s role in promoting justice, collegiality in the church and the need for the church’s evangelizers to proclaim God’s love and mercy.