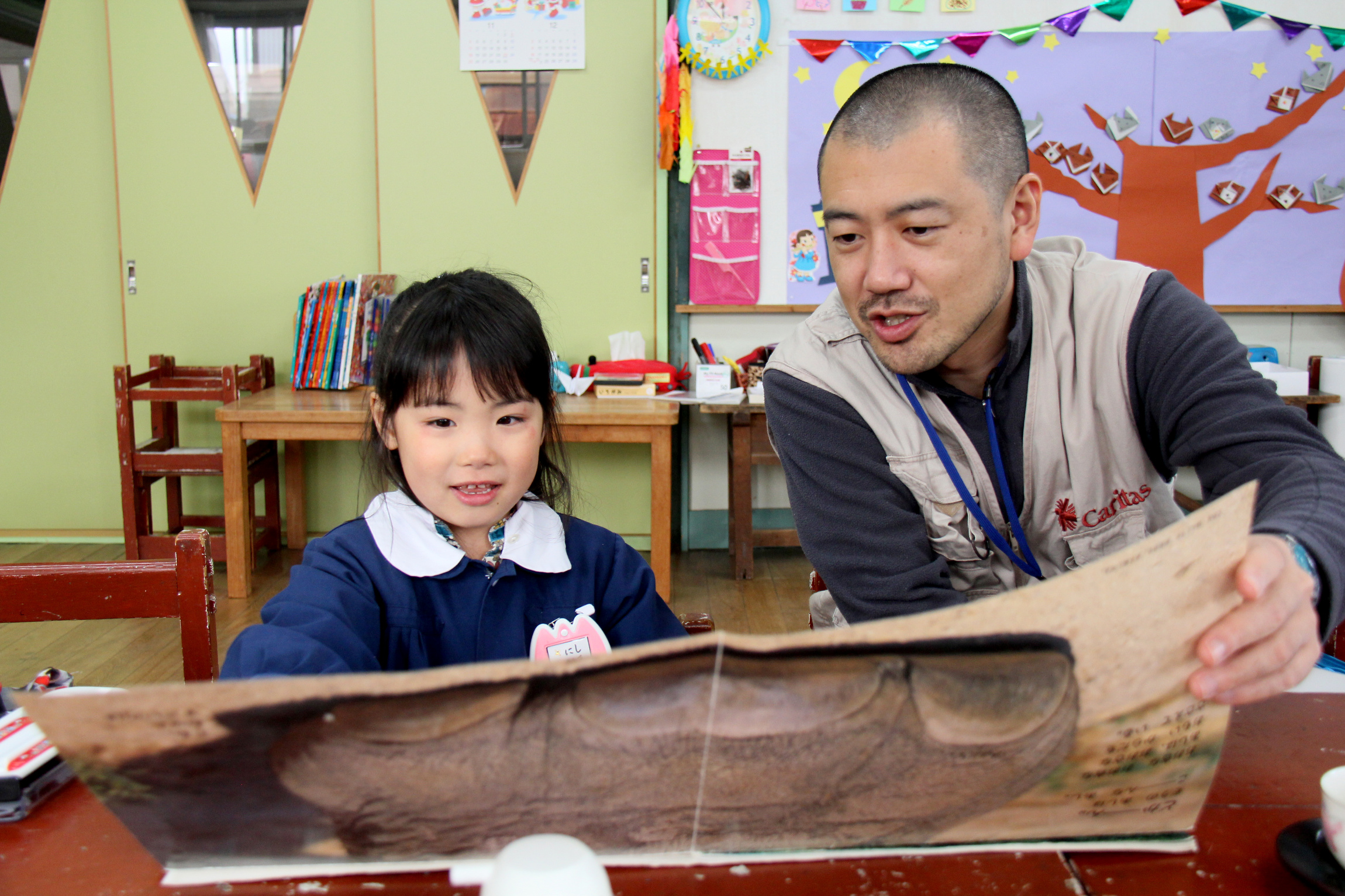 MANILA, Philippines (CNS) — Rosalinda Nakanome tries not to look at the sea very much these days.

“It’s like I’ve developed a phobia at the sight of water,” she said by telephone, thinking back nearly two years to the tsunami that washed away her home in the northeastern Japanese coastal town of Rikuzentakata.

Nakanome and her family were returning home from a shopping trip the afternoon of March 11, 2011, when they saw an enormous wall of water caused by an earlier magnitude 9 earthquake rapidly approaching. She said neighbors and bystanders panicked. They headed for a nearby mountain to escape the tsunami’s deluge.

“By the time we got to the mountain, our house was damaged. … We couldn’t return,” Nakanome said.

The house and all its contents were gone but the whole family — her two small children, husband and in-laws — were safe. Today they continue to live in cramped quarters in temporary housing, like thousands of others.

In some communities life is somewhat better, but the trauma of the disaster remains.

The earthquake and tsunami left nearly 20,000 people dead or missing and hundreds of thousands homeless.

“If you visit places hit by the tsunami, you see nice buildings, and also kids going to school, people going to temporary shopping malls,” said Divine Word Father Daisuke Narui, executive director of Caritas Japan. “They do their work, they do daily living. But their mental side … they need help.”

Father Narui said in a telephone interview that counseling is the biggest need for survivors who have lost loved ones, homes and entire communities.

A major component of Caritas Japan’s outreach is in-home visits, what Father Narui calls “tea sessions.” The visits involve young volunteers who chat with survivors, most of whom are elderly.

Before the disaster, the region had long been suffering the effects of rural flight as young people seek opportunities in major metropolitan areas.

“Through this kind of session those victims could release the bad effects of trauma,” Father Narui told Catholic News Service. “Moreover, they feel that they are not abandoned. Before the tsunami they felt they are abandoned people. Their sons, their daughters are in the city, and they don’t come back or they don’t visit.”

The U.S. bishops’ Catholic Relief Services is supporting Caritas Japan’s efforts in the tsunami- ravaged area. Greg Auberry, CRS Asia regional director, said the nature of the response is somewhat different than in other areas because Japan is a developed country. Government has the infrastructure in place to support the citizens, but he explained that safety remains an issue, slowing the rebuilding of homes and resettlement.

Auberry said the Caritas visits are a lifeline for residents dealing with the stress and anxiety of possibly moving back to a home associated with trauma or moving somewhere entirely new.

“So these people are basically in a bit of a holding pattern for two years,” he said. “So you can imagine … a lot of these elderly people are (temporarily) living in a new place, with new neighbors.”

Nakanome, 38, misses her friends and neighbors. She said people were separated when the government placed them in emergency shelters and then temporary housing: prefabricated single rooms that are shared by lots of people.

“We talk with the volunteers sometimes, if we’re a little scared,” she said. “Sometimes we’re not so sure about who we’re living with, if they’re okay, if we’ll get along.”

Nakanome said she is grateful for the emotional support she gets from the Caritas volunteers. She called them good listeners.

The sea vegetable factory in Rikuzentakata where Nakanome worked was swept away by the giant wave. After losing her home and her job to the tsunami, she visited a local church often and was offered part-time work as a cook for the Caritas volunteers.

“Caritas has been a very big help,” she told CNS.

Father Narui said the focus is on supporting survivors as much as possible, because helping others is one way to live the Gospel.

“We listen to people,” he said. “Those victims are very important for us, and we just accompany such small and vulnerable people.”

PREVIOUS: In farewell to cardinals, Pope Benedict pledges obedience to next pope