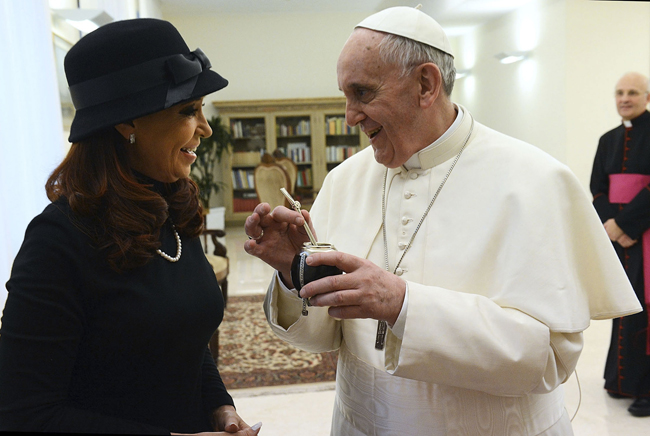 The previous day, the pope met with the superior general of the Jesuits, Father Adolfo Nicolas, but the Vatican released no information about that meeting.

The pope also greeted Fernandez’s presidential delegation at the residence, where he is living until the papal apartment has been renovated.

Father Lombardi told journalists there would be no official communique from the Vatican about the meeting since the encounter was “very informal.”

Pope Francis and “Los Kirchner” — Fernandez and her late husband, former President Nestor Kirchner — occasionally clashed over social issues such as gay marriage and abortion. During one Mass for public officials, Pope Francis criticized perceived corruption, and the presidential couple reportedly began attending Mass outside the city. Nestor Kirchner, who died in 2010, served as president 2003-2007, when he was succeeded by Fernandez.

However, Pope Francis also spoke out against corruption in governments prior to the 2001 Argentine economic crisis, said Sergio Berensztein, an independent political analyst in Buenos Aires.

“Cristina never tolerated that (Cardinal Jorge Mario) Bergoglio was a person so prestigious, influential and critical of them,” Berensztein said.

“They never tolerated limits being put on their power, and Bergoglio represented a significant limit.”

He said he expected the relationship to change as Pope Francis assumes his new position.

“Bergoglio is a very generous person, and I’m sure that his meeting Cristina is a manifestation of his … new role,” he said.

Contributing to this story was David Agren in Buenos Aires, Argentina.

NEXT: Salvadoran clergy hopeful for canonization of Archbishop Romero