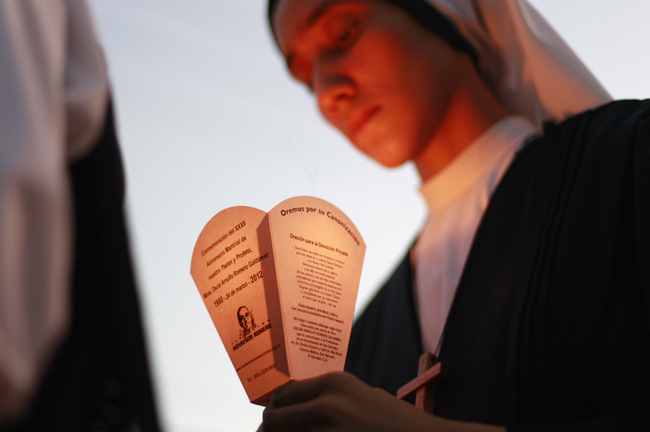 “We are in the best of circumstances. The time is ripe for a final verdict,” Auxiliary Bishop Gregorio Rosa Chavez of San Salvador told Catholic News Service, referring to Pope Francis, who as Cardinal Jorge Mario Bergoglio was archbishop of Buenos Aires, Argentina, until he was elected pope March 13.

The media, he said, have reported about the admiration that the new pontiff has for Archbishop Romero and the conviction that the martyred prelate should be canonized.

“The stars are aligned (for Romero’s canonization), but I insist that we should not rush. God has its time and that time will come,” Bishop Rosa Chavez added.

The canonization process for Archbishop Romero began in 1994. The case is being studied by the Vatican’s Congregation for Saints’ Causes.

Msgr. Jesus Delgado also told reporters that in 2007 he spoke with Cardinal Bergoglio, who told him that if he were the pope, the beatification and canonization of the slain archbishop would the first thing he would pursue.

In another meeting in 2010, Msgr. Delgado said Cardinal Bergoglio recalled what he said about Archbishop Romero in 2007, but added that the problem was that he would never become pope.

When Cardinal Bergoglio was elected pope, Msgr. Delgado told local media it was “a wonderful surprise,” and that he thought it was time that Archbishop Romero became a saint.

Archbishop Romero was a staunch defender of the poor and criticized the human rights violations of the military junta that ruled El Salvador beginning in October 1979. His outspokenness led to his assassination.

Regardless of how the canonization advances, “the Salvadoran people have named him saint long ago,” Bishop Rosa Chavez said of Archbishop Romero.